Wołyn dreams a dream of the past,

These words describe my Wołyn, the land of my childhood. My osada was here – Ułanówka, 15 km from Włodzimierz Wołyński and about 3 km from the main highway leading from Włodzimierz to Łuck.

This was the only paved highway (asphalt), on which bus traffic had started just before the war in 1939; there were no other roads with hard surfaces. Everywhere else the roads were rutted by the wheels of carts and horse's hooves, full of sand and potholes in the summer; incredible mud and even bigger potholes in early spring and autumn; and in winter, sleighs were pulled by horses. The terrain was slightly hilly, bordered on one side by forest and on the other with meadows about 1.5 km away.

The plots were laid out on either sides of the "street" which ran perpendicular from a cross raised by the settlers on a mound at a crossroad (Halina Rafał writes about it [no. 119]). Other plots were scattered closer to the forest. We had the friendliest relationship with the Sergielis family, who lived practically in front of us across the road. Mrs. Sergielis's mother Mrs. Radomska was a good seamstress and made clothes for our family.

Here in 1927, in our hovel with a hard clay floor, I saw the light of day as the third youngest child of a settler, Jan Utnik and Feliksa Wójcik. Both my parents came from the district of  Sandomierz, near Staszów.

Our "street", also being hilly, was ideal terrain for sleighs and skis in winter, where children gathered from nearby plots. While sliding down the slope on one side of the road between Lipski’s and Sielecki’s plots, there were embankments, popularly called "wały". No one knew what secrets these embankments hid: were they made by human hands for defence purposes, or were they concealing human remains? The talk was that at night they were haunted. For me, as a child, the "wały" were always mysterious and terrifying.

One day at dusk, my mother sent me to a local store in a neighbouring village. I had to pass by the "wały". But how could I avoid the "ghosts"? I descended the road facing forward but going up the hill I walked backwards in order to keep an eye on the "wały" and any possible ghosts. I returned all in one piece with my purchases but with sweat running down my forehead and a loud heartbeat.

There was no school in our settlement. My older siblings - sister Janina and brother Stanislaw, as well as the other older children from the osada - started their education in another village, Chmielówka. Later, a 3-grade school was established in the neighbouring settlement, Wąsowicze, about 3 km away and by then all the children from Ułanówka were attending there. This also became the centre for our cultural and national activities.

The route to school offered many attractions. Not in the morning, for we had to be in school by 8 o'clock. But after classes we never went straight home, especially in summer. First stop was a playground and ball games, volleyball and baseball. We could not resist the temptation to stop by the cooperative in Chmielów for some tasty boiled sweets. Then passing by a large orchard where a Jew sold apples, one of us would buy and haggle, while the others at the same time filled their pockets for free. Green peas, turnips and carrots were grown by the road, so we tasted them all to our heart‘s content. Going to school, we had to cross a river (I don't remember the name) over a damaged bridge to meadows where tasty sorrel grew and then tempted to the woods nearby for seasonal crops of wild strawberries, hazelnuts and mushrooms. It was a wonderful life: happy, carefree; the only downsides were things like failing tests, misunderstandings between friends and teachers’ demands. Our principal, Tadeusz Nowak, was very strict and his wife Maria Nowak, ordered us to put cloth slippers on our boots before entering the classroom so as not to spoil the highly polished floor.  Once, being in a rush, I forgot to put on the slippers..... to get to the Ukrainian language class, which was mandatory. I rebelled. Some friends from school in Chmielówka had not attended this class, they stayed in the playground to play. I joined them. Some Ukrainian girls told the teacher who commanded me to return to class but I forgot the slippers. The teacher ordered me to go back and fetch them. Instead, I remained in the playground to play. The incident ended with my mother being called to school but after that I did not have to learn Ukrainian.

The Catholic parish church in Sielce was 5 km away from our settlement. We walked there or rode in horse carts, always on Holy Days of Obligation and during the year, as time and disposition allowed. My father was not very religious and if he could, he excused himself from attendance at Mass, however he never missed the Easter Resurrection Mass due to a prevailing custom in our settlement that after Mass the return home for Easter breakfast was a race! Father was a great lover of horses and he always tried his best to win leaving the poor horses foaming from exertion! Another attraction was the fair in Sielec which tended to draw even the most uninterested in religious practices out of the house. For us children the fair provided additional amusements: shopping from stalls, ice-cream, photographs with colorful backgrounds and the company of friends. We were baptized in the church in Sielec and received First Communion there.

My father’s farm consisted of 12 hectares of cultivated land and one hectare of meadow, about one and a half km from our osada. In addition, he leased a similar amount of land parallel to ours from Major Feliks Jaworski, who Halina Rafał [See no. 119] talks about. The Major's house was reached from our house by a track that ran through the middle of a field. That house was leased by a Jew called Lejba, who sometimes worked for us, especially during the building of a new house, as he was a glazier.

All the settlers in Ułanówka possessed the same size plots of land. Their beginnings date from the year 1922 judging by the date of my sister Janina's birth certificate who was born in 1923 in the village Chmielów in a "cellar" by the road, which I passed each day on my way to school in Wąsowicze.

The difficulties in the first years are not well known to me.  The problems and efforts must have been great - starting from scratch.  I remember well the last years before the war - well prospering farmsteads, depending on the owner’s knowledge, adequate homes often with a tin roof, own tools and farm implements, farm animals, fertile fields fortified with natural and chemical fertilizers that produced wheat, rye, oats, barley, buckwheat, clover, sugar beets, potatoes and corn; houses surrounded by vegetable gardens and orchards, everything our own production - fresh, natural and healthy.

My father, besides his love of horses and dogs (we always had at least three) also loved orchards.  Each year he added new fruit trees and attentively took care of them.  To us children he kept saying: "I will not pass on this land to any of you, there is going to be an enormous orchard here that is going to support me in my old age. You go and get an education and go out into the world"  - and we did go out into the world, but who could have then guessed how.

A path ran from the road up to our house  with cherry trees on both sides and by the main road there were more cherry trees, the same width as a plot. In season, these crops were bought by Jews from Włodzimierz. In May, there were swarms of cockchafers among the flowers which mischievous boys tried to drop down our collars as we were returning in groups from May devotional services at the Cross.

The increasing size of the homestead and the constant improvements in our standard of living demanded domestic help. Our parents therefore hired a maid to help with chores and a plough-boy to help with the farm work. In seasons of intensive farming activities such as fertilizing, crop picking, harvesting - additional workers were hired from nearby villages.

Overall it seemed that life with local people was harmonious. I had Ukrainians girl friends whom I often visited on the way from school, especially during their religious holidays, for "pierochy" baked with groats or other stuffing. I also befriended a Jewish girl from Chmielów, Szejwa who lived on the way to school. Sometimes there were unfriendly incidents, snow ball fights in winter time that often had to be broken up by the intervention of teachers or parents.

The true face of the locals was shown after the eastern "liberators" occupied our territory. Local Ukrainians were the first to arrest my father. They kept him in some sort of cellar where he caught such a cold that nearly cost him his life. However, he was not the only one to become a victim.

Minor official business was taken care of in the district of Mikulicze and more important matters in the county town, Włodzimierz. There we sold our harvest - grain etc, and did periodic shopping for domestic and farm needs.  My older siblings attended high school Nr.708 named after Mikolaj Kopernik and for this reason we often made trips to Włodzimierz, since they were both lodging there.

Father was a good farmer and a hard man, but he never showed any emotions. I remember seeing him cry only once - and that was after the news of the death of Marshal Józef Piłsudski when the whole household was overwhelmed by deep sorrow. However, despite all the hard farm work he never neglected his "Krakus" meetings, training or manoeuvres: that was his pleasant break away from work.

My mother was the proverbial "neck" on which the partner’s head turns at home. It was she that managed events, gave directions for family life, softened nervous tensions, but at the same time was demanding in certain things. It is to them, my parents, that I am dedicating these remembrances with my greatest gratitude. 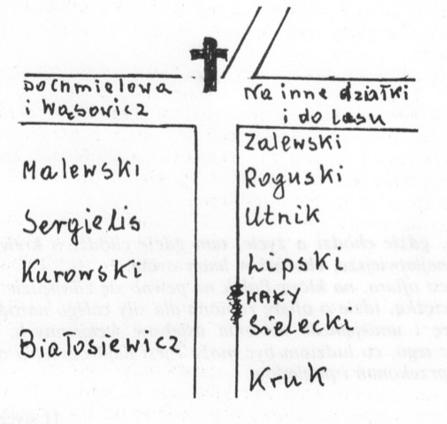