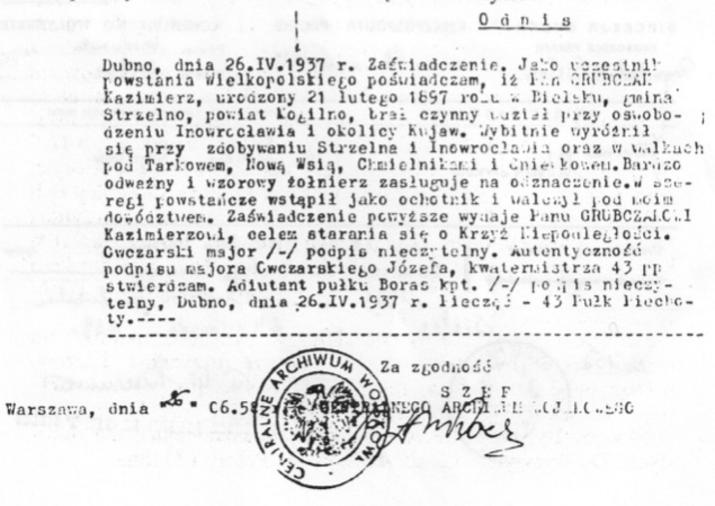 The settlement of Wielkopolanka was located in the municipality and district of Dubno. It was created following the division of the Elżbiecin estate near the village of Małe Sady in accordance with the act of 17 December 1920 that granted land to soldiers who fought for Poland's independence in the Polish Army.

The settlement was inhabited by 14 settlers, who were given the plots by the District Land Committee in Dubno, and they were registered in the Land Registry of the District Court in Równe. The plots ranged in size from 12 to 50 hectares.

The beginnings were hard and difficult. The settlers lived in an old school, part of the estate's buildings. They slowly started erecting their own homes, restored the old school to serve their children, and built a modern dairy and shop. By 1939, most of them had beautiful houses covered with zinc sheets and rich farm buildings.

Unfortunately, the war, and then the deportation to Russia on February 10, 1940, put an end to this stable and happy life.

Dubno, April 26, 1937.          Certificate.
As a participant in the Greater Poland Uprising, I certify that Mr. GRUBCZAK Kazimierz, born on February 21, 1897 in Bielsko, Strzelno municipality, Kogilno district, took an active part in the liberation of Inowrocław and the vicinity of Kujawy, he distinguished himself in the capture of Strzelno and Inowrocław as well as in the battles near Tarków, Nowa Wieś, Chmielniki and Gniewkowo. A very brave and exemplary soldier, he deserves to be honoured. He joined the insurgent ranks as a volunteer and fought under my command.
The above certificate is issued to Mr. GRUBCZAK Kazimierz, in support of an application for the Cross of Independence.
Major Owczarski / - / signature illegible. I confirm the authenticity of the signature of Major Józef Owczarski, quartermaster of 43 Infantry Regiment.
Regimental Adjutant, Boras, Captain / - / illegible signature.
Dubno, 26.1V.1937.  Seal - 43rd Infantry Regiment