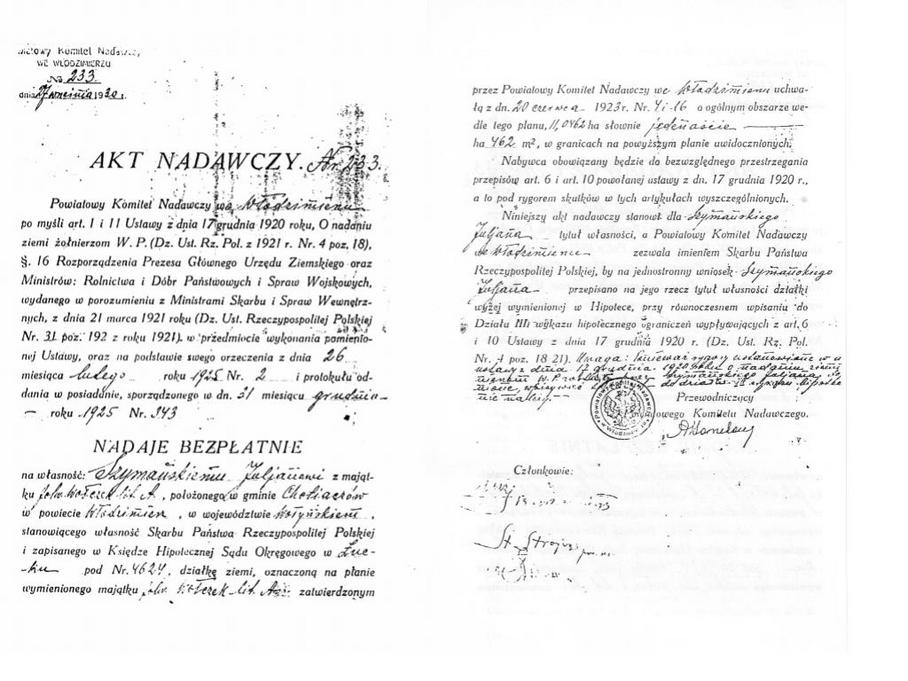 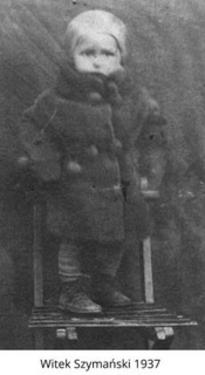 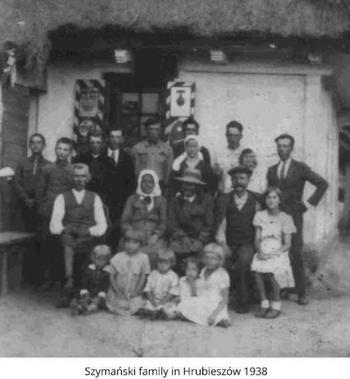 ​​The act of parliament 1920 [Translator’s note: art. I & II, dated 17. December] stated that all Polish soldiers, who had been in active service defending Poland’s frontiers, had volunteered for the army and fought for the independence of their homeland, could be rewarded with parcels of land.

The Deed of Grant Certificate No 233 (copy enclosed), states that my father Julian Szymanski was granted 11,0462 hectares of land, being a parcel of the Wółczek estate then in the ownership of the State Treasury. [Translator’s note: the previous owners had abandoned their estate]. The name of the estate was kept by the settlement.

As well as my father the other ex-soldiers who were granted land in Wółczek were: Każimierz Dąbrowski, Nadzio Golarowski, Stanisław Kaszuba, Mieczysław Skaczkowski and Dul.

Our settlement was on the eastern side of the river Bug across the river from a small town of Kryłow which was accessible only by river ferry. Włodzimierz was our county town, which was 30 kilometers away.

As WWII broke, I was only a young girl of fourteen years of age, so there is not much that I remember of life in the settlement.  However, what I do remember extremely well, is "Krakus". It was a paramilitary organisation, which united all ex-soldier settlers. What really embodied in my memory about "Krakus", was their beautiful, khaki uniforms with red stripes down the trouser seam and their collars. The members wore their uniforms with a certain pride. Their black, cavalry boots, with spurs and well-cut riding breeches, gave them a special look. They wore four-cornered caps on their heads which were adorned with a red rim and a silver eagle. A lancer’s saber at the side completed their smart uniform. I remember the great pride I felt as I waved goodbye and I watched my father saddle his horse and mount it to go on army exercises,

This idyllic, fairy tale life of mine had ended on 17 September 1939, when WWII broke out. After a short occupation by Germans came that of the Soviets. On 10 February 1940 in the dark early morning with a crisp frost, the Soviets came and forcibly transported us to Siberia.  Our family shared a tragic fate with thousands of Poles.

Our deceased parents and the Wółczek settlement remain deep in my memory and that of my siblings: Zygmunt, Genowefa, Witold, Irena and Izabella.