In my family there were five children:  (from the oldest) Janka, Heniek, Teresa, Regina (that’s me) and Jadzia.  My father Michał Sobieraj was an ex-member of Pilsudski’s Legion, four times decorated with the Polish Cross of Valour and holder of the highest Polish military decoration the “Virtuti Militari”.  He had priority in the selection of the plot of land being granted to ex-soldiers by the government.

The plot was situated on a burnt-out estate with one brick building remaining undamaged.  Also undamaged were beautiful old lime trees which surrounded the whole area.  Later Father built our house there, as well as a wood-storage shed and a barn.  In the undamaged brick building we kept all our animals which consisted of three horses, cows, pigs, poultry, etc.  Outside under an open roof Heniek kept pigeons. Father loved his animals, particularly his horses.  I know that at Christmas he shared with them blue and pink “Holy Wafers”.

In the beginning, after he got his farm we lived with other settlers in the brick building and several of the children were born there.

My father originated from Łowicz but my mother was local.  She was descended from a minor noble family from Obidowo.  She spoke a local dialect and used somewhat different vocabulary than my father.

The house stood at a crossroads:  Nowogródek was 16 km. and Niechniewicze 3 km. away.  The parish offices were in Niechniewicze and we attended church there.  We used to go through Lubcza to get to Świteź to attend the “Sea Festival”.  Across from us lived Captain Kubiałko who was my godfather.  Further on lived Krakowski and next to us lived Bajtler, a German whose daughter Irka was my best friend.

A primary school was built on the other side of the road in 1937, thanks to the efforts of all the settlers but especially my father’s.  Father donated part of our orchard for that purpose.  A tall cross with Jesus on it was also put up on the site.  Before the school was built children had to travel to the school in Niechniewicze.  The ceremony of the blessing of the school and the cross was attended by many VIPs and settlers from neighbouring settlements.  For his work on this project Father was decorated with the Cross of Merit (Krzyż Zasługi).

Beyond the road, all the way to the river Wołówka spread our meadow where our cattle grazed, looked after by our herdsman. My brother fished in the river and the rest of us bathed in it in the summer.  My older sister and her friends swam in the deep water while the younger ones had to stay at the shallow end. On the other side of the river stood a Belarusian village, Pobrezie.  In the distance one could see a blacksmith’s shop.  The blacksmith’s wife Ancia made dresses for me and my younger sister and sometimes for Teresa.  In the opposite direction was located Bojarska, another Belarusian village.

On the farm my parents grew rye, wheat and potatoes.  There was a large orchard and a garden in which my mother grew tomatoes, cucumbers, pumpkins, lettuce, etc. In the summer people from both villages helped with the harvest and gathered potatoes.  Our unmarried Aunt Stasia visited us every winter to make, alter or mend our dresses.  Our farmhand Fiedor came from Bojarska but lived with us.  Our maid also came from Bojarska.

During threshing time our horse Siwek, my father’s beloved warhorse, pulled the horse-gear.  It was the same horse that pulled the sleigh to Niechniewicze when we were being deported to the Soviet Union.  Our dogs Burek and Bukiet ran after the sleigh.

Life on the farm was tough.  My parents worked from sunrise till dark but thanks to their efforts our life was improving.  My sister Janka attended boarding school in Iszczono.  My brother Heniek was finishing his school in Niechniewicze and next year was to go to a school in Nowogródek.

Our house had two entrances.  From one side there was a porch and that was the entrance for guests and visitors.  Here grew four lilac bushes, fragrant night-scented stock (maciejka), nasturtiums and sunflowers.  (When in 1965 our cousin J. Bienias went to what is now Belarus to locate our farm he found nothing.  The farm was completely destroyed.  He gathered a few flowers, dried them and sent them to my mother in England.)

The second entrance was from the farmyard and led into a large hallway from which steps led to the loft.  On the walls of the hall hung things needed on the farm.  Another door led to a very large kitchen, which was the centre of activity in the house.  Here we would take a bath in a round wooden washtub.  All the farm washing was done here in the same tub.  Cooking was a continuous process and we had all our meals here.  In the winter Fiedor slept in one corner.  On an overhang over the big stove slept our cats.

In the autumn Mother hired people to help with pickling cabbage and cucumbers and afterwards, large barrels of both were stored in the cellar.  In the summer sour milk was stored there as well.  In the loft we kept honey and slices of salted, very fat bacon in small barrels.  After a pig was slaughtered, sausages and hams were hung there.  Also white cheeses in the form of hearts were left to dry in the loft.

When the students came back from college to spend the holidays with their families, our school was used for dances.  Often through the window I saw my father with the coloured ribbons attached to his shoulders flying, leading a folk dance (oberek).  When my parents bought a gramophone I often heard “Tango Milonga” being played.  The priest and the policemen from Niechniewicze would come and after a few drinks would dance with the women teachers and the settlers’ wives.  Looking through the key-hole I saw the priest tuck up his cassock and dance.

The first car I saw caused great sorrow.  It was in 1937.  Mr. Niedenthal was driving to visit us.  Nearby our farmhand was ploughing the field.  The horse got frightened and ran into the plough cutting off its own leg.  This was a great loss.  The horse was beautiful and a thoroughbred.  Father had to shoot it.  It was the first time I saw tears in my father’s eyes.

On 17th September 1939, the Soviets invaded.  Initially we were left alone but they instructed us to leave everything as it was and not to sell anything.  Fiedor’s family from Bojarska came during the night and took our pig as payment.  They also took Fiedor with them.

The Belarusians started killing the settlers.  My father disappeared without a word.  The Soviets issued a warrant for his arrest.  The Belarusians would surround our house every night, shine lights through the windows and threaten my mother that they would burn the house down unless she told them where my father was.  This was very frightening.  My youngest sister was becoming hysterical but we really did not know where Father was.  After the war we found out that he had been hiding in a pile of potatoes.  He did not tell Mother because he was afraid that she would give him away if she got very frightened.  When Father realized that we would not be left alone, he went to Nowogródek during the night and gave himself up to the Soviets.  He was deported to the Republic of Komi and we were not harassed any longer.

Heniek started gathering wood from the forest for the winter.  We, the children, outgrew our clothing and winter was coming.  One night Skakurz, a Jew, came to see us.  He used to trade in everything and had great respect for my father.  He suggested that we should buy good quality warm clothing.  He bought potatoes and grain from us and took it away during the night.  From the proceeds Mother bought us the clothing we needed and this saved us later when in exile in Soviet Russia.

On the 10th February 1940 at daybreak we were woken up by Soviet soldiers.  They ordered us to pack for a journey to join our father.  Mother started crying and we with her.  Frightened and taken by surprise we did not know what to pack.  We collected our warm clothing while Mother stood paralysed, crying.  We also cried because we could not take our dolls with us.

When we were alone one of the soldiers said to my mother, “Take as much food as you can”.  He even packed hams and sausages in a sack for us.  Thanks to this we had something to eat in Russia but when Mother became ill and was taken to hospital in Wielska somebody stole everything.

The soldiers put everything into the sleigh, harnessed Siwek and told us to get in.  One soldier sat in the front, the other in the rear and we drove to Niechniewicze where all the settlers were gathered.  The soldiers were singing “Katiusza” all the way.  This was the first Russian song I ever heard.  For the last time we passed by our new school.  Mr. and Mrs. Gawronski, who managed the school, stood in front waving goodbye with tears in their eyes.  No Belarusians showed up, although so many had been friendly before.

From Niechniewicze we were taken to Baranowicze and from there we travelled far to a camp in Solosz in the Arkhangelsk district of Soviet Russia.

I dedicate this story to my mother who on her own in subhuman conditions, at the price of innumerable self-denials and sufferings, managed to save us all from death. 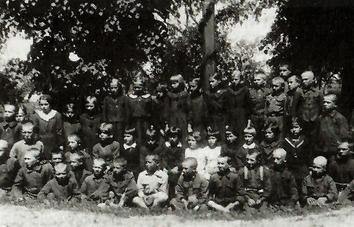 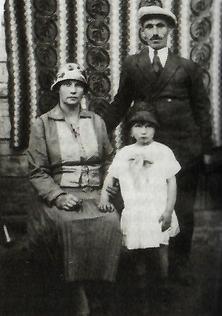 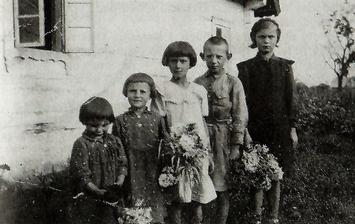