The date was 10 February 1940, the middle of a severe winter in north eastern Poland where I was born. My family: father, Adolf Miluk; mother, Anna Miluk (née Szpula); brothers, Alfons and Gustaf; sister, Nadzieja; and I, Helena, we were just sitting down to breakfast when there was a loud and urgent knock on the front door. I remember my father was so startled that he dropped the loaf of bread he was slicing. Following repeated, impatient loud knocks and shouts to open up, my father opened the front door when a group of Russian soldiers, with bayonets fixed to their rifles, burst in, ordered “arms up”, rounded us up and stood us against a wall with rifles pointing at us, and searched us for weapons. Yes, even me, a child of under five years of age. Other soldiers rushed through the house looking for hidden arms. By then, we were very frightened and crying uncontrollably; my father was as white as a sheet. News spread like wildfire through the village, and almost everybody gathered outside our house.

Not finding any arms, the soldiers then gave us a very short time to pack what we could, arrested the whole family, put us on their sleighs and took us to the nearest railway station. Villagers followed us a long way with everybody crying bitterly as we looked back and wondered whether we would ever see our village and house again. We never did. 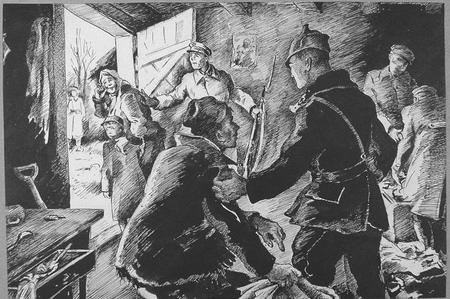 The NKVD arrest a family and take them to the railway station.