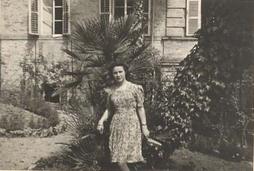 ​​Marriage and then back to school in Italy

When Jurek/Jerzy proposed, there was some confusion when my birth certificate was produced: I had added two years to my age to join the army. They asked Jurek, ”Which one do you want to marry? The younger one or the older one?”

So, after the end of the war, on 19 August 1945, I married 2nd Lt. Jerzy Gradosielski, sapper from 5th KDP, at the St George church in Porto San Giorgio, close to Loreto. Jurek's unit had arranged for our wedding reception in the garden of a palace, and the tables and chairs were placed on a Bailey bridge (the sappers/engineers built these during the war). We had a wonderful honeymoon in Venice and Lake Como.


In October of that year, I was transferred from the 316 Transport Company to the Army Grammar School in Porto San Giorgio. I was happy to be back at school, but we had to study intensely during a very short time, to make up for what we had missed during the war years.

The first years in England
Soon after, all the army schools in Italy were transported on the luxury liner Empress of Australia from Naples to Great Britain. We landed in Liverpool on 18 August 1946 and the Porto San Giorgio School was now housed in the PKPR camp in Foxley near Hereford. The several hundred refugees at the camp were housed in one-storey barracks and here they had to learn a new language and new customs, learn a trade and earn a living, to build and support a family. One of the barracks was converted into a social club for film/theatre, dances and social drinking.

Another was turned into a Catholic chapel, which even had a copy of the icon known as the "Black Madonna of Czestochowa". Now in peacetime we could resume our Catholic traditions: Holy Mass and processions, weddings and baptisms. First Holy Communion was especially important. Here we met old friends from Poland and others we had met during the war years. Here I learnt English and completed my secondary education.

In May 1947, I joined my husband at the Hermitage Camp near Newbury. He had been learning English and had trained as an electrical technician.

For Easter 1947 we travelled up to Edinburgh, Scotland (where my father was stationed) so that I could introduce my new husband to my parents. We also visited Wojtek, the soldier bear, at the Zoo. I had seen him before in Palestine when he was living the life of a soldier. I remember that he had happy eyes. Now, unfortunately, he was separated by two grids; he was far away from us. I called out “Wojtek!” He went to the first grid, I started speaking Polish to him, I saw that he had sad eyes! I knew what Wojtek wanted - a cigarette and some beer, which he used to share with the soldiers. I had nothing for him. Poor Wojtek, confined to a cage after the life of freedom he had enjoyed during the war, even helping out by carrying ammunition destined for the Battle of Monte Casino. We left, feeling very dejected.


Polonia in London, UK
When we came here in 1949, there was a large Polish community in East London. Gradually it increased, mostly ex-servicemen who feared persecution if they returned to Poland. There were enough families to be able to organise social activities, centered around the Catholic Church. As our children grew older, we felt that we needed a Polish school to teach our children the Polish language and culture, so my husband founded the Saturday morning school in 1956, where I taught for a while. Many children went on to take their GCE “O” levels and even “A” levels in Polish.

In 1976, we girls from the 316 Transport Company started a group called “Zespol 316”; we performed songs and sketches describing our experiences during the war and after. We toured for many years all over the UK, even to the USA and Canada.


I have participated in all kinds of Polish social and charity organisations over the years, as well as various veteran groups, such as the SPK (Polish Combatants' Association). I was even a member of the Polish Government-in-Exile for several years. I have contributed many articles to Polish newspapers, books and newsletters. I worked for the British Refugee Council in 1989 and, when a new generation arrived from Poland, asylum–seekers, I worked for over ten years as an interpreter/translator for the Local Council.

In between all these activities, I also managed to bring up six children!

My husband Jurek died in July 1989 - sadly never seeing a free Poland. You can read his storyhere.

I have visited our osada, now in Ukraine, twice with my brother and other family members. Our house is still standing; all the other houses and the church were destroyed soon after deportation. New houses are now being built on the land.

As a member of SPK, I have represented women soldiers on several commemorative trips to Poland, Italy and Iran.


It is usually the male soldiers who get the honour and the glory, so I was pleased to be featured in an exhibition in Bologna, Italy in 2012 about Polish women drivers during the war.

​I have been a member of the Conservative Party for many years and stood as a candidate for the local council in West Ham on four occasions (although I was never elected).

It was very pleasant reading in the beautiful garden in the warm sunshine. I loved literature and, having done a lot of reading in Siberia, I found the lessons fairly easy. At the time of deportation, the older children had come directly from school, so they had had their books with them. These were shared and passed around; I read my favourites several times over. In July 1946, I received my certificate and was promoted to the IV class.

The newly-weds, Danuta and Jerzy Gradosielski 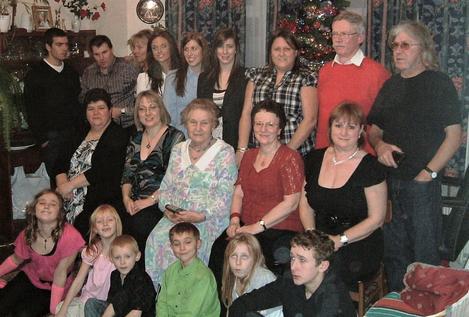 Over the years, many friends have moved out of London but I still live in Forest Gate.

We even had chickens in the garden 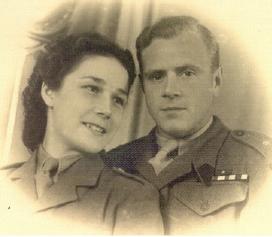 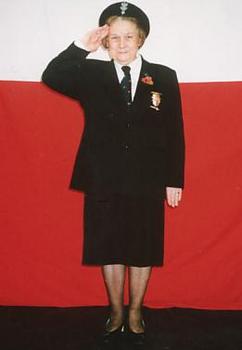 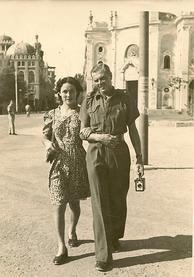 Our first daughter, Elizabeth, was born in June 1948 in the Polish military hospital in Penley near Wrexham, Wales.

In April 1949, we moved to London where Jurek started work. When I left the army, I had been given £25 to buy civilian clothes, but Jurek used the money to buy a radio! I was so angry, but it turned out well, because I used to listen to a daily programme, “Mrs Dale's Diary” and learnt all about shopping, English measures and money, etc. That’s how I learnt English! I managed to buy a cot for the baby and a second-hand sewing machine so I made some outfits for myself.

Jurek and Danuta with their six children 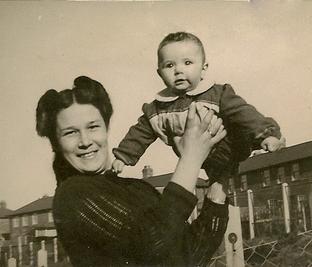 Religious and national holidays were celebrated with stage performances by the children reciting poetry, singing folk songs and dancing in national costumes. Nativity plays at Christmas were popular, as well as the Polish Father Christmas, dressed as St Nicholas, who came with gifts. Choirs and dance groups were formed by the young people, who gave performances at various occasions.

While working in east London, Jurek bought a house, without even going inside. It turned out that there was no electricity (only gas), no hot water, no bathroom, and an outside toilet! But he soon rewired and renovated the whole house.

We lived there for ten years but, with three children, it became too small. We found a very large house close by which was in very bad condition so the price was not high. I persuaded the bank that, if we rented out the rooms on the top floor, we could make it work. We did, eventually, after a lot of hard work. 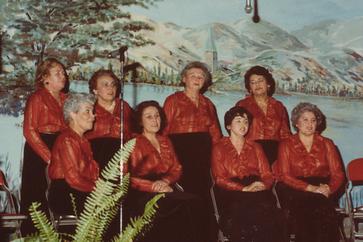 We were also involved in the Scout movement. My husband was a keen sailor from his youth in Poland; he organised yachting competitions and holidays in the 1950s called “Polesie”, in the Norfolk Broads (a lake area on the east coast of England).