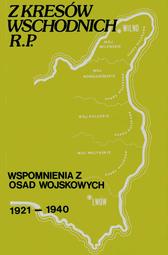 Osada Krechowiecka took its name from the 1st Krechowiecki Uhlan (Lancers) Regiment, whose 85 ex-soldiers arrived 5 April 1921 in the area of Wołyń to receive plots of land on the estate of Szubków-Karlowszczyzna near the river Horyn and they became known as Military Settlers.

My father Stefan Maczka born 27 October 1895 served as a volunteer in the 1st Krechowiecki Uhlan Regiment from 1918 to 1921. From the allocation of plots of land to settlers by a draw, father received plot No. 22 of about 13ha, including 2ha. of hay meadow and a small part of the forest. The land was located at the crossroads of Równe-Tuczyn and Kozlin-Horyngród. Our nearest neighbours were: Wincenty Cala - on the other side of the road to Kozlin, W. Gorzkowski opposite us on the other side of Równe-Tuczyn road, Szczepan Balmas on the north side, and Karlowsczyzna in the east, where in 1936 the settlers built a church and presbytery neighbouring our plot of land.

At first, father lived in a dug-out under the big pine tree (when we were small he often talked about it and showed us the tree, but at the time there were beehives and a carp pond located near the tree.) With the help of his friends, my father built the first house on his plot.

He married Stanislawa Poznanska from the nearby town of Tuczyn. But she died 23 January 1928 orphaning the three children: Stefan Boguslaw born 31 December 1922, Danuta Alexandra (that's me) born 21 March 1925 and Zofia born 1 August 1926. Father re-married on 5 May 1931 Helena Slusarczyk in Krakow. Right away she joined the Village Housewives Association to carry out social work at the Osada.

After 18 years of hard and difficult pioneering work, Osada Krechowiecka achieved great success. Improvements were magnificent, all thanks to the joint efforts and hard work of all the settlers. Whilst working for the common cause, the settlers had to take care of their own plots of land to provide bread for the family and gradually to increase prosperity. As I remember, our first house had a few rooms, a larder and an oven for baking bread. Our wooden house, with a roof covered by thatch, had walls which were painted white with lime each year. An extension to the house accommodated a stable for horses, cowshed and pigsty. Hay for the horses was stored in the loft over the stable. In the loft over the house were clotheslines for drying washing during the winter. We liked to play hide and seek in the loft with the neighbouring children.

In the farm compound there was an enclosure for cattle and hutches for Chinchilla rabbits, a shed for drying tobacco and large wooden thatched barn. On the roof of the barn was a stork's nest. Chickens, ducks and turkeys had free run in the compound, also the sheep (karakuly) but all were locked in the stables for the night. The farm compound and buildings were guarded by the dog, let loose during the night, but during the day he ran with his lead attached to a wire, stretching over the full length of the farmyard. There was a small dog and cats for the children to play with; they were pampered and spoiled by us. The farmyard was surrounded by a fence with a large entrance gate leading to the main road and with another rear gate leading to the field. A small gate led to the garden with a path through to the orchard and to a fish pond and to the apiary (beehives). Behind the house there were cherry trees. The lane leading from the main road to our yard was lined with the cherry trees. The ditch ran the full length of our land, separating it from the main road; the water ran to the stream running along our hay meadow.

Besides grain, hay, lucerne and clover, father planted potatoes, sugar beets and later on tobacco. Father delivered tobacco to the state tobacco factory in Równe and the sugar beet to the sugar factory in Babin.

The orchard covered a large part of our land. I remember father taking fruit from our farm to the Wołyń Market and Exhibition in Równe 16 km away. At Wołyń Market he won a prize for apples. Father looked after the orchard himself.

In 1937 we moved to our new house, built from red bricks and the roof covered with zinc sheets, located a little apart from the other farm buildings.

We now had a large kitchen, with a large oven for baking bread and pastry and a large range cooker with a small oven. There were three bedrooms, a large sitting-room with a door to the veranda. Each tiled fire-place heated two rooms. There was also a bathroom with a big wooden bath. Up the stairs to the attic was a room for me and my sister, with a door to the balcony. All the windows in the house (doubled in the winter) had shutters. Around the house were lovely flowers and ornamental bushes, further on a vegetable garden, with raspberries, strawberries, currants and gooseberries, from which mother made jams and preserves for the winter. Under the house were two cellars; one for the fruit and preserves, and a larger one for potatoes, vegetables, sour cabbage, pickled gherkins etc. Large quantities of potatoes were stored outside in the pit covered with straw topped with soil to provide protection from the frost. In the larder were smoked sausages, hams and marinated meat, salted lard in barrels, sacks of buckwheat, flour and sugar. Those were our normal reserves of food stored for the winter. Settlers delivered milk to the communal dairy, from which they received butter for their own use and skimmed milk, mainly used to feed the pigs. For the farm work, we had three permanent workers, who lived in our old house. For the seasonal work in the fields, we hired temporary workers from nearby villages.

Father like all other settlers, had to carry out various work duties, particularly during the building of the village Hall school and the church. He was also a member of the Osada's Central Committee. Father was elected „Soltys”[1] for about 5 years and was the last Chairman of the Osada. All the settlers had to perform a certain amount of work for the municipality called "szarwarki"[2].

At the Osada there was a school with seven classes, totalling 250 children. When the time came to start Grammar School (Gimnazjum) or one of the commercial or trade schools, students had to travel to Równe or to other towns. My brother was accepted at the State Grammar School in Równe. Later on, by joint efforts of all the settlers in Wołyń, they built a Settlers’ Gimnazjum with "Bursa" (the hall of residence for students) in Równe. To enrol at trade schools some students had to travel far to Poznan or other towns. In 1939 just when the schools were due to start lessons, World War II erupted. For many children it was an interruption, or the end of schooling in Poland. Some children remained at schools until deportation to Siberia.

With the eruption of war, sadness and despondency arrived. Settlers didn't know what to do; one group volunteered to join the army, they wanted to defend their own country, but were told: "you are too old, remain on your farms and wait for instructions". The instructions never came.

On 17 September 1939 to the great surprise of all the settlers, the Red Army crossed the Polish Eastern borders. There was no information, no instructions, nobody could offer any advice. Some of the settlers crossed the "green border" to central Poland occupied by the Germans, where they had relatives. They planned to return for their own families, but not all of them succeeded. After the entry of the Red Army, the Ukrainian Committee immediately started governing with instructions from the top. One of the first decisions was to order the more successful settlers to vacate their farms within a few days without resistance. They arrived at our osada in October, ordering us to leave within the next few days; we were allowed to take only personal possessions, bedding and a few items of furniture.

The majority of the settlers remained on the Osada until the 10 February 1940. We took up accommodation in the nearby town of Tuczyn in the house of a friendly Jew. Our servants remained on the farm and a few days later during the night they delivered to us (as previously promised) supplies of food from our cellar. This was very useful when unexpectedly we were forcibly deported to Siberia on Saturday morning of 10th of February 1940. The Soviets deported us to the Kotlas district of Siberia, where my younger sister Zofia died on 24 December (Christmas Eve) 1940.

P.S. My father died in London aged 79. Helena Maczka now 86 is permanently in Hospital. Brother Stefan Boguslaw is living in Essex. Tadeusz Maczka (adopted brother) is living in Canada and I live in London. (As of 1992)


[1] the elected chief village official/administrator
[2] a form of a local tax, entailing a certain number of days work with a horse, mostly transporting materials.