Klemens Grzybowski was born 23 November 1895 in Biała Cerkiew, Russia, son of Michał and Aniela Adamowicz. In December 1914, at barely 19, he volunteered to join the Russian-Polish Corp as an apprentice ironworker. He left his home never to return to his family in Biała Cerkiew.

Poland had lost its sovereignty at the end of the 18th century to three neighbouring powers: Russia, Prussia and Austria.
From 1914 to 1918, Klemens Grzybowski fought on various fronts in different battles. Klemens’ intention was to fight for a Polish independent state. His ambition was to join a cavalry regiment. In 1917, he managed to join the newly formed 1st Polish Lancers, one of several units making up the1st Polish Corps of the Russian Army where he enjoyed life. He became highly skilled both in battle and in the field.

In 1918 Poland regained its sovereignty. Two years later in 1920 the country had to fight again for its independence against its eastern neighbour, communist Bolshevik Russia whose ambition was to spread communism throughout Europe. After the crucial battle of Warsaw known as the 20th most important battle of the world, the Red Army signed an armistice in 1921 at Riga and Poland’s eastern border and Europe was secured.

On 17 December 1920 the Polish Diet (Sejm) passed the law endowing soldiers of merit with land in the country’s Eastern Borderlands, called Kresy. Klemens Grzybowski accepted the endowment and retired to his 30 acres in Wołyn, Eastern Poland. With him, 95 other lancers from the same regiment retired to the settlement which was named after the regiment - Osada Krechowiecka [More about life on the settlement and the family is available by clicking this link].  This is the story of hardened soldiers who became amateur farmers, most of them highly decorated: with Virtuti Militari, Cross of Merit for Bravery, Cross of Valour, Cross of Independence.

In the Second World War, Klemens Grzybowski served as a mechanic in the all-female 317 Transport Company of the Polish 2nd Corps in Iraq, Palestine, Egypt and Italy.

He died on 31 March 1957 in Blackburn, Lancashire, England, without military honours or escort.

Back to Contents page​

Go to Next page - Rysiek Grzybowski 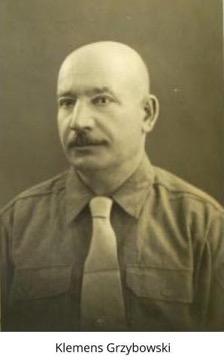 On 24 July 1917, the 1st Polish Lancers Regiment fought a famous battle at Krechowce near Stanisławów eastern Poland against Prussian and Austrian armies. This battle was won by the Polish Lancers, a force of 400 which checked the advance of 2,000 German troops and protected the retreat of the Russian 11th Infantry Division threatened by encirclement. This was reported in the international press across Europe for its magnificence. The battle brought fame and admiration, with a high number of decorations. Klemens was awarded the Cross of St. George class 4 for gallantry, a high military award in the Czarist (Russian) Army.

After this famous victory at Krechowce the regiment was re-named 1st Krechowiecki Lancers Regiment and was known as the finest regiment of the Polish cavalry 1914-1920. Klemens was decorated with the prestigious Polish military award: Virtuti Military Cross No.2565, Cross of Independence and Cross of Bravery three times.