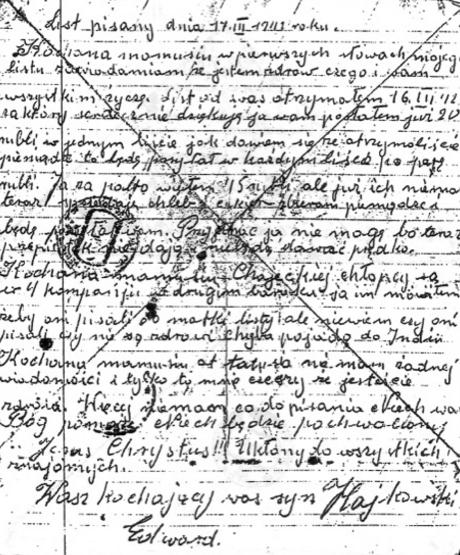 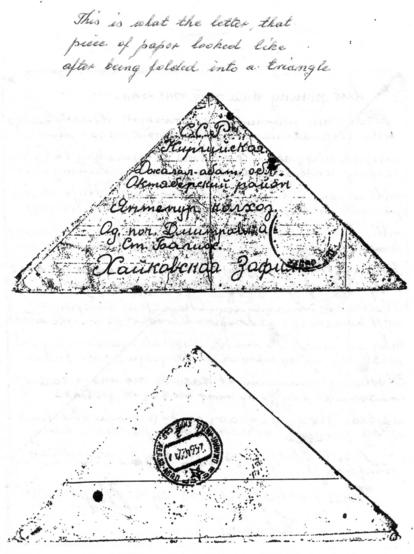 Vrevskoje was one of several camps that were gathering or enlisting points for all those wishing to join the newly formed Polish Army under the command of General Władysław Anders. It was a big camp consisting of tents and mud huts, and I with a few other lads found ourselves in one of the huts.

Every day more men and boys arrived at the camp, most looked more like shadows covered in tatters, very hungry and some could hardly walk, but we were all, if I can use the expression, volunteers. Every day, sometimes two or three times a day we used to take those who passed away to the nearby cemetery. There were no coffins, bodies were just wrapped in blankets and driven away by horse and cart. How many were buried there nobody knows.

We had no washing facilities except for some cold water taps, and as for the toilets, there was a deep trench with a few boards across and a piece of hessian around. Once again lice were everywhere and one day we were taken to a makeshift delousing place. We started having injections against all sorts of infections. One day we were issued with brand new uniforms; battledress, forage caps, boots and socks. Some uniforms were a little too big, but we looked more like soldiers.

About three weeks after arriving at Vrevskoje I met a man whose name was Staniszewski. Our families had travelled together from Siberia. He told me that a few days after I joined the boy-soldiers in Arys, their wagon was moved to the town of Dzhalal-Abad in Kyrgyzstan. From there they were driven by horse and cart to a village and put into mud huts, just gaping holes, not even a bit of straw for the floor; only a dirt floor to sleep on.

He and my father left the village after a while and went looking for the Polish army outpost to get some help. On the way my father became ill so he [Staniszewski] left my dad in a village and asked people to look after him, and carried on his own. There was a Polish army camp in the Dzhalal-Abad area and he found it, and gave them all the details. After a while he was transferred to Vrovskoje.

He gave me the address of the village where my family was and said “Write to your mother”, then he walked away. I managed to get a piece of paper which was only a page from a school exercise book, and I wrote a few lines including my address, folded it into a triangle (there were no envelopes) and posted it.

My sister was telling me not long ago that one day while they were in the village in Kyrgyzstan a complete stranger brought a note from my dad written on a piece of brown packing paper. In it, he said that he had been ill, but that he was feeling better and would continue to look for the army and try to get some help.

About ten or so days later, I received a letter, a little piece of paper folded into a triangle from my mother. I cried like a baby when I was reading it, because mum was asking for help. She wrote that three of them were very ill, that they were starving, and that to stay alive they were gathering stinging nettles and a plant called orach [Ed. note: used much like spinach], from which they made some kind of soup and that was about all they were existing on. Mum asked me to send her some money if I had any.

I did have some money because I sold my old boots and a jacket to the natives for about sixty-five roubles. I wrote a little note, put twenty roubles with it, folded it all into a triangle and posted it hoping that she would get it. Sometime later I had a note from my mum saying that she had received the money so the same day I sent a few more roubles to her, and a few days later I sent another letter with some money in it. When my money ran out I used to sell my bread ration to one of the natives and sent the money to my family. I still have one letter that I sent to my mother in March 1942. My sister has kept it all those years and she gave it back to me. A copy of the letter is included with this story.

Letter dated 17 March 1942
Beloved mummy, the first words in my letter are to say that I am well which I wish for all of you.  I received your letter 16 March 1942 for which I sincerely thank you.  I have sent you 20 roubles in one letter and when I hear that you received the money then in each letter I will send a few roubles. I sold my coat for 15 roubles but no longer have them now they are selling bread and sweets. I am making money and will send it to you. I cannot visit you because they are not giving out passes. They won’t be giving them out soon.
Dearest mummy, Mrs Chojecka’s sons are in a company in another barrack. I told them to write letters to their mother but I don’t know whether they wrote or not. They are not well, probably they’ll go to India.
Dearest mummy, I have not had news from Daddy and the only thing to please me is that you are well.  I have nothing more to write. May God help you. Praise be to Jesus Christ.  My regards to all our friends.
Your loving son,
Edward


Around 20 March, General Anders and a Russian general arrived at the camp, and after making short speeches we were told that we would soon be leaving Vrevskoje. If I remember correctly it was the 21 or 22 March when we boarded a passenger train and departed from Vrevskoje.

It was a very long journey and with short stops it lasted about three days. I do not remember many towns that we went through, but two that I can still see in my mind were Tashkent and Samarkand. Early on the morning 25 March 1942, the train stopped in a little place just outside the port of Krasnovodsk [Ed. note: now Turkmenbashi] on the Caspian Sea, and we had to walk the rest of the way to the port. When we got to the port we were ushered onto a ship which was a freighter, or an oil tanker. It was filthy and we were all on the deck together – hundreds of Polish soldiers just standing in little groups and talking. Nobody was quite sure where we were going.

or Back to Contents Page​​