The Polish Forces were spread out from the United Kingdom, Egypt, Iran, Iraq and Palestine. The civilians were evacuated from Pahlevi to Tehran, from where they were generally sent to India and Africa. The Army was moved to Iraq (the region of Baghdad and Mosul) where the 2nd Corps was organised. The remainder were to form the 3rd Corps in Palestine and Egypt. At the same time, reinforcements were sent to the UK for the Polish Army, Navy and Air Force.

In August 1942, the first order regulating the organisation of the Polish Women’s Auxiliary Service(PWSK) was issued. It stated that the women volunteers were soldiers on active service, their task being to fill posts vacated by male soldiers. It regulated the disciplinary authority of the commandments, ranks and badges, and set up the PSK Depot Centre.

Just prior to this, in June 1942, the Ministry of National Defence, in conjunction with the Executive Council of the Polish Red Cross, issued a Provisional Organisational Order concerning the Military Nursing Service (WKSSłZ – Wojskowy Korpus Sióstr Służby Zdrowia). It was not until May 1944 that the WKSSłZ was finally formed and all sisters of the Polish Red Cross were conscripted into it. The Inspectorate of Medical Services was removed from the PSK Inspectorate and attached to the Ministry of National Defence’s Inspectorate of Medical Services. Jadwiga Żylińska was appointed Senior Staff Sister of the Military Nursing Service (Polish Army in the Middle East). In Great Britain, Maria Mochnacka was appointed Senior Staff Sister at the Headquarters of the Army Medical Service (July 1944).

The organisation in the Military Hospital medical companies (doctors, pharmacists, nurses, laboratory staff) was subordinated to the Inspector of the PSK Bronisława Wysłouchowa, through the company commandants.

Before departure for Italy in December 1943, all sisters of the WKSSłZ (all holding commissions) received passes from the International Red Cross.

A PSK Battalion (three companies in civilian camps) was organised in Tehran, through which some 2,000 women passed for training in Iraq and Palestine.

Some 800 PSK were trained as drivers and a further 65 as welfare personnel in Palestine.  A network of women’s elementary training schools was established, along with three six-week long courses for officers and candidates for officers as well as one-month long courses for NCOs. Simultaneously, two-month long signal courses were established in Iraq and one-month long courses at the Army Training Centre for catering officers. Nurses were trained at special courses held in the Polish Red Cross hospitals in Tehran.

Between the Autumn of 1942 and Autumn of 1943, four Polish General Hospitals were established (numbers 1-4), as were two Casualty Clearing Stations (CCS) and a Convalescent Home.

In July 1943, the 4th General Hospital was transferred to the UK to augment the Polish field hospitals already there.

The working conditions of the field hospital staff in the Iraqi desert were very difficult. In place of the typhoid and dysentery epidemics appeared malaria as well as other tropical diseases.

The departure of the 2nd Corps to the European continent led to the division of the PSK (Middle East) into two groups:

Already in the first days of the war in September 1939, the well-loved “Wesoła Lwowska Fala” (The Happy Lwów Air Wave) known throughout pre-war Poland for its satirical and comic entertainment radio programme, began patriotic broadcasts in response to the aggressive anti-Polish propaganda broadcast by the German radio in Breslau (Wroclaw).

As a result of the mobilisation orders received, it left Lwów, to begin entertaining troops in the field. Following the Soviet invasion of Poland on the 17 September 1939, the Lwowska Fala crossed to Romania. There, it immediately began to entertain the interned Polish troops and civilian refugees. Its work was not only confined to entertaining. During their tours of the internment camps, they took letters from the soldiers for posting to their families in occupied Poland, and helped to smuggle out specialists from the camps, facilitating their escape to the Polish Army in France.

In March 1940, the Lwowska Fala was ordered to France by the Polish General Staff and was renamed the 1st Advanced Echelon Polish Army Theatre. It was soon touring the various Polish army camps playing to the troops. Following the collapse of France, it was evacuated to the UK. After landing in Liverpool, it was sent to Scotland and attached to the 10th Polish Armoured Division under General Stanisław Maczek. The theatre continued its morale-boosting work, entertaining the troops wherever they were – for the army, on airfields, for the sailors, even on submarines, for the airborne troops and in London for the civilians, often performing during air raids. It also participated in special programmes for the Allies.

In the Summer of 1944, the Army Theatre left for the Continent in the wake of the 1st Armoured Division, playing for the frontline troops in Belgium and Holland.

After three months, it had entertained forces in France before returning to Scotland where it was disbanded in 1946. Amongst the players were two well-known actresses who were serving soldiers in the PWSK.

Continued on Page 4 : The PSK in Great Britain
Back to Introduction Page 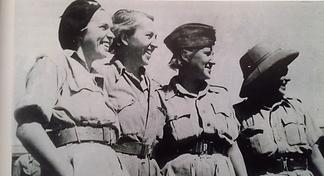 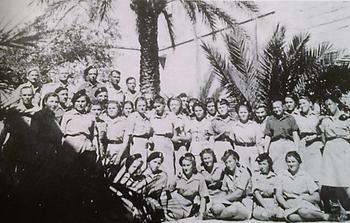 with members of the "Lwowska Fala".

PWSK volunteers on a driving course. 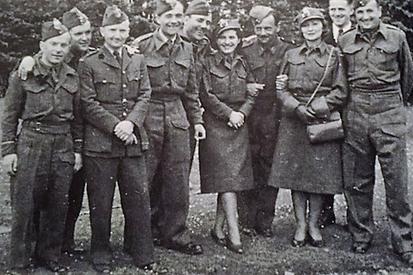 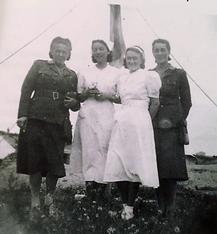 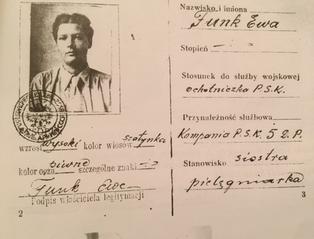 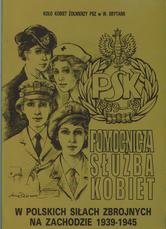 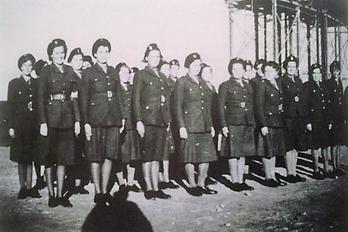 PWSK nurses on their way to work. 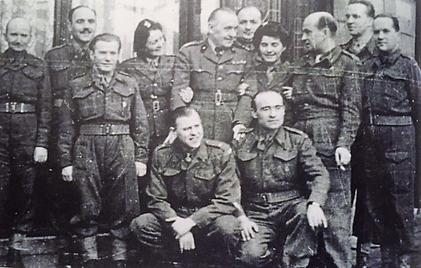 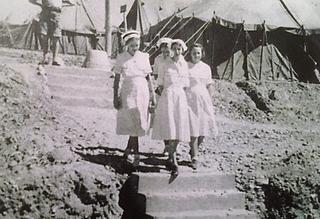 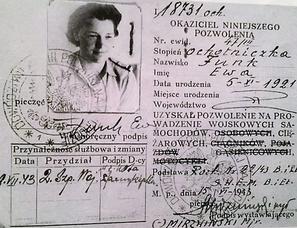