The PSK in Great Britain

The organisation of the PSK in Great Britain began much later than in the USSR. The main reason for this was the lack of human resources. Only because of the arrival of the PSK personnel from the Middle East to the UK during 1942-1944, the formation of the PSK became feasible. For this reason, the organisational orders issued by the Supreme GHQ Polish Armed Forces in London post-dated those issued by local commanders in the USSR and the Middle East.

The first order issued by the Ministry of National Defence about the “Voluntary enrolment of women to the PSK in the Polish Armed Forces” appeared in December 1942, over a year after the PSK had been organised and working in the USSR.

Between the formulation of the role of women volunteers in the Middle East as soldiers in December 1942 and the definition drawn up by the Ministry of National Defence defining the volunteers as members of the PSK organisation, there existed a temporary, though important difference, removed only in July 1944. In that month, the Minister of National Defence reorganised the PSK for the duration of its existence outside Poland and cancelled all previous conflicting orders.

The main changes brought in by the order were:

At the head of each, stood a commandant.

Commandant-in-Chief PWSK who was directly subordinated to the Minister of National Defence.

A further important change brought in by the order was the introduction of officer and NCO ranks for the PSK in line with those used in the Polish Army. The correlation of rank and function was abolished and the disciplinary prerogatives of the commandants were regulated.

In short, by the end of July 1944, the whole of the PSK regulations were consolidated and unified.

The basic PSK organisational unit in the UK was the camp in Scotland, composed of the training, depot and transit platoons. Also, all PWSK personnel in the UK was registered through the PWSK camp. It took all PWSK transports coming to Britain.

Elementary universal military training was undertaken at the camps. A PWSK officers’ course was established in North Berwick at the Infantry and Motorised Cavalry Officers’ School.

General Military Hospitals Nos. 1, 2, 4 and 11, all based in Scotland, had a PWSK company each. PWSK personnel manned various posts at GHQ 1 Corps, the General Staff and PWSK Chief Inspectorate. In the army units, they worked as canteen staff, telephonists, typists and welfare personnel.

The 3rd PWSK Company serviced the Armoured Forces and Electrical Mechanical Engineers’ Training Centre (Catterick Camp) in 1945 as far as transport, entertainment and administration were concerned.

With the departure of the 1st Armoured Division for the Continent in July 1944, there was a partial re-organisation of the PWSK in the UK. The 1st PWSK Battalion was formed in Scotland, whilst the camp at North Berwick was transformed into a practical training centre in preparation for civilian life.

From September 1944, a Field Group was attached to the 1st Armoured Division in North West Europe, encompassing mobile canteens, partially-serviced by PWSK personnel.

Continued on Page 5 : The PWSK in Italy - the 2nd Polish Corps
Back to Introduction Page 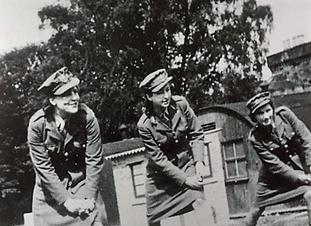 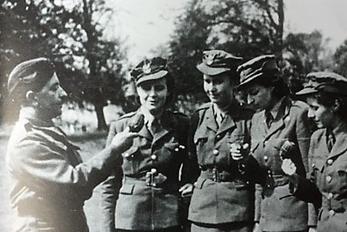 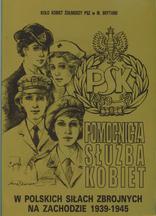