Yes for me Pahlevi was like a fairy tale which lasted until October when we left for Teheran. This journey took us through the most beautiful scenery sparkling with greenery, flowers, vineyards and rice fields with the tree covered slopes of the mountains of Elburs forming the horizon. After an hour or two the scenery changed as we wound between high mountains over deep ravines with less and less vegetation, and a wilderness of bare rocks. At last we came down to an almost uninhabited sandy plateau, through Kazvin to Teheran itself. 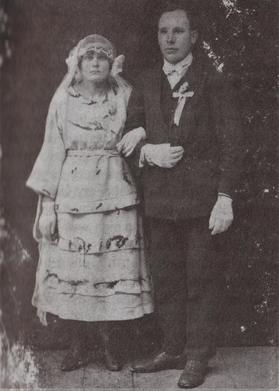 The wedding of  Batorówka settlers Antoni Godawa and Franciszka Głowacka - 24.2.1924

Wanda Godawa-Szwender (on left) with her father in Pahlevi, August 1942

My father having served under General Haller received 12 hectares. In 1924 he married Franciszka the sister of Marian Głowacki. I was the eldest of their four children, born in 1926 to be followed at roughly two-year intervals by Helena, Edward and Bolesław. Since the school in the osada only took children up to form 4, from that time I went to school in Beresteczko where I boarded with the Sisters of Nazareth. Just before the war a 7-form school was opened in the small town of Łobaczówka so I was transferred there in form 6. At about the same time a new church was built there but prior to that we worshipped in Beresteczko, 18 km away.

For information about the experiences of the Barut family, also from osada Batorówka,

read the accounts written by Jadwiga Kapszewicz (Barut), and her brother, Kazimierz Barut. 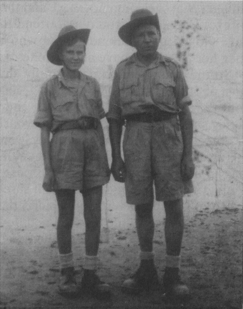 ​​Our osada Batorówka consisted of 12 settlers: - J Kotula, P Barut, W Maciejczyk, M Opioła, S Urban, W Bernaś, J Reszczyński, S Dymiński, J Skrabski, S Ch. Chorwat, my father A Godawa and my uncle M Głowacki (whose entire family was annihilated in the Soviet Union); was situated about half-way between Horóchow and Beresteczko some 4 km from the neighbouring osada of Łobaczówka which was made up of a further 24 military settlers.

​All this was destroyed with the outbreak of war in 1939 as hordes of Bolsheviks overran the Borderlands. Then came that fatal date of 10 February 1940 which I shall remember to my dying day. All our settlers were herded onto trucks at Haliczany station and transported into Soviet territory. A similar fate befalling almost 2 million Poles.

After three weeks of this punishing journey our train drew up at Kotłas in county Archangelsk. Then we were taken along the frozen river Vychegda to posiolek Charitonowo where my father was put to work either as a forester or as a logger on the river. As a means of eking out our pitiful supplies, we children gathered wild berries and mushrooms from the forest in the autumn. In September of 1940 I was in class 6 while my young brothers and sister were in the lower classes of the all-age Soviet system school.

We became resigned to this impoverished existence believing it would never end, when out of the blue came the hopeful news to us forgotten in the forests of the far north, that Germany had attacked her Soviet ally on 22 June 1941, causing a new agreement to be signed between the Polish Government in Exile in London and Stalin. This was followed by the proclamation of an amnesty for all Poles in Soviet hands, at least in theory, but ignored in fact for thousands of Poles secreted in the huge vastness of the Soviet Union. But in our posiolek there was terrific excitement as preparations to move south gained pace, believing, as we did that a Polish army was to be formed with every possibility of serving abroad.

We actually left the posiolek on the 14 October aboard a small steamer by which we returned to Kotłas. The place was awash with Polish families, all hungry, huddling in rugs because of the cold and, like us, anxious to board any train travelling south. This was yet another appalling journey in overcrowded trucks where we suffered from hunger, the cold and the ever-present lice. Towards the end of October we reached Tashkent and then the ‘Engels’ collective farm in Kagan in the Kamasha district. Though we didn’t stay here long, we lived in mud huts which had neither doors nor windows and we tried to keep out the cold by lighting fires with brushwood. The whole procedure was bedevilled by the smoke which kept us from sleeping, indeed almost from breathing. There our outdoor work was harvesting cotton but, as I say, we were moved on to another collective farm called ‘The First of May’. There all the Polish women – my mother and younger sister included – again went out to the cotton fields, while my father slaved away in the stables. The pay for our labour was a handful of flour from which mother concocted pancakes.

In this way it became Christmas 1941 - poverty-stricken festivities, during a cruelly cold winter, still lacking fuel and warm clothes but riddled with hunger. Matters steadily worsened so that we were forced to rake through the nearby fields searching for frozen carrots, turnips and potatoes. Then a typhoid epidemic erupted.

About this time stories began seeping through that in faraway Vrevskoye, some 150 km distance, a Polish army was being formed for which boys and girls were being recruited into the Cadets. At this mother plucked up all her courage and together we trudged by foot all the way to Tashkent and from there, by train, went on to Vrevskoye. My brothers enlisted into the boys’ division and my sister and I into the girls’ Cadet Corps. Then mother retraced her steps to the farm and father.

Easter, 5 April 1942, was one of the best days I can remember of that period. Crowds of praying and tearful people thanked God for their miraculous salvation and in the square the army had set up a loaded Easter table. After two years of constant deprivation, it all seemed like a fairy story.

Unfortunately our happiness was short lived, for my elder brother, Edzio, died of dysentery on 15 May. Then all the girl cadets, including my sister Helena and I, were despatched to Guzar and on from there to the collective farm in Karkin Batash where there was a main Cadet school (Szkola Junacka) and also a few Polish orphanages. Conditions were terrible in the half-ruinous Uzbek huts in which we were housed. Besides there being a lack of food and water, the heat was unbearable. We were divided up into groups and began regular classes and exercise. I was now in the first class of the grammar school curriculum, but heat and constant bouts of illness made learning difficult.

Then came happier news – for the Polish military chaplain Bishop Gawlina arrived and confirmed all of us on 18 June. Yet dysentery and typhoid regularly swept through the camp causing my sister Hela’s death on 13 June 1942. She was just 14 years old. Bishop Gawlina appealed to the commanding authorities to evacuate all the children from what he called ‘This Valley of Death’. It involved some girls being moved to Kitab while others, including myself at that time exhausted with attacks of both dysentery and hepatitis, were moved to Guzar. All of us impatiently awaited the arrival of General Anders who had promised to visit our camp. It was he who turned out to be our saviour for he arranged for us to be taken from this Land of Bondage. It all started on 11 August when we left Guzar. By 14 August we were in Krasnovodsk and on 16 August boarded ships for the two-day journey to Pahlevi in Persia where we arrived just about at the end of our tether.

Two years of living in the dreadful destitution imposed by the Soviet regime had certainly not prepared us for the overwhelming sight of shops full of goods and straightforward cleanliness ….. We spent our time sea-bathing and exercising, rejoicing in the fresh sea air and the good food which included a plentiful supply of different fruits which helped our physical well-being. But even then, some whose health had been over-taxed gave up the ghost and remained in that place forever.

​I left Cadet School at the end of October and went to Camp No 3 to join my mother and brother. Father left with the army first for Khanakin and then Egypt. The winter of 1942/43 was taken up with school and girl-guides, and I ended my first grammar school year on 1 April. I must stress that Camp No 3 was in a beautiful situation completely surrounded by greenery. For example, our classrooms were under huge trees dotted around a swimming pool. This idyllic life was only spoiled by the ghastly news of the death of General Sikorski in Gibraltar on 4 June 1943.

With much regret we left our beautiful camp in Teheran by train on 21 August 1943. Again we went up via the high mountains, this time in a heatwave and through the 130 tunnels to another transit camp in Ahvaz where I continued my education in the 2nd form of grammar school.

Then a new order of departure was published and on 1 December we were shipped by M.S. Batory, which after six days sailing arrived in Karachi, India. Here our transit camp was surrounded by barbed wire, but we lived in an airy tent as the days were hot and at nights hyenas constantly howled beyond the wire.

The year I spent here was filled with education and excursions organised by the girl-guides. We even had a jamboree in which Indian and English scouts were also involved. Though a lot of people (about 20,000) went to Africa from here, we stayed until September 1944 when my mother, brother and I left for the Polish settlement in Valivade-Kolhapur. I ended my grammar school education and went on to a teacher training college. We only left in November 1947 and joined father in England since we could not return to Poland as our entire homeland had been part of a vast sell-out to the Soviets.

The following July we emigrated to Canada where we now live.​