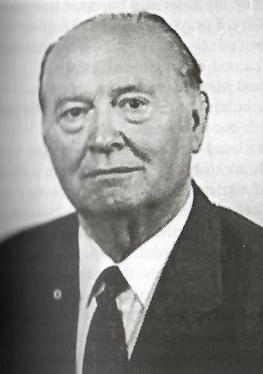 In December 1946, helped by UNRRA, I met up with mother in Dover. She had moved to England with a group of Polish soldiers, families who had served with Gen. Anders. In February 1947 with the 5th KDP I had a place at a Grammar School near Swindon in Wiltshire for students from all military grammar schools were offered the chance of further study. I benefited from this. I graduated from the London University in June 1955 having been awarded the degree of Electrical Engineering (B.Sc.Eng.)
So it is that Listopadówka and Wołyń remain just part of our memories. I was not given a chance to live my life there so had to find some other place. It was not easy. Yet in the end the scales of victory in the duel with fate tilted in my favour. Now I hope that my grandchildren may live without problems in a Europe without borders.

‘Still longing?’ – I was asked by a present inhabitant of the district of Listopadówka when, in May 1995, for the first time after 56 years my friend Józef Serafin and I visited the place of our birth and happy-go-lucky childhood.

The question embarrassed me because it is natural to feel some sort of sentiment and attachment for the place of one’s roots and yet, looking at this spot shorn of any traces of the past and the endless flattened fields, I felt a kind of emptiness and utter amazement.

The military osada Listopadówka was founded in November 1922. There my father, Wincenty Ptak, was given a 12 hectare plot of land on which he built his homestead. On 28 October 1926 I became his first born and went on to attend the primary school in Listopadówka until 1939. Winters in Wołyń were very sharp, on the other hand summers were sweltering. To this day I can recall the smell of cut grass warmed by the sun and smoke floating through the air in autumn. Those were indeed years of carefree childhood.

Up to September 1939 we were very content. Only from 17 September when the Soviet Army overran the East Borderland of Poland did everything start going downhill. The Ukrainians organised committees in which the Soviets placed their commissars. Right from the beginning it was known that people would be deported to Siberia. Thinking that such an event would prove tragic for the family, my parents decided that mother and the three children would move across onto the German side, leaving father on the farm until the moment of deportation when he would join us.

On 7 November 1939 we reached the station of Wojnica. From there we went by train to Włodzimierz Wołyński and then to the neighbourhood of Sokal near the River Bug. Our crossing the river was done during the night of 10 November and we were helped by smugglers from the German side. Once across the border we reached Zamość where helped by a local priest, we found accommodation with Mrs Kowerska at 10 Zdanowska Street. My two younger sisters, 9-year old Danuta and 11-year old Teresa, were cared for by the Franciscan Sisters in their convent at Łabunie, a building which exists to this day.

We stayed in Zamość until March 1940 when mother and I were rounded up for forced labour in Germany. After two days train travel we reached Harpe, Osterburn near Magdeburg. I stayed there from March 1940 to March 1945 working for a farmer, and was liberated by the American Army. That was a memorable day in my life!

The next nine months I spent with the 7th American Army. There was a period of two months on the front near River Elbe and later some time near Heidelberg.

In September 1945 through the help of the Red Cross I found my father who was in Gen. Anders Army in Italy. I spent four weeks holiday with him there. The Mediterranean climate with its blue sky and the presence of the Polish Army – were for me something completely new yet simultaneously comforting after such a long time of uncertainty. I could not stay permanently in Italy so went back to Germany where I stayed with the American Forces until December 1945. After this I attended the Polish Grammar School at Lipstadt in Westphalia where in an intensive course of study I completed the 2nd Form Grammar School curriculum.

Edward Brzeżiński has written about life in Listopadówka before the war.