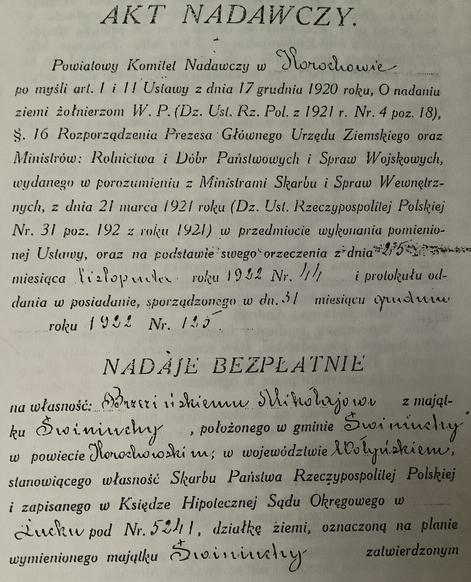 ​​ I am from Osada Listopadówka, formed by the partitioning of an estate Swiniuchy [Translator’s note: The AKT NADAWCZY - Deed of Land Endowment shown below refers to Świniuchy] in Horochów district in Wołyń.

The original deed in my possession dated 25 November 1922 granted the plot to my father Mikołaj Brzeziński, former Cavalry Sergeant of the 40th Lwów Riflemen Infantry Regiment. This was likely the establishment date of our little settlement, about 20 settlers. In the allocation of plots, my father probably received the worst – criss-crossed by trenches, shooting ditches, rolls of barbed wire, some giant pits, which according to the stories of local Ukrainians were quarters for horses, and, to make it even merrier – a military cemetery. I remember this cemetery, exhumation of corpses by a government commission and their transport to some other, common cemetery. I was not yet going to school, so it could be the year 1927-28.

My father first arrived on the plot by himself, later brought my mother and me, probably in 1924 (I was born in 1923). My earliest memories are of the time when my father was establishing an orchard and digging a well. I could have been three to four years old then.

A primary school, four-class only, was in Mr. Barszczewski's spacious house and our first teacher was Gertruda Sosicka, later Ostapowicz.

Our settlement was divided by fields belonging to Ukrainians from a nearby village Wojnin. The relationships with Ukrainians were proper in the first years but later were characterised by mistrust, even animosity from their side. “My was wyreżem” [Translator’s note: Ukrainian – we will slaughter you] was a common threat addressed towards Poles. Because of that the “Krakus” was formed, a paramilitary association of settlers to defend against possible attacks. I do not remember any incidents though.

Just before the war, the settlement purchased building materials for a new school, but the construction never started. Most of the settlers established themselves well, but there were no major achievements – too far from the railway and poor roads.

From 1937 to 1939, I was attending T. Kościuszko secondary school in Horochów and my mother took care of the farm by herself with hired hands, because my father died in 1935, having been ill for three years before that. Therefore, everything was rather lame.

On the 10th of February 1940 all of us met the same fate. My mother, two younger sisters and I “landed” in a "trud-posiołek" [Translator's note: Family work camps in USSR for civilians not tried or convicted of crimes] in forests around 180 km south of Archangielsk.

I am writing this short reminiscence of my borderland’s settlement to satisfy my heartfelt wish – to remind those that come after us that our fathers and we lived there, it was our home and our land, it was Poland.

A picture of the Deed of Land Endowmentt given to Mikołaj Brzeziński.

Aleksander Ptak has written about his family's deportation from Listopadówka in 1940.

​​Back to introduction page​