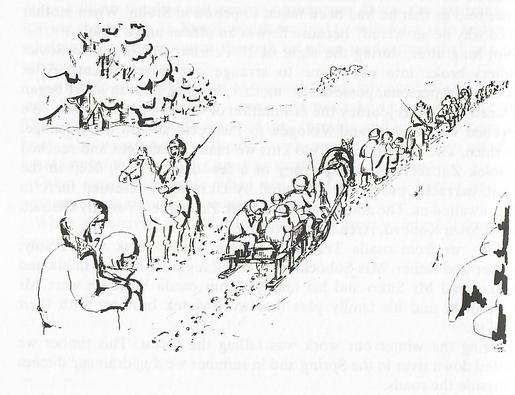 Following the distribution of the school certificates at the Eliza Orzeszkowa Grammar School in Wilno in June 1939, I arrived in Terebieżów for my summer holidays. My father, 2nd Lt. Edward Wadlewski, possessed a holding on the military osada Terebieżów in the Stolin district of Polesie. The land was rented out as father worked in Wysock, where we lived and only went to Terebieżów for holidays. My mother and brother Roman were already there when I arrived from Wilno. That carefree holiday was disrupted by the outbreak of war. Refugees from Warsaw began to appear. Among these was my cousin Edward Żytkiewicz, who lived with us until January 1940.

Once the Soviets had invaded Polish territory father stopped working and returned home. Then began a succession of interrogations by the NKVD until January 1940 which proved to be his final arrest, from which he never returned home. The NKVD oficer who searched the house told us that he had been taken to prison in Stolin. When mother asked why he answered, ‘because he was an officer and a Pole’.

Not long after, during the night of 10 February 1940, armed Soviet soldiers broke into our home to arrange our ‘resettlement’. After packing our personal possessions mother, brother Roman and I began a forced strenuous journey, the destination of which we had no idea. We travelled via Moscow and Vologda to Plesyetsk station in Archangel Province. The last stretch of 140kms we made by sledges and reached posiolek Zaozerye after a journey of a few days. There, deep in the forest, barracks, previously inhabited by Ukrainians resettled there in 1930, awaited us. The address was: Posiolek Zaozerye, Prozerny District, postal town Konevo, Archangel Province.

With us from osada Terebieżów were: Poddubniuk with family, mother and father, Mrs Sobocka with her daughters Irena, Halina and Danka, and Mr Sitko and his family. From osada Weronie were Mr Bratowski and his family plus the two Świątek brothers with their families.

During the winter our work was felling the forest. This timber we floated down river in the spring and in summer we dug ditches alongside the roads.

From the NKVD in the posiolek we learned that father was in prison in Mińsk, but we were forbidden to correspond with him.

After the agreement signed between the Government of the Polish Republic in London and the Soviets, we set off south to where a Polish army was being organized. We travelled through Vologda, Sverdlovsk, Tashkent and Samarkland to Kermine where the 5th Division was being organized. After being accepted by the recruiting panel as a volunteer in the Auxiliary Women’s Service, I was sent to Kenimekh. My brother joined the junior cadets. On 25 March 1942 came the long awaited departure from Soviet Territory. My mother and brother did not live to see that departure. Both of them died in Kermine.

After leaving the USSR I took a medical course and worked in the civilian hospital. Later I went to Iraq and then Palestine where I did a driver’s course and was posted to the 316 Transport Company.

From Palestine I went to Egypt and from there to Italy. Following the end of the war I settled in England.

In spite of all my efforts I have never discovered what fate met my father.

Halina Szulc (Sobocka) has written about life in Terebiezów before deportation.