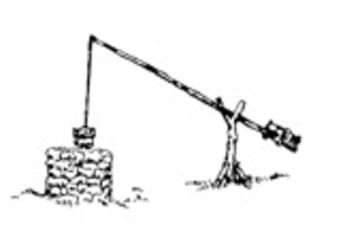 A few years after the proclamation of the Act of 1920 granting land to soldiers-legionaries for the defence of the fatherland, my father, second-lieutenant Feliks Sobocki, born in Słupca in Poznań Province, received a grant of 23 hectares of land from the Land Distributing Commission (Komisja Parcelacyjna) registered in Brześć on Bug. The condition was - all qualified settlers had to settle and work the granted land.

Since my father already held the post of director of KKO (Municipal Savings Bank) and was chairman of the Łuniniec Local Council, he could not have had fulfilled the above condition without my grandmother's help. My maternal grandmother from Pińsk agreed to take care of the farm and her granddaughters: myself and my older sister. Of course, she had 2 or 3 paid helpers.

I remember it as if it was yesterday - the house was small, almost a shack, with only two rooms, a large kitchen and an entrance hall with a ladder to the attic. The floor was made of clay. The garden was overgrown; grass everywhere and an abundance of snakes, which despite their harmlessness were a terror for us children. Behind the house, beyond the yard, stood a cattle-barn and on the side of it was a well with a sweep* and beside it a long water trough for the cattle.

With every passing year, significant changes took place in the settlement. Our 23 hectares were mostly pastures and waterlogged meadows unsuitable for agriculture - about 13 hectares, whereas the arable land was only about 6 hectares. Intense work on the land and gardens lasted for several years and lead to the creation of a 2-hectare orchard with over 100 fruit trees. We had 6 horses, 8 cows, 12 pigs and some poultry. A new multi-room house was built, with a sun-parlour surrounded by rambler roses. Behind the house was a new granary barn.

With time, the plot was rented to an older childless couple in exchange for a free contingent of some fruit and yearly vacations. My father loved that plot of land and took great care of it, devoting most of his savings to its improvements. To be closer to the settlement, we had moved to the county town Stolin, where my father continued to be the director of the municipal savings bank, located in a new building, built by him. Simultaneously, as chairman of the local Military Settler's Union, he travelled frequently to various settlements to study the living conditions of the settlers. Bales of new clothes were sent to our address from Warsaw for the poorer settlers, mainly the ones with five or more children and I with my sister helped to sort these clothes.

I remember that there was constant talk around the house about the co-ops, the Agricultural Associations, and Village Housewives Associations. Female instructors sometimes visited from Brześć. I cannot describe how the work, organization and cultural life of the settlement were, since I was too young for such things. However, I can say with certainty, that both my father and my mother were very devoted to the settlers' issues and very involved in the community.

Coming back to Trebieżów - it was a village located 12 km south of Stolin, half-way to Wysock. Of course, by horse transportation only. The population was mixed: Belarusans, Ukrainians, Jews and Poles. There were a few small stores, with at least one Polish-owned belonging to the Burzyński couple. The clothes market and large stores were in Stolin.

There were only a few plots of land, I suspect 12-14 which were located at the end of the village across from a large estate belonging to a count, which I am not sure, but seems to me, was later auctioned. The closest neighbour was Capt. Czarnota and on the other side a Pupejko couple. I remember that some of the further plots belonged to Ignacy Maćkowiak, Czerwonka, Soja, and E. and A. Wadlewski. By the way, the latter was the elected village mayor of Wysock and his daughter Halina lived for 2 years with my older sister Irena in a settlers’ boarding-school in Wilno.

After the arrival of Soviet troops in 1939, my father was immediately arrested and disappeared without a trace. Whereas my mother, I and my sisters, the older and the younger, were deported on February 10, 1940, together with the majority of the local settlers, to the Archangielsk "oblast".  Out of our osada Trebieżów, only the Wadlewski family lived with us: three people, since their father was probably dead and only the daughter Halina survived.

* A well-sweep is an old-time farming implement. It's a wooden contraption adjacent to a well. In olden times a family depended on hand drawn well water to fill its drinking and bathing needs. The well-sweep was designed [File written by Adobe Photoshop® 4.0] to lighten the load, so to speak. A tall, sturdy tree is used as the base of a well-sweep. It must be Y-shaped at one end. A second, longer tree, the "sweep," is placed in the "Y" of the base at an angle to the well, forming a lever. To retrieve water from the well, the bucket was lowered by raising the sweep. Once filled, the bucket was raised by allowing the heavy sweep to slowly lower to the ground. Pulling up a heavy water-filled bucket required strong arms. But in using the well-sweep, the sweep did most of the work. With a well-sweep on the farm, even children could assist with the water-fetching chores.