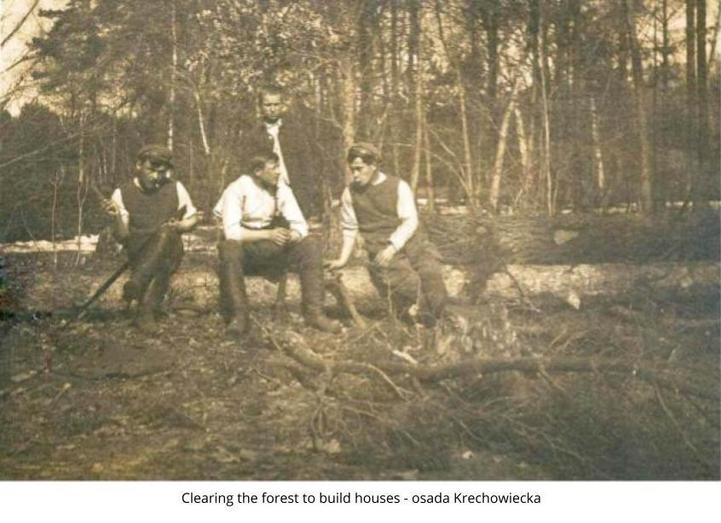 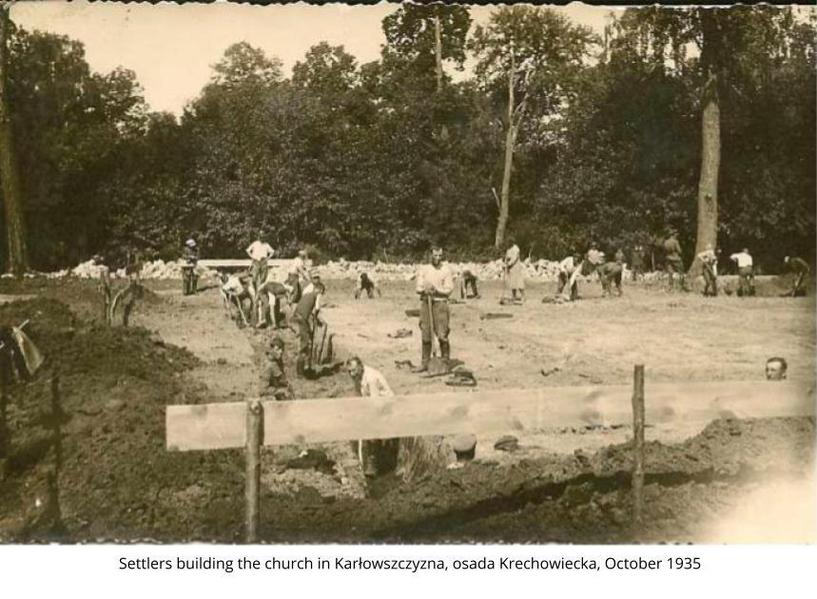 ​​​MILITARY SETTLEMENTS ON THE EASTERN BORDERLANDS

"Soldiers who served a long time at the front or who volunteered to serve in the army before the peace will receive land from the State in preference to others ……  outstanding soldiers especially will get it absolutely free….". Such a promise was declared by Vincent Witos, President of the Council of Ministers on 7 August 1920, calling for battle against the Bolshevik advance. Four months later, 17 December 1920, after the end of fighting but before peace was signed, Parliament passed two important bills, namely, on the incorporation of lands in the north east counties of the Republic (most northerly was the District of Dziśnieńsk in the Province of Wilno, while in the south - Krzemieniec in Wołyń) and to give land to Polish soldiers as previously decreed.1 Before the war, these lands belonged to the State or Russian Institutions or private ownership by Polish or Russian individuals; lands lying empty, fallow, deserted by their owners. In the discussion in Parliament over these proposals, it was stressed that the lands were empty, overgrown, and required a great and prompt effort because of the shockingly bad economic situation of the country.2

To execute this program of transferring lands to soldiers, two institutions were formed. County Committees, whose head was to be the District Administrator (Starosta) while the members were from the Ministries of Agriculture and State Assets, the Treasury, the Ministry of Military Affairs and the Central Land Office. A supplementary bill, issued by the Main Land Office, with instructions for the District Land Distribution Committees,3 empowered the Committees to divide and allocate land to the local population, which in practice was often ignored and soon became a bone of contention against the whole project.

The Ministry of Military Affairs was the most active in this matter, on whose behalf a Military Settlements Section was formed; every division had a Qualifying Committee, verifying soldier's eligibility to land allocation and Military Settlement Groups, whose aim was to manage settlement in particular regions. Early in the spring of 1921, the first brigades of soldiers formed as a communal work-force and expected to farm jointly, arrived in Kresy and in extremely difficult situations started life as settlers. Their patron military regiments gave them horses and carts that were within their means, while the local military commissariats provided food until the first harvests. Besides this, on 17 December 1920 the State authorised each settler to receive 80 cubic meters of building materials and a state loan, for which the sum of 2 billion marks was allocated for all settlements. In practice, the supply of building materials and loans was met with stiff resistance from local governments. The settlers had no personal funds; their strength lay in energy, enthusiasm and strong character, experienced after years of military service. This was quite insufficient; the result was very slow growth. The division, as well as the distribution of the land, was very slow and chaotic; there were cases of lawlessness by the settlers and taking of land. This was caused by the lack of well-worked plans by the settlement authorities, rush and lack of mutual trust between the local authorities, the settlers and the military.

By the end of 1921, criticism of the military settlements was universal and became evident in the press and especially in Parliament. However, at the end of May 1922, the prime minister at the time Mr. Witos declared that "if state help for settlers, which was promised and on which they were counting, was withdrawn, the government cannot be free of blame”,4 but, parliamentary representatives, on the whole, were critical of the achievements to date of military settlements, not always attempting to understand the fundamental causes. Especially virulent against settlement were landowner's associations threatened with agrarian reforms, and national minorities treating newcomers as intruders on the lands, which in their eyes, should be given to Belarus and Ukrainian peasants. The distribution of lands to local people was supported by almost all left-wing groups, and also the settlers themselves. In a parliamentary speech, Juliusz Poniatowski said thus: "without doubt, the viewpoint of the settlers themselves is interesting. Whenever they have a chance to express their view, they demand from the Government local distribution to serve the interests of local people. These people were sent to Kresy, not with political but with cultural and economic aims, and have to live with this population and develop good neighbourly relations”.5  An additional element of hostility by political parties to settlements was their close relationship with Marshal Piłsudski, preventing the influence by any other political parties. Thus, the settlement plan lost the support of Parliament and the Government. The result was that on 24 March 1923, Parliament passed a resolution calling on the Government to halt the occupation of lands for military settlements.6

From the beginning up to the end of 1923, this policy for settlements had distributed 133,146 hectares of land to 7,345 military settlers while 99,513 had applied for allocation.7  In the following years, there was only minimal distribution, within the existing allocation. A statute in March 1932 gave free entitlement to a number of civilian settlers who had purchased land from the military allotment.8  According to the Association of Military Settlers on 1 November 1933, there were 8,988 military settlers9 and it can be assumed that number fell minimally in the following years. The geographical distribution of the settlers (1931-1932) was as follows10:

The size of the land allocated depended on the quality of the soil, but according to the statute, could not exceed 45 hectares. These were allocated to farmers with training and agricultural experience. From the total of 8,355 allocations most, that is 34%, were in the region of 10-15 hectares, 26% were of 15-20 hectares, 19.4%- fields of 20-25 hectares, 13.9% - over 25 hectares and 6.8% smaller than 10 hectares. Most of the 10-15 hectares plots were in the southern part of Wołyń, rich in best quality soils, while in the region of Grodno-Nowogródek and Wilno, the spreads were 15-25 hectares, while in Polesie, where the soil was poorest, they were 20-30 hectares.

The critics of the scheme frequently made provocative allegations that the majority of military settlers had no idea how to work the land and this lack of experience is the reason for low output from the settlements. At the same time, the statistics held by the Settlers Association, showed that out of 7,918 settlers 70.3% were agricultural farmers, 6.9% skilled craftsmen, 7.1% officials, 6.6% students who joined the army straight from school and 9.1% other professions such as businessmen, professional soldiers etc.11  Settlers’ education levels were as follows: 6.5% - higher education, 28% - mid-level, 64.3 % - lower (primary) and 1.2% were illiterate.

As for the military ranks, 40.7% were privates, 42.3% non-commissioned officers, 11.9% junior officers, 3.9% senior officers and 1.2% generals. Wounded settlers constituted 29.5% while 43.2% were decorated with military honours Virtuti Militari or Cross of Valour, of which 9.5 %, (750 soldiers) were Knights of the Order of Virtuti Militari.12