The following year, the situation got worse and settlers' arrears on repaying loans, interest and taxes increased. Standard of living fell markedly; spending on clothing, medicine and children's schooling  was greatly reduced and fell almost to nothing on culture.  The hard years of the crisis led to increased intensified agricultural production. In order to increase productivity settlers introduced cultivation of industrialised crops, increased and renewed orchards, changed the breed of cows for better milk production etc. This was especially visible in Wołyń, where conditions for farm production were significantly better than in other regions. 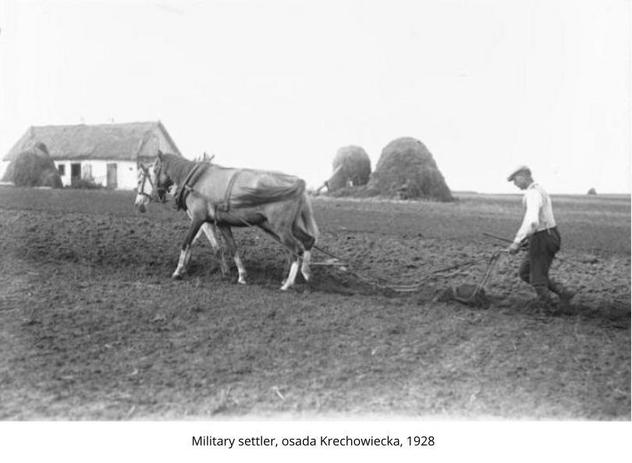 Settlers taking up a free allocation of land in Kresy received minimal financial help. According to the statute from 17 December 1920, a loan of 2 billion marks at preferential rates was distributed at a very slow pace which reduced its benefit, especially as the currency in the first years after independence lost its value fairly quickly. Even by 1923 the whole sum had not been granted.13

During the first years their situation was desperate. They received land without any buildings; there was a shortage of essential agricultural implements. They were accommodated variously - in neighbouring towns or villages, in old barns and often in manually dug-out earthen shelters. Contact with the world was difficult, for the nearest post office or railway station was some 20 km and more, so travel was often impossible. In the spring and autumn, carts were sinking in muddy, impassable roads, while in winter the snowstorms allowed only movement within one’s own property. Help from local government and committees implementing agricultural reform and settlement policy was frequently given unwillingly and with resistance. In the autumn of 1922, over 40% of 5,042 qualifying soldiers were not able to sow any crops, as the boundaries had not been decided. The worst problem was with buildings. Building allowances of wood (80 cubic meters) guaranteed by the State were late in delivery, foresters refused to honour them but in addition, allocations were often made from distant forests. Cash payments in-kind for building materials turned out not to be beneficial. In effect, the indispensable help intended by the statute, originally in about 5,000 zlotys per settler was worth only 1,180 zloty after devaluation.14

There was disappointment amongst settlers with the justness of decisions taken and the atmosphere was depressing. They sent many letters to Parliament, to the agriculture minister and other officials explaining their problems. In the letter to Parliament from the district of Łuck in Wolyn they wrote: "…. the settlers' situation is extremely hard and if help with building materials authorised by the 1st Parliament of the Polish Republic is not vigorously provided in the shortest time, settlers will be forced to languish for several years. The result of not receiving building materials are that we live miserably in earthen dugouts, barracks and primitive huts, which drives us to despair”.15  At last in April 1923, they were granted low-interest credit to the sum of 50 billion marks, which represented less than half the sum necessary to cover most essential necessities.16  The loans granted over the following years at a reduced rate were similarly insufficient, so that the settlers had to borrow money from all possible sources and with various terms of repayment.

As early as 1922, the matter of settlers’ legal entitlement to the land emerged and in spite of constant pressure by the Settlers Association and the settlers themselves, the dispute dragged on until 1926. Deed of Grant was not automatic. A specially constituted commission, with representatives from the Settlers Association and a settler from the respective settlement, investigated the settler’s husbandry and decided whether to award a Deed of Grant, or withhold it until improvements were made, or to remove the settler and give it to somebody else. The Deed of Grant was extremely important to the settler; it allowed legal registration of ownership of land in one’s own name. This tied settlers more to the grant, encouraged investment and making of long-term plans.

Despite poor financial support, the settlements slowly grew in strength and progress was increasingly visible. But at the same time, debts increased. On 1 January 1929, the average value of a property was 10,967 zloty [Ed.note Złoty replaced Polish marks in 1924 at 1.8 million marks to 1 złoty] and after deducting debts to the sum of 3,188 złoty, the remaining 7,779 złoty gave a truer value.17  Even then it was possible to see a difference in results of the settlers’ achievements and other holdings in Kresy. In the years 1928-32, the average output of wheat in the military settlements was 10.6 q/ha [Ed.note 1 quintal/hectare = 1.6 bushels per acre], while none of the others in the east ever exceeded 10 q/ha. The equivalent results for rye from 1 hectare were 10.8 q and 8.61 q; for barley, 11.0 q and 10 q; for oats, 11.5 q and 9 q; while for potatoes, 128.8q and 92q.18

​In the following years the economic situation of the settlers significantly worsened due to the world crisis. According to calculations based on figures from the Institute of Rural Economy in Puławy, net income from 1 hectare in settler’s lands fell from 90.8 złoty in 1928/29 to 18.75 złoty in 1931/32. This was the result of the spread of "price-cutting". From the middle of 1929, the prices for agricultural produce fell rapidly and relative to the price of industrial products was increasingly unfavourable for farmers. Even so, the financial output from settler’s farms was better than average smallholdings in Kresy, which in 1928/29 showed a profit of 73 złotys/hectare, and in 1931/32 a loss of 7 złotys/hectare.19

In the mid-30s, farming underwent renewal and the settler’s situation began to slowly improve. A large obstacle to continued progress was the serious level of debts with banks and financial institutions. Bailiffs were harassing the farmers for repayments of capital and even interest. It became obvious that without State aid their existence was threatened. In the years 1933-35 almost all settlers’ debts - as well as those of other smallholders - were rolled into one by the Agricultural Land Reform Fund, reduced by 50% (loans for drainage by 70%) and spread repayment over 60 years at a lower interest rate of 3% per annum.20 In the following years, despite these apparently better conditions, many were unable to repay the debt and were threatened with farms being auctioning off. At the beginning of 1939, the Head Committee of Settlers, proposed the reduction of interest to 1%, arguing that “the settler on the eastern lands cannot be a weak farmer as he will not be able to carry out the tasks and responsibilities laid upon him by the authority of settlement statutes - service to the State on eastern lands and elementary duties towards future, settler generations.”21

In the second half of the thirties, quite a difference appeared between settlers in Wołyń and those in Polesie or Wilno region. Significantly better results were achieved by farmers in Wołyń on black humus soil compared to the marsh soil of Polesie or the poor soil in the north. The Wołyń settlements were on the whole quite well equipped, with good buildings; the majority had good farm machinery like seed sowing machines, harvesters, winnowers or chaff cutters for feedstuffs. The use of artificial fertilisers and of selected seeds for sowing was common. They preferred a good breed of cows, especially the Polish red, pigs and poultry. The range of plant cultivation was extended to include crops such as sugar beet and tobacco with excellent results on the fertile black earth in Wołyń. Intensive farming required greater manpower, so that many farms engaged permanent and seasonal workers.

In the Wilno region it was a lot worse. At the end of 1938, the newspaper "Kurier Wilenski'' published a series of articles on the results of research into military settlements in this region carried out by the Institute of Economy in Eastern Lands.22 The general view was pessimistic. The author concluded that only 25% of settlements were self-sufficient at a farming level, while the remaining 75% were "sinking in poverty, troubles and misunderstandings" and "languish in worse conditions than local smallholders or peasant farmers". There is a shortage of documents about settlers in particular regions in the years before the war so it is difficult to give definitive answers about settlers as a whole. 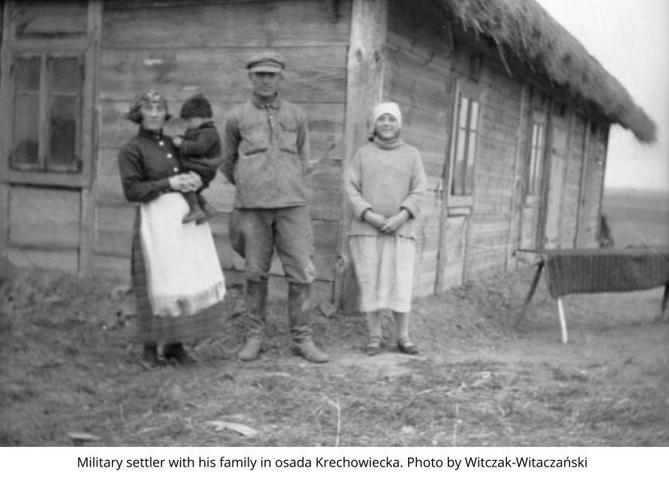