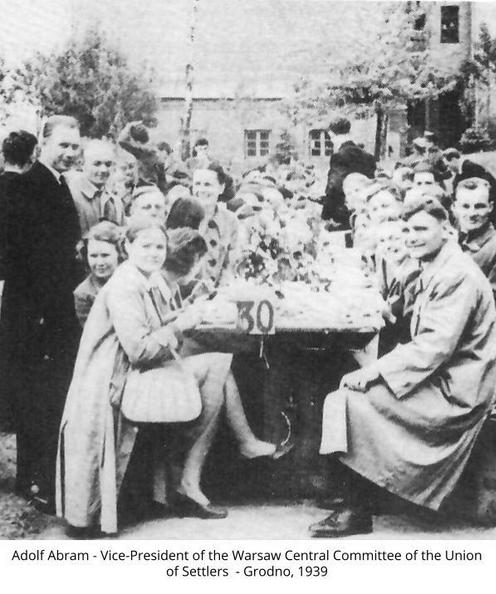 5. The Settlers Union and its Political Leaning

The settlers came to quickly understand the necessity for creating their own organisation representing their interests before the authorities, which would help in handling basic affairs, give advice and guidelines for action in their complicated situation in which they often felt helpless. The first district Settlers’ Union was established in the Nowogródek region just a few months after their arrival to the settlement, and there were 18 such unions across Kresy in mid-1922. However, it became necessary to create one organisation for all the settler regions that would represent and act on behalf of all the settlements. Up until then, settler affairs were not centralised and were left to the decisions of the departments and offices of the Ministry of Military Affairs, the Ministry of Agriculture and State Property, as well as other ministries and central offices. One such organisation became the Central Military Settlers’ Union, established at the 1st General Convention of Settler Delegates in March 1922. In 1925, the Union also incorporated civil settlements into its activities and changed the name to the Central Settlers’ Union, which was then transformed in 1929 into the Settlers’ Union.

From the beginning of its existence, the Union emphasises the role of the settlements in promoting culture and economic progress in Kresy while working with the local population. The range of issues that the Union was dealing with was broad as it covered all aspects of settler life depending on the current needs, namely, financial aid in the form of concessionary credit facilities, matters relating to so-called non-viable land plots, that is, classified as greenfield or insufficient to support a settler family, the organisational, educational and cultural matters of the settlements, education of young people, the participation of the settlers in self-governments and in social work in Kresy.26

In 1926, shortly after the May Coup [Ed. note: A coup d'état by Marshal Józef Piłsudski between 12 and 14 May] the Settlers’ Union and the Polish Rifleman's Association and the Association of Silesian Insurgents initiated the establishment of a new political party -  the Union for the Repair of the Republic. The “Repair” considered it necessary to strengthen the country’s economy and finances through the expansion of industry and enhancement of agricultural productivity, demanding public administration reform, the creation of a strong army, as well as equality for national minorities. This political line was noticeable in the way the Union proceeded and in its steering of the settler group. Among the settlers were - although few and far between - supporters of other political parties, particularly the National Democracy, but the settlements were largely committed to the strategy of their Commander. This was hardly surprising. Piłsudski was their beloved chief, and also a settler, in whom they always had an advocate and mentor. His persona cemented the settlements and protected them from party-political games, especially the nationalistic/clerical undercurrent that could have fuelled the already tense atmosphere in the Kresy. The settlement concept - leadership in the Kresy and good connections with the local communities - would have otherwise been buried.

The passing of resolutions on fundamental matters belonged to the General Convention of Settler Delegates who were elected by the settlers, but the General Board enjoyed wide powers of discretion and exercised “overall control over the work of the organisation”. The province and district Settlers’ Union operated on a lower level. Wiktor Przedpełski, Engineer, was the long-standing president of the Settlers’ Union, while the deputy and “soul” of the Union was Captain Adolf Abram, who was extremely popular with the settlers and Hearth students [Ed. note: Students in accommodation away from home] and who dedicated himself fully to the affairs of the settlers and particularly to the young generation. The Union emphasised independence of any political party although the political involvement of the settlements was unquestionable. The Union leadership on all levels supported the politics of the Piłsudski camp, however it was more inclined to its left wing.