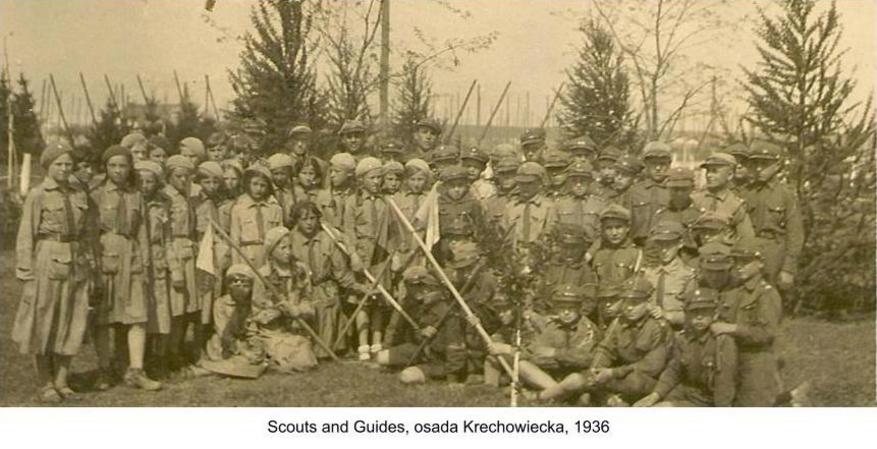 MILITARY SETTLEMENTS ON THE EASTERN BORDERLANDS​

The number of settler children (of military and civilian settlers) was estimated at around 60 thousand towards the end of the 1930s, of which it was forecast at least half would leave the settlements, therefore this group had to be prepared for some kind of profession.24  Already in the mid-1920s when the settler families were in the early stages of development, the Settlers Union started considering methods of education for the new settler generation. They understood that not only should the settler children - the young Kresy cohort - gain a profession but that they should also have a sense of social awareness developed in them regardless of their thinking and understanding of Kresy affairs. In the first half of the 1930s when the number of school-age children exceeded 35,000, the problem of education became one of the settlers’ main concerns. In December of 1937, at the General Convention of the Settlers Union, a resolution was passed stating that efforts must be made for all the settler children to at least complete a 6-year primary school.

Preparation for a profession on a secondary or academic level involved a stay in a city where the general secondary and vocational schools were located. For this purpose, a network of settler boarding houses referred to as “Hearths'' [Ogniska] was established in larger Kresy cities and in Warsaw, housing school-age settler youth. The first boarding house of the Settlers Union was opened in the summer of 1927 in Warsaw and already in the 1927/28 school year it had 77 boarders, 40 of whom were brothers or relatives of settlers. The following year, the precursor of a Girls’ Hearth was set up, initially boarding eight girls. Non-settler youth from the Kresy and also from other parts of the country were accepted into the Hearths as well as the settler youth, but the fees were higher for them than for the settler children. In the last year before the war, in the 1938/39 school year, there were twelve active establishments of this sort, namely:  three Hearths in Warsaw, male, female and an academic one; two each in Wilno and Równo, male and female; and male Hearths in Brześć, Grodno, Lida, Nowogródek and Poznań.

Education methods were thoroughly modern and characterised by a high degree of liberalism, free of any indoctrination whether it be religious or political. It naturally was a patriotic upbringing but without a hint of nationalism. The Hearths tried to reinforce the adolescents’ attachment to Marshall Piłsudski, which they brought from their settler homes but solely in the form of feelings and not of a cult. Every Hearth was self-governed by the students who set the rules for boarders and their community life and tried to develop in young people the ability to put the general interest before their own personal interests. Self-help among the adolescents was expressed in helping their friends with learning difficulties and organising mutual assistance funds, and school shops with essentials, etc. Debating societies were also organised on a wide range of topics. In the 1932/33 school year, students in the settler Hearths took interest in such matters as the significance of savings in the economic life of the country,25  the existence of people on Mars, trade unions, historical materialism, the League of Nations, the death penalty, the free thought of youth, and the topic of unemployment. In the Warsaw Hearth for Girls, a series of lectures with slides was organised for the girls that were meant to supplement the deficiencies in school education at the time, namely: the physiology of pregnancy, delivery and confinement, and venereal diseases. Heritage tourism clubs organised trips that were focused not only on the natural environment or on history but also on various institutions like, for instance, trips to the Sejm or to workplaces like power stations, bakeries or printing houses. There was a strong emphasis on reading and inculcating an affiliation for books, not just in view of the intellectual development of the wards but also bearing in mind that they were going to be the future propagators of books in the Kresy, where the level of culture was not that high.

Singing, music, and physical education played a big part in the upbringing of the settler youth. Every Hearth had a choir and many had various kinds of musical ensembles. Daily physical activity was compulsory and, apart from that and depending on personal interests, young people could participate in athletics or other sports groups. Starting in 1936, annual Sports Events and Song Festivals were held in different Kresy cities, which were attended by the Hearth youth, local settlers and - to add pomp to the event - also by various state and military dignitaries.

They constituted wonderful displays of youth, vitality, and settler joy, memories of which have always been held dear by their attendees. Hiking trips across the Kresy lands were organised during the summer holidays. The rules required visits to other settlements and learning about the problems of the places they encountered on their way, for instance, the economic conditions, the relations between various groups in society, hygiene, relationships between parents and children, schooling, and many others, covering economic, social and cultural affairs, too.

The Settlers Union paid a great deal of attention to young people who were going to stay in the settlements. Following long discussions with educators, agricultural experts, and leading settlers the decision was made to send the settler youth on internships to Poznań and Pomeranian farms. The committee that was set up for this purpose visited these areas in November 1938 in order to investigate available possibilities and discuss the terms and conditions of the internships. They were planned to begin in July 1939. Another form of preparation for work in Kresy countryside were social courses organised in the Wilno region from the year 1930, which were intended for Polish, Belarussian, and Lithuanian youth. As of November 1937, these courses were held in the Settlers Union centre in Prudziszcz, and it was referred to as the Rural Social University. The curriculum covered a broad range of topics that were deemed necessary for a future organiser of rural life on the north-eastern lands to master which included knowledge of land management methods, self-government, cooperatives, and the organisation of cultural life.

In the last few years before the War, through the endeavours of the Settlers Union, a hostel was built in Kukul near Worochta for settler youth to go on skiing or hiking trips as well as for those who required special health care.

Contact with the Hearth by students did not end with them leaving. They formed an Alumni Association of former wards of the Hearths (ZOS) [Związek Osadników], which published the “Kresy” journal. Proof of the youth’s attachment to the Hearth can be found in the fact that at the beginning of the 1970s a commemorative plaque in memory of Adolf Abram, the Vice President of the Settlers Union, which referred to him as a “great educator of young people”, was installed in the Church of St Mary Magdalene in Wawrzyszew, in the Warsaw suburbs, by a group of  former wards of the Warsaw Hearth.

EDUCATION AND FORMATION OF SETTLER CHILDREN -