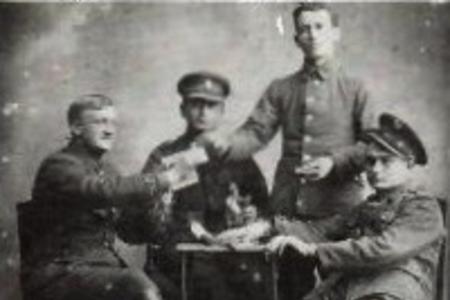 There were five of us, brothers, in the family and we all went and volunteered to fight for the independence of our country. Since the youngest was only 15 years old, he was sent home to the great delight of mother.

Of course, every one of us had different life stories. I, for instance, was drafted into the Russian Army. During the Russo-German War, I was wounded and taken captive. Forcibly exiled deep into Germany, I was treated and healed in hospital. After my recovery, I escaped from captivity and enlisted in the Polish Army that was being formed. After Poland regaining its independence, my older brother and I were allocated land with plots alongside each other in a settlement under the name of Klucz, in the Nowogród Province. Since this settlement was located between Belarusian villages, life was not easy. I had just managed to raise the buildings when they burnt my barn and stables down along with the livestock. I had to go to the nearby estate where I found employment as an administrator for two years. After that period, I returned to the settlement and once again started building, thanks to the considerable help of the local landowners, particularly Mrs Strawińska, who was a wonderful Pole since she had already managed to start up an orphanage for Polish children in those difficult times.

Our settlement was in a beautiful location - the house stood on a hilltop at the bottom of which was an orchard with over a hundred trees I had planted together with my wife. Between the fruit trees (trees were painted with white lime in a cordon) stood 15 beehives also painted but in various colours.  This area was ringed by a high fence and in addition, spruce trees were planted from the side of the meadows which protected the orchard from easterly winds.

Beyond the spruces was a beautiful strip of meadow and, finally, a river, full of fish and crayfish. The river was the boundary from the east. Further down, on the opposite side, that is, to the west, there were a dozen or so acres of fields, and beyond that extended a relatively large forest of about 77 acres, stretching out upwards. There were spruces and pines on the left side of the forest with masses of boletus mushrooms growing between them, and the birch grove on a hill was full of red pine mushrooms and other mushrooms as well as wild strawberries. Beyond the forest were fields, right up to the next settler.

Our settlement was in a very nice location; there was a forest, a river and a field, so much so that Jewish scouts came to camp in the summer. They would rent out half our house, the barn, the granary; they would build a huge table in the glade in the forest and pitch their tents in the forest itself. And, so it was that year in, year out, in the summer, at least for a month, the settlement was swarming with people, and there sometimes was as many as up to 120 people. It was a great pleasure to be with them and, importantly, we didn’t have to travel to the market because we could sell everything - dairy products, fruit, vegetables, and poultry - right where we were. This saved us time and the profits were good.

Apart from that, we started raising pigs for bacon, which also gave excellent profits. And, in this way, we started to stand strong on our own two feet. We began building better houses, buy vital machines for the farm, in a word, the farm flourished.

Allow me to cite this conversation with a certain Belarusian - these are his exact words: “Oh Lord! I don’t think even heaven could be nicer!”

Unfortunately, this happiness did not last long, more war turmoil, exile to Russia and Siberian penal labour. We thank God that not a single member of our family perished and that we have all found ourselves in the free world.​

​​See recollections of deportation and after by Wanda Wysocka