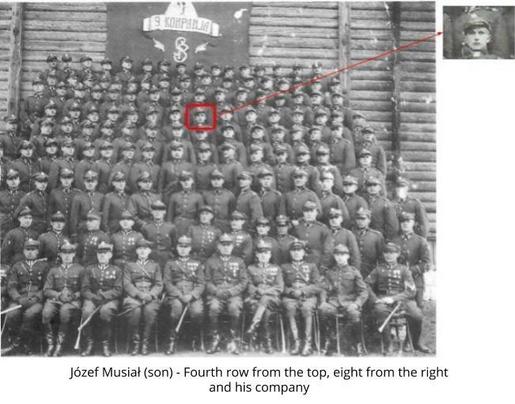 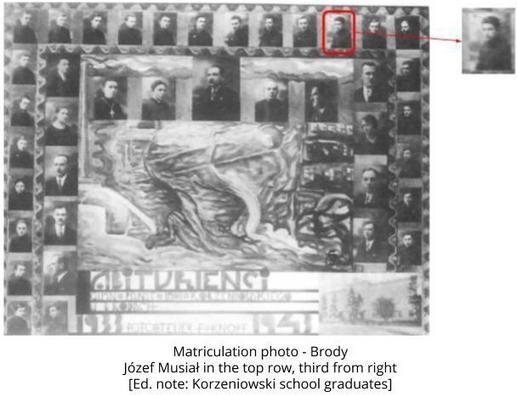 ​ The settlement was composed of military settlers – our fathers who fought in Marshal Józef Piłsudski’s units in the First World War. When Poland recovered her independence they received plots of land in the Eastern Borderlands.

Our daddy, Józef Musiał, served under the leadership of General Stanisław Kopański (a lieutenant at that time). They spent the entire war together, and later received plots near Radziwiłłów. A plot was transferred to our ownership from the estate of Radziwiłłów, located in the Radziwiłłów community, Dubno district, Wołyń province, and registered in the mortgage book in Równe with nr. 5321, having a total area of 26∙6828 hectares. About three hectares were meadows located a bit further away by the river. We often went there, especially in spring and summer, for the haymaking and picnics which I remember very well.

Our neighbour on one side was Mr. W. Strelau, who married the widow after Mr. Górak. On the other side were the plots of General S. Kopański and Colonel Sarnecki rented by Mr. E. Piotrowski and in the final couple of years by our father. Mr. Piotrowski had moved away to Dubno to his own property. Radziwiłłów is a nice and clean country town where Poles, Ukrainians and Jews lived. We had a beautiful, large Catholic church led by a parish priest Father Mikołaj Brodecki. There was also a large and externally charming looking Orthodox church but I had never been inside and also a synagogue. Through the centre of the town ran the main highway Lwów-Brody-Radziwiłłów-Dubno, which continued all the way to Łuck, capital of Wołyń. The part of the settlement where our parents had their plot was located two kilometres past Radziwiłłów, on the way to Dubno. The other part of the settlement was located along Krzemieniecka Street, near the railroad tracks.

The beginnings of the settlement according to my parents’ stories were very difficult because there was nothing there but open land. But for as long as I can remember each plot had a smaller or larger house, cattle sheds, stables, barns and other farm buildings. The buildings were surrounded by beautiful orchards, and vegetable and flower gardens. As far as the eye could see extended beautiful fields of grain, potatoes, clover and large amounts of cattle grazing on meadows.

In the early years after the war the settlers regularly travelled for military training to Dubno and after 1930 they were all reservists.

A seven-class state public school was located in the suburbs of Radziwiłłowo. Its director was Mr. Byrka, and of the teachers I remember Mrs. Kurcz, Messrs Klusik and Kołodziejczyk. This school was attended by the children of settlers, town dwellers and inhabitants of the nearby villages. Our school had around 700 students out of which half were Poles and the rest Ukrainians and Jews. The classes were mixed. For Poles and Jews the lessons in Ukrainian language were voluntary. We were divided and attended separate classes for Religion which took place twice a week. After finishing the seventh grade in the final years of the settlement's existence six students travelled to the secondary school in Brody. They travelled by a special school train. Some took courses in Radziwiłłów and those who could not study during the day attended evening courses.

The Scouts, as my sister Irena recalls, were formed in the years 1930-32. Initially, a boy scout troop was formed, to which my brother Witold belonged, and the girls were organised a bit later. These were aged 13 -15 years old. In 1937 a restructuring took place and younger girls started to be admitted. Two girl students – Irena Musiał and Elżbieta Langer - were sent in 1938 to the scout congress and training in Janowa Dolina. After their return from this training they organized a girl guide troop with the help of the school, to which I was admitted. Young people's activities mostly centred around the school directed by the teachers. In the centre of the town we had a large library for the adults and older youths whilst children used the school library.

I remember when in 1938 our Radziwiłłów parish was visited by Bishop Gawlina’s deputy from Łuck. The entire town was nicely decorated. We welcomed the distinguished visitor in front of the church. All children from the school and the entire town council participated and we were also joined by other religious denominations like the Orthodox with their priest, and Jews with their rabbi.

The reservist-settlers in their beautiful uniforms on horseback greeted the bishop before the town and solemnly processed all the way to the church. In front of the church they formed a row and kept order. Scouts were also present in the row. The celebration was splendid. After a solemn mass,  confirmation took place. Many children, young people and adults received the sacrament of confirmation, because a bishop’s visit was a rare event for us. On that day, my sister and I received the confirmation together and our school director Mr. Byrka was the confirmation father for all the schoolchildren.

Our family consisted of six people: parents Józef and Zofia, and four children. Two sons: the oldest Józef, who in 1937 finished cadet officer school and was serving as second-lieutenant in the anti-aircraft artillery (he went missing after the war of 1939) and Witold who attended a secondary school in Brody (he died in Russia serving in Polish Army). My sister Irena passed the entrance exam to a secondary school, but this was interrupted by the war (she now lives in the United States) and Alina (I finished four classes of the primary school in Poland and now live in England). Today there are only the two of us, my sister and me. The whirlwind of war took all the men and my mother died in England.

And so the graves of our family are scattered across the globe whilst the land remains, but for whose pleasure? Certainly not ours. For us only memories and longing remain.

See recollections of this Osada before the war by Piotr Jankowski


See recollections of deportation and after by Janina Chojnacka