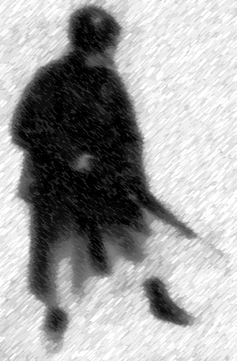 The Ghostly Soldier of Buzuluk

He walks tall and proud across the Buzuluk soil amidst the towering trees
He remembers when the snowflakes fall and the flowing rivers freeze
And the end of autumn months when the warm winds turned into frost
Breaking men like shattered twigs, as hopeless wishes for many were lost

His army was formed of ragged, ravaged, shoeless and broken souls
Unwavering, to battle defeat, with the proud army formation of Poles.
Despite the desire to regain their freedom, they couldn’t fight the cold
Hungry, wet in freezing temperatures in uniforms too thin and old.

He nears an earthly hut where he once slept and a fire warmed his bones
He sees himself frozen with fever and remembered thinking of home
Beside the burning embers he prayed as he reached into his breast pocket
Gazing upon a tiny photograph, of his son, and his wife wearing her locket.

Everyday and night he prayed for them and promised to try and come back
But his prayers went unanswered as the cold of the Buzuluk winter attacked.
The fever burned itself into his weakened state making this his last command
Whatever was left to do in this wretched place was no longer in his hands.

They buried him in the snow-covered tundra amongst the others that died
Spring awakens with pine needles and the wind-opened anemone at his side.
The gentle, ghostly spirit with blue sparkling eyes and blonde wavy hair
Wanders to where he came from and watches over those for whom he cared.

The ghostly shadow still visits the boy who is now in the body of an old man
And still kisses the cheek with tears that drop as over him he stands.
The man awakens to a familiar scent that he has known since he was a boy
He cannot explain it, doesn’t know it by name but feels its love and joy

The ghostly soldier walks away with the white anemone on his lapel
Smiling at the little boy he knew, for he watched as life served him well.

3 God How I Hate the Cold
4 The Archangel in a Soldier's Boot
4 Mamusia and the Red Scarf
5/7 Long Road to the Army
9 The Eagle's Tear
9 Dziadek did you have a Gun?
11 The Polish Soldier