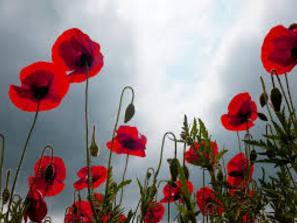 Together, two old veterans walk the aisle slowly on this Remembrance Day
Their grey hair is covered with a soldier’s beret and medals on their chest
The beret represents a soldier and the medals were in honour of his best.

The red poppies they have on their lapels are worn with a soldier’s pride
To remember all of those they had lost and how they bravely died
They have come to honour their comrades of war and say a special prayer
To thank the men who died in battle so they could get out of there.

They asked God to remember the men who carried the burden of war well
And silent moments replayed the years when they did their time in hell.
Not only were the dead remembered, but all those who were left behind
All that suffered the tragedies of war only inflicted by greed of mankind.

There are many heroes of war today, but none quite as special to me
As the old Polish soldier who had to fight the tyrants of evil to be free.
Not only did he have to fight for freedom and face the enemy’s wrath
But had lost everything that meant anything to fight this bloody path.

He had watched his family die, friends disappeared and home was lost
His country ripped apart and instead of promises he was double-crossed.
Every day the vision of his future seemed lost in the confusion of war
With no home to return to, he didn’t know what he was fighting for.

He tried to forget and fought the battle still hoping for one day to be free
He tried to forget everything and just accept what was meant to be.
When all was won and war was over,. the world would right the wrong
But instead, the world closed its eyes on him, celebrating freedom’s song.

What the Polish soldier had lost to get here didn’t matter anymore
The soldier was homeless, displaced and no one would settle his score
He had to rebuild his life on memories left behind or shut them out
And had to try to stop asking himself everyday what this was all about?

If this was God’s test to challenge his strength or maybe even his faith
His toughest burden that lied ahead was to try and forget to hate.
He had to leave that all behind, blood-soaked into the earth with pain
And rise above it, the best he could, just so that he could live again.

The old men prayed on bended knee and hummed a bit to the songs
Embraced by all the spirits they had loved that had been wronged
I couldn’t help but feel the indestructible spirit of their years
And somehow in a second, their world would embrace me in tears.

I cry for the Polish soldier and I cry for those they’ve lost
And I wear my poppy for their war and to remember what it cost.
2010

3 God How I Hate the Cold

4 The Archangel in a Soldier's Boot
4 Mamusia and the Red Scarf
5/7 Long Road to the Army
6 The Ghostly Soldier of Buzuluk
9 The Eagle's Tear
9 Dziadek did you have a Gun?