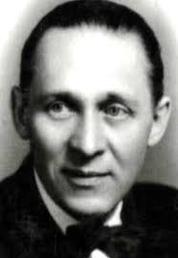 Feliks Konarski was a Polish poet, songwriter and cabaret performer.

He was born 9 January 1907 in Kiev. After completing his school education he started studying Polish at Warsaw University, but decided to leave and started writing poems and song lyrics and also became a cabaret performer using Ref-Ren as his stage name.

In 1931 he married the actress Nina Oleńska.  In 1934 they moved to Lwów where Feliks established a theatre group. At that time Lwów was one of Poland’s great entertainment cities.

After the Soviet invasion of Eastern Poland in September 1939, Feliks Konarski performed as part of a travelling orchestra in a number of cities in the Soviet Union.

Feliks Konarski, with the 2nd Polish Corps was evacuated to Iran where he established the Polish Soldiers' Theatre. At the end of the war he was transported to Britain where the soldiers were demobilized. Towards the end of 1946 he organized and conducted the Ref-Ren Theatre in London. This theatre of Polish exiled actors, travelled extensively, entertaining Poles worldwide with their humuorous skits and sentimental Polish songs.

In 1965 Feliks Konarski and his wife settled in Chicago, where they organized numerous Polish Cultural activities as well as continuing to perform in Europe and the US.  He remained a patriotic Pole who wanted independence and freedom for his country.  He died in 9 August 1991. Although the lyrics to 'Red Poppies on Monte Cassino’ are his best-known work, he also wrote and composed of hundreds of other poems and songs.

He was awarded the Order of Polonia Restituta (Knight's Cross and Commander's Cross) twice, first by the President of Poland in exile, and then posthumously.

All poems are translations.

They trudged ....
On the Death of the General