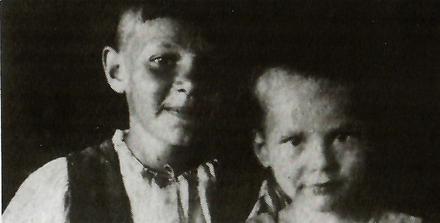 The women from the collective farm were sent to Krasnovodsk and then by boat to Pahlevi in Persia. Meanwhile, the orphanage children were sent to Ashabad through the mountains to Meshed, where a rich Persian handed over his homes and gardens for the orphanage’s use. The children were very sick suffering from all manner of illnesses. Jurek had scabies and, knowing how terribly infectious this was, he used to grab my hand whenever I visited him so that he could infect me and force me to stay with him. We received fresh clothing after each wash and were given a lot of hard-boiled eggs. he lady supervisor told us that Jurek and I, as well as some other children, were going to meet up with our mothers in Tehran but that all our heads had to be shaved once more. In the train to Tehran we sang; we were not hungry. On the station we were greeted by mama and Witek. Mummy told us that Staś, Jania and Edzio had also left Russia which meant that the whole family was safe, except we knew nothing of daddy. 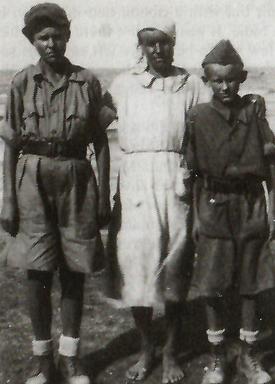 We came to Ahvaz on 24 December, Christmas Eve 1942, Mama, Witek, Ala and Jurek. We prepared for our first Holy Communion and mother instructed us in the Catechism. On 10 February 1943, we took a photo in Ahvaz, I with no hair but with a ribbon tied in a bow. In March, we set off for Karachi in India. It was very hot there and I often suffered with a sore throat. A few weeks before we left came the sad news that General Sikorski had perished. People hearing this on the radio were crying. In August, we left Karachi for Tengeru in East Africa. Tengeru was a very big settlement. 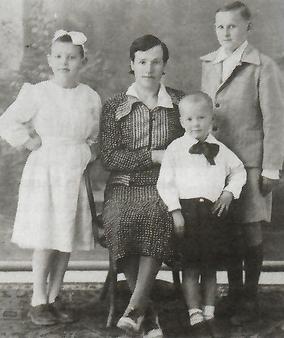 Ala, mama, Jurek and Witek.

​We left the train in the evening at Kizyl-Tepe: mother, 15-year old sister Janina; I, Alina; and Jurek, aged 5. There were lots of others besides us – mainly women and children. Mother told us to sit on the bundles and wait for her. When she returned, she said that at not too great a distance was a pigsty owned by an Uzbek woman. As she no longer kept live-stock, she would allow us to sleep there overnight. All this time, because of hunger, I was crying and mother gave me something to eat. I don’t know which was the more bitter – my tears or that cattle cake they fed to camels. Anyway, we and the other women with children went to rest in that pigsty. During the night, there was a terrible scream because a thief pulled our little bundles out from under our heads. In the morning, somebody said that we had to go somewhere or other to register the families. We found that place in the evening only to discover crowds of people, lots of tents and a fat man stirring something in a cauldron. We were offered nothing as we hadn’t been registered but mummy sent Jurek with a little mug and he brought back some soup.

Once registered, we were allocated a tent and given a piece of bread and a chunk of cheese. From now on, each day was very similar to the previous one. Though it was only the first half of April, it was very hot so that we noticed the lack of water and the stinking ditch serving as dug-out latrines.

One morning, mother and Janina went to hunt tortoises on the steppe. They came back in the evening tired out. Mother said, ‘Ala, kill a tortoise’. So, as one emerged from the sack and stretched its head out, I stabbed it with an awl, then, holding the head I cut it off with an axe. I then turned the creature on its side and hit it until its shell broke. Then with a knife I separated the shell from the body, cut off the legs and squeezed out the eggs. We made some broth with the meat.

An Uzbek brought some apples to sell. ‘What if I steal one?,’ I thought. Mother always said, ‘You mustn’t steal’.

In our tent, there was a very fat lady who one day started to moan loudly. Mother sent all the children out of the tent but we didn’t know why. This lady was giving birth but I’ve no idea what happened to the baby.

In the neighbouring tent lived a very skinny girl and her mother. The girl’s father came from the Army to visit them. The girl died. Standing over her grave, her father wept. His head hung down on his chest and he shook with sobs. Until then, I didn’t know that men could cry.

Mother learnt that girls were being taken into the Cadets in Kermine. It took us a long time to convince Janina that she should go because she didn’t want to leave mother. We all went with her to the station though she was still crying and clinging to mother. In the end, she left along with other girls she knew, of the same age as herself.

The authorities were insisting that women should go to the collective farms to work but no children were to go because the work was very hard and there was little food to be had. So, hand in hand, we went to the orphanage in Kermine. On our way to Kermine, mother said that, when we reached there, we should have a photograph taken, so that when we eventually meet up with daddy we’ll be able to show it to him. I was quite sure and with all my heart believed that, if we could only see him, I would never be hungry again and for all of us things would change for the better. We took a photograph and went to the orphanage. But the superintendent, Mrs Orłowska, informed us that they could not accept children with mothers but only the orphans; so we had to go back.

We face the 7km return journey and, while mother carries Jurek, she tells me to collect a particular kind of plant. ‘This is hogweed’, she says, ‘and I will make it into soup’. Unexpectedly we come across the soldiers’ camp. ‘Who are you?’ they ask. Others come to take a look at us as they call out that we are Polish children. They completely encircle us and bring us cereal in mess tins. We can’t eat all they bring as they bring more and more tins of food, so mother takes off her headscarf and ties all that cereal in it for later on. Along with mother we thank all these very kind, thoughtful soldiers and (mother’s idea) Jurek lifts his two little fingers and says, ‘Salute!’ May the Good Lord bless you, soldiers!'. And we leave.

Mother registered for work on the collective farm so she could now send us to the orphanage. On a small scrap of paper she wrote our names and surname, the names of father and herself, and our dates of birth. She rolled up the paper, tied it with a piece of string and hung it around our necks saying: ‘It is written here who you are’. She said good-bye and went away. Within half an hour, she came back and then came again after that. Poor dearest mama just couldn’t tear herself away from us children!

In each tent there were lots of children and just one lady to look after us. Mrs Wiśniewska, a mother of two year old Marysia and four year old Waldemar came to me. ‘Ala’, she said, ‘you are a brave little girl.  I’m going with your mother to the collective farm. I’m not asking you to take care of my children but, when Marysia starts crying, perhaps you’ll ask her what’s the matter and try to cheer her up’. I treated this request very seriously and our little foursome always stuck together. One day, a woman from the collective whom I didn’t know brought us two eggs – a present from mummy.

After four weeks, we were taken by cart to another orphanage. There we slept on the floor. I had Jurek beside me, the only boy in a room full of girls, for he did exactly as mother told him and never left me even for one step. Now ladies and not I looked after Marysia and Waldek. There came a time when I started feeling a sort of piercing pain in my stomach and I ran a very high temperature. A doctor summoned by Mrs Orłowska sent me to the hospital for I had typhoid fever. Before I left, I said to Jurek: ‘Look, I’m going but I’ll soon be back, until then you stay here’. The whole time I was in hospital I had pangs of conscience that I had told him a lie but Mrs Orłowska looked after him. As for me, I was very ill but I don’t know for how long. I lost all my hair and at times I was tied to my bed as it seems that, when I had a high temperature, I used to get out of bed planning to run away. I know we were given chocolate which I hid under a pillow for Jurek.

One day, Mrs Orłowska came to visit me and said, ‘I’m taking you out of here because the orphanage is going abroad and Jurek refuses to go without you’. Despite the doctor saying I was just passing the point of crisis, we were in a cart on our way to the train. In our carriage there were a lot of women and children all dressed in tatters. I suddenly heard a voice call out, ‘Is Ala Świercz in here?’ It was mummy, also in tatters, her skin almost black with sunburn, and shoeless. ‘Where’s Jurek?’ she asked. ‘In one of the carriages.’ She found Jurek suffering from eye disease, trachoma. ‘I can’t see you, mummy,' he said, and used his little finger to lift his eyelids.

Witek, Jurek and I started school. We were allocated two round huts. Next year Witek left for the Cadets and soon after we were joined by Edzio who arrived from an orphanage in Masindi. Mother learnt about Katyn and so realised that daddy was no longer alive. She had a heart attack and was taken to hospital. I, now a 13-year old, had to look after Jurek, do the housework, the laundry and visit mummy in hospital. In 1948 we arrived in England and, thanks to Divine Providence, the whole family came together thanks to our Mummy, and from Jurek and me especial thanks to Mrs Orłowska.