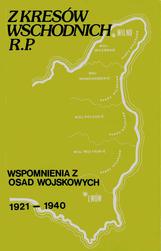 Settlers in front of the community centre. Miroslawa Lasota (Ekiert) is the girl far right in the sailors dress

The Puzieniewicze estate, owned by Countess Umiastowska, was situated near the town of Turzec by the 1812 Napoleonic Route - the Nowogrodek-Stolpce highway. In 1921 the Polish government bought the estate and the resulting land, parcelled out in 15-hectare plots, was granted cost-free to the soldiers who had volunteered to fight against the Bolsheviks in 1920.

These were the beginnings of osada Puzieniewicze. An open field overgrown with weeds, it consisted of 43 homesteads, not yet ready for cultivation due to the lack of buildings, implements, farm animals and water supply, for which the well had yet to be sunk. Where was the money going to come from for all this? The Co-operative Savings Bank – Kasa Stefczyka - helped and the government allotted 80 cubic metres of timber for the buildings plus money credits for each household. Gradually houses, barns, byres and pigsties dotted the horizon and horse-drawn ploughs appeared in the fields. The corn was sown and at last, the settlers joyfully celebrated their first harvest!

Meanwhile, demobilized soldiers had also been billeted in the neighbouring villages: Ladki, Pogorzetka, Bronosowo, Nowe Sioło and Wielka Słoboda. Soon marriages with local girls as well as those from western Poland were taking place in the osada and these villages. The young couples only in their early twenties had to quickly master all there was to know about spring and winter crops, vegetables, orchards, fertilizers and many other aspects of husbandry. Disasters came. Hailstones flattened and destroyed the cornfields nearing harvest, pigs fell victim to disease and pestilence and houses burnt down (those thatched roofs of ours!). Our house caught fire and my parents rescued me, then a babe in arms, from the burning building. When fire brought devastation to the area they, like all the other young families, just shook themselves off and started afresh.

Years passed. In Puzieniewicze, the osadnicy (settlers) formed partnerships and bought harvesters, threshing machines and other costly equipment. Two profitable butter and cheese-making co-operatives were also set up. The osadnicy did not find favour with the landed gentry who saw them as unwelcome competition. The rather poor Belorussian villages also envied the osada's growth.

Nevertheless, there were lighter moments in the life of the osada. During the visit of independence hero Marshal Józef Piłsudski to Nowogródek the osadnicy unharnessed his horses, hitching themselves to his carriage in their place. Then to the consternation of the assembled dignitaries and the joy of the great man himself, they hauled him to the Town Hall amid much singing and shouting.

In 1928 a 5-metre high wooden cross was erected bearing a plaque saying:

Unfortunately, the cross was destroyed in 1939 when the Soviet Army invaded Poland. In 1935 after the death of Marshal Józef Piłsudski some of the soil from under this cross was collected and sent by post to Sowiniec near Kraków, where a 100 metre high Memorial Mound was built out of the soil collected from all over Poland.

Along with the relative prosperity came children and families of five or six were commonplace. My parents were blessed with six children in quick succession and so, as the saying goes, one child couldn't lift the next ('jeden drugiego nie podniesie'). The school was a 2 km walk away in the village of Ladki, where a Russian field hospital operated during the First World War. A few graves remained and on All Souls' Day these were tidied up by the boys while the girls lit and placed candles on these last resting places, reciting the lament 'Where did your mother's eyes watchfully wait for you?' ('Kiedy, z ktorej strony oczekiwały Ciebie oczy Matki?')

We were surrounded by wildlife. Walking home from school one day I caught sight of two large animals running across the fields. Our neighbour spotting them grabbed his gun, jumped on his horse and galloped after them towards Serwecz, a tributary to the River Niemen. Suddenly I heard a gun-shot! It turned out that these were wild pigs which had their lairs in the Naliboki Forest. At any rate thanks to our neighbour we discovered that smoked wild pig ham was delicious! Sometimes on cold winter nights packs of wolves roamed close to our homes and we lost our dog Kruczek to them.  My parents owned two acres of marshy meadow called Nowizna near the river Niemen and we children helped (that's what we thought anyway!) with the haymaking during the summer months. The place was full of wild birds: ducks, herons, cranes and storks. In autumn the storks would flock together and rising upwards, fly away in formation carried by currents to spend the winter months in the sunnier climate of Africa. What an unforgettable sight! Beaver lodges were also in the area although their inhabitants were rarely sighted.

By the early 1930's through the combined efforts of the osadnicy a swietlica (community centre) was built. The focal point of our settlement it became the venue for dances, festivals, the nursery school, cooking and sewing classes run by Kolo Gospodyn Wiejskich (Village Housewives Association) and occasional Masses. The building also housed reading and radio rooms. With the help of the school teaching staff, an amateur theatre group was formed. In one play Placowka (The Outpost) I acted the part of a young boy who aided by his sister (played by Irenka Rutyna), penetrated enemy lines to deliver a very important message to the Polish Army units. The result: the enemy was routed and the Polish Regiments emerged triumphant. After the show, the young actors were treated at the bar to chocolates and the Polish soldiers, also at the bar, to something a little bit stronger.

Church holidays were always a time for fun. At Christmas the osadnicy dressed according to custom as Herod, a Jewish doctor, Death and the devil visited neighbouring houses humorously portraying Christmas scenes. After a few visits, due to the refreshments provided en route, they could neither perform nor walk! On Easter Monday as tradition dictated, males both young and old tried to catch their neighbours unawares and drench them with water. Not much fun if the day happened to be a frosty one!

One year a school trip to Wilno was organised and we lodged in a school building there. We visited the Rossa Cemetery and St Anna's Church, which we were told had been much admired by Napoleon. The excursion programme included a trip to the theatre staging, as luck would have it, The Glass Mountain, which we had performed some time previously. After seeing it we all agreed: "Our acting was better".

By the good offices of KOP (Korpus Ochrony Pogranicza) (the Border Protection Corps) an organization called Strzelczyk was formed. Based on the 'Strzelec' (Rifleman) a military organization fighting for Poland's freedom and independence in the First World War it trained boys (aged between 11 and 14) from the osadnicy families along Poland's eastern frontier in the art of shooting and skiing. We had drill and shooting instructors and the guardian of our squad was Mikołaj Szczesiuk. Parades, drills, night manoeuvres and skiing outings to the hills around Nowogrodek in the winter were the order of the day, always under the watchful eyes of our guardian. He trained us well. At the inter-school skiing competitions we were unbeatable. On 11th November, the Polish Day of Independence, dressed in our strzelec uniforms we took part in the parade. I felt very proud marching at the head of our squad and saluting my father - the Chief Officer of the Area - who was standing on the parade-stand along with the other dignitaries. We also took part in the march organized by the Liga Morska i Kolonialna (Maritime and Colonial League) shouting: "Ządamy kolonii!" (We demand colonies!) We had a weak voice that counted for nothing and nobody was in a great hurry to make us a present of a colony overseas!

In the summer of 1938 I availed myself of the squad leaders' training camp held at Racki Bor near the Latvian Border and Lake Drywiaty where the Polish Scouting Association also held their canoeing camps. During the day we had army drills, marches, lectures and swimming and at night-time we sang around the campfire. We used to sing The Frontiersmen's song:

'"The whisper of wind in the trees
And the forests of green carpets
Send this invitation from the heart:
Will you please come and enjoy
The delights of the Frontiersmen fairyland?"

This was KOP’s song. We had our own version:

In 1939 I passed the entrance exams for a place at grammar school and together with five others from Puzieniewicze studied at Stołpce and Nowogródek.

Then came the year 1939: Germany and then Russia invaded Poland. Father was arrested and deported to Russia. The following year Mother and the rest of our family were deported to the Siberian 'taiga'. In 1942 we were freed and allowed to leave Soviet Russia. My mother with my brothers Edward and Jurek and my sister Ala spent the war years in Tanganyika, East Africa; my sister Janina at the Cadet School for Girls in Palestine and my brother Witold at the Mechanics School for juniors in Tel-el-Kebir in Egypt. I took part in the Italian campaign with the Second Polish Armoured Brigade, Second Polish Corps.

In England, after the war, I married a Polish girl Wiesława Miller and we made our home in Leeds raising our children, Elżbieta, Barbara and Marek. Ala married Albin Frost and played volleyball for the local Lechia-Leeds team, winning the cup five times. Edward formed Edward's Reinforcements (Northern) Ltd which, between the years of 1977 and 1982 employed seventy steelworkers at the Sullom Voe Oil Terminal on the Shetland Islands. Albin and I helped to build this colossal project. It yielded the first oil ashore to Great Britain, the country of our settlement.

Long gone are the short years at osada Puzieniewicze.

​The photos below are donated by Marilyn Gwizdak Greenwood, author of "The Whistler".
The Gwizdak family and the Świercz family were close friends on Osada Puzieniewicze, they were deported together - their fathers were together in Ostashkow, both executed in Tver and buried in Miednoye (known as the Katyn Massacre).

Stanisław Świercz has also written an account of his family's experience of deportation from Osada Puzieniewicze. This can be read here.

His sister Alina Frost's recollections of the family's deportation and their time in exile can be read here.

Pelagia Stańczak Czarnecka has also written about her family's deportations from Puzieniewicze here.