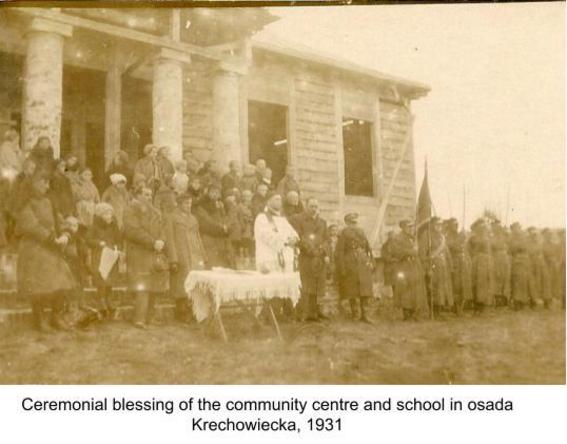 Such important events for the settlements as the laying of the foundation stone for the community centre and then the blessing of the completed building, the opening of a new school, the award of deeds of grant etc. were all celebrated together. Guests would also be invited to these functions - colleagues from home regiments, local government representatives and also the command of the nearest military unit. After the official part, there would be more or less lavish banquets prepared by the settler women, followed by singing and dancing until dawn. These former soldiers, despite their difficult lives, liked and knew how to have fun and enjoy life.

Military settlers were quite a closed, distinct social group connected through their military origins and endeavours in building a life in the settlements, convinced of their cultural and social mission in the Kresy borderlands, and deeply patriotic. The geographic isolation also contributed to this distinctiveness as the settlements were located at a distance of at least several kilometres from other villages or towns. Apart from that, the settlers, newcomers to Kresy, were at first reluctantly received by local communities, both Ukrainian and Belarussian as well as Polish, particularly the landed gentry. Quite a specific settler life emerged, which clearly also had its regional undertones depending on the level of wealth and even the natural conditions.

Starting out, the settlements were referred to as Hearths and were scattered and built on individual plots. The number of all military settlements approached 1,000, where the number of plots per settlement ranged from 2 to over 80. The names of the settlements were usually left the same as those of the parcelled off buildings, although the settlers sometimes gave them new names that were associated with the home regiment (e.g., Szwoleżerowo and Jazłowiecka) or with notable historical figures (e.g., Kościuszków and Piłsudy).

Settlement life, particularly in the first few years, was far from easy. Economic hardships were accompanied by safety issues as sabotage and bandit units - trained and armed in the Soviet Union - looted, terrorised, and murdered people in Kresy. There were night watches in many settlements to ensure the safety of the inhabitants. The attacks finally ceased once the Border Guard Corps were established in 1924, who effectively dismantled the gangs. Thus, the young settler families lived amidst constant apprehension and great discomfort, working hard to earn a decent enough living. Of great help and support to the settlers were their wives - the female settlers who not only took care of the children and homes but also helped in all kinds of work on the farmsteads. Above all, however, they had to show understanding for the ingenuity of their husbands - soldiers who through the years of war had grown unaccustomed to civilian and family life.

From the very beginning, the Settlers’ Union and agricultural organisations and local government institutions alike paid a lot of attention to the further training and education of the settlers in agriculture and social and self-government matters. All kinds of courses were organised in the settlements, often involving boarding; “Staszic” correspondence farming courses were particularly popular and encompassed farmers from the whole country. Social life in the settlement revolved around community centres. The main burden of the building costs were borne by the settlers themselves who not only paid a set contribution but also undertook a large part of the work on themselves, like the digging of foundations and the firing of bricks, etc. In 1937, there were 72 settler community centres throughout the Kresy, which back then was nevertheless considered insufficient because there was one community centre per 120 military settlers on average.23 The cost of building a small community centre was estimated at the time to be 20,000 złoty. In many cases, the Settlers’ Union came with financial assistance which amounted to around 10% of the overall costs of all the centres. Apart from that, the community centres usually housed primary schools and various economic and cultural organisations. Almost all of them had libraries, radio receivers, and facilities for social gatherings. Some also had choirs and theatre groups. Day-to-day life was enriched  by school plays, patriotic gala shows as well as summer picnics and other outdoor events including the equestrian shows by the Krakusi organisation, to which many settlers belonged.

The settlers participated in large national celebrations. They took part in the funeral of “the Marshall” [Ed. note: Józef Piłsudski, 1867-1935, the First Marshall of Poland (from 1920) served as the Chief of State and was considered the de facto leader of the Second Polish Republic.] at the internment of his heart in the Rossa Cemetery in Wilno, transporting earth from the military settlements to the Marshall’s Mound in Sowiniec [Ed. note:  The Józef Piłsudski Mound located in the Wolski Forest, Sowiniec, was constructed between 1934 and 1937]. On the anniversary of Piłsudski’s death, on 12 May, the settlers and their families would gather around fire pits in the evening in order to pay homage to his memory. Dignitaries visiting the eastern territories would not omit visiting the settlers. Piłsudski, President Mościcki, and the Minister of Agriculture Juliusz Poniatowski frequented the settlements.

Self-help was widespread in the settlements. Individual settlers undertaking larger  projects like building a house or farm outbuildings, received help from fellow colleagues in transportation of materials or in some other form. Some family celebrations like weddings, for instance, also drew the whole settlement. They shared their common joys and sorrows - just like one does in a family because each settlement was such a family... sometimes worked up about things but nevertheless warm and cordial.