My father, Antoni Kulik, born on 16 January 1894 near Częstochowa was a Senior Lancer of the 1st Krechowiecki Lancers Regiment. My mother, Stanisława (Chmielewska) Kulik, born in 1898, came from Szubków, Tuczyn Municipality. The village of Szubków was 6 km east of the Krechowiecka settlement. I was born on 26th June 1922, also in Szubków because there were no buildings on the plot of land that my father was allocated in 1921. At the beginning, my parents lived in my mother’s parents  house.

Some settlers had brought their wives from the towns they themselves came from. I knew one of which my parents talked. He brought his wife from Warsaw but when he brought her to the settlement and she saw the conditions, she ordered him to immediately take her to Równe so that she could go back to Warsaw. She didn’t even want to spend a single night at the settlement.

I will now write about the land plot of my father. When my father was released from the army, he only had his uniform on him, a rifle and the horse on which he went to battle. The plot of land he received as a military settler had an area of 27 acres, the soil was quite good.

The state authorities allocated some timber for construction of farm buildings but it wasn’t much, so that some settlers simply took construction wood from the nearby Koźlin or Szubków forests. They would go there at night, bring the logs back to the plots, and in the morning they would plough the field and laying the wood between the furrows and cover them with soil so that the police could not find them.

First, my father built a long building where at one end were the living quarters, that is, one large room. Next to it was the kitchen and hallway, further on, a pen for the pigs, chickens, a shed for the cows, and a stable for the horses. There was a thatched roof and the grain and hay etc. was kept in the attic. They dug the first water well next to it. It was quite deep but not very good because it constantly filled up with silt, the water wasn’t clean and the walls kept on subsiding. After a few years, on the advice of a local land expert, another well was dug which was not as deep but where there was an underground stream or spring and so there was ample crystal-clear water. There was a small pond not far from there. My father put up a fence around it that was plaited from osier growing in the nearby meadows through which a small stream run. In summer geese and even pigs were kept within this fence.

Almost every plot had some meadow for pasture and, from it, hay for the winter. The stream served as the boundary between plots; there was also clean water for the cows on the pasture. In later years, a drainage system for this stream was introduced and it was cleaned and deepened.

Sometime between 1927 and 1928 my father started to expand his farm. He set about building a new, separate house, stables and sties for the livestock, and a separate barn for the grain and hay, as well as a place to thresh the grain.  For straight straw needed to cover the roofs of the cattle sheds and stables, there was a threshing floor where the spelt was threshed with flails.

The roof over our new home was covered in galvanised sheet metal and the walls were made of wood, cut with hand saws into planks. I even remember how my father, with the help of his brother who lived with us on the farm for some time and helped out with various work, cut this wood into planks and boards. The logs were laid on tall wooden trestles and with a special long saw - one stood at the top and the other at the bottom - they were cut into planks or boards. When I was about four years old, I got under the feet of the one pulling the saw at the bottom, my father got cross and gave me a beating with his belt to stop me getting in their way.

At the beginning, times were very hard; mother not only had work in the home, baking bread, etc. she also had to help out on the farm, milk the cows, feed the pigs, chickens, and also work in the garden and help out with the harvest, for which scythes or sickles were used. In later years, they started to buy or lease mowers and threshers for the crops. In the winter period, mother would sew various things on her sewing machine and father made and repaired shoes for the whole family. Somewhere towards the end of 1928-29, we had a tragedy in the family: the whole family, except for me, fell ill with dysentery. Basically, our whole farm was under quarantine, only the doctor had access to us and a neighbour who looked after the livestock, and my grandmother - my mother’s mother - tended to the sick. Two of my sisters were so critically ill that my mother had already asked to buy some material for their burial clothing, but my sisters slowly got better, as did the rest of the family.

Our plot was 1 km east of the settlement Community Centre and school, and 1 km west of the Karłowszczyzna forest where, in 1937, they built a Catholic church. All the settlers enthusiastically brought materials for the construction of this church and even the neighbouring settlements helped out a little. Across the northern side of our plot ran the road (main route) between Równe and Tuczyn. In the beginning it was an ordinary road with potholes making it difficult to ride along even with an ordinary cart and horses, especially in autumn and spring when the snow was melting. The community authorities imposed certain taxes on the settlers, known as “szarwarka” everyone was required to carry out a certain number of days [of work] with a cart and horse within the municipality. Using this system, stone was transported- granite from the quarries - and the authorities built a good road. Then bus communication was opened between Równe and Tuczyn. This made it easier to get from the settlement to these towns.

On the left, there was the Armatys plot, who remained in the army as a regular soldier. At the beginning, Wincenty Cała leased his plot, then it was taken over by a German - Emil - I can’t remember his surname. Stanislaw Wojna lived on the right side and there was Kulikowski, Jakubowski and Kwaśniewski’s plot on the other side. When he died, his wife later married Frączak.

The first school was opened at our neighbour’s (one plot down from us), Karol Kałusiewicz, in one room. There were five or six pupils there. I too was meant to start my education there but a new school was opened in 1930 in the community centre, and that is where I went. The Headmistress of the school was Maria Klossówna. That was where, in June of 1937, I completed six classes of comprehensive school.

I remember the blessing of the cornerstone of the community centre. This was in 1929. The President of the Republic of Poland, Ignacy Mościcki, came for this event. I was with my father. He lifted me up high so that I could see the President. Many people came for the occasion, even from neighbouring settlements. At the entrance to the Krechowiecka settlement, from the Równe side, a special reception gate was built for the President, which remained there for a long time. At school, I also belonged to the Scouts; we went on school outings to Równe, but I can’t remember for what occasions. In 1934, there was a trip for the children of the Krechowiecka settlement to the barracks of the 1st Krechowiecki Lancers Regiment, fathers’ family regiment in Augustów. We were invited there for a week by the officers of the regiment, which included visiting the beautiful Augustów lakes. Several children developed scarlet fever there, with serious consequences.

After finishing the comprehensive school, my parents personally looked for a school for me where I could learn some kind of profession. My younger brother, Bogdan, was meant to take over the farm from my father. These were the proposals: the technical vocational school in Zdołbunów or the State Ammunition Factory in Warsaw, but without the support of the Military Settlers’ Union I wouldn’t be able to live in the Boarding House of the Settlers’ Union in Warsaw. In the meantime, the Settlers’ Union was opening a General Trade School in Poznań to train young people (children of settlers) so that they could return to the Eastern Borderlands after receiving training in various occupations, thereby helping with the development and industrialisation of those lands. It is precisely in this school in Poznań where, with the backing of the Settlers’ Union, I began my metalworking apprenticeship in December 1937, which unfortunately I did not complete because of the outbreak of war on 1st September 1939. During my stay in Poznań - our boarding house (the “Hearth”) [Ed. note: “Ognisko” in Polish] took part in two youth conventions of musical groups, similar “Hearths”; the first was in June 1938 in Brest on the River Bug, and the second in 1939 in Grodno.

My father had already settled in a bit on the plot, he had two-three horses for working the fields, transport to the market in town and fetching timber from the woods in winter for use as firewood to heat the house. He kept three-four milk cows, setting the milk aside for the settlers’ dairy next to our community centre. Once the cream was skimmed off for butter, the milk was taken home for our own use, to make cheeses, or to feed the pigs, which we reared - around eight of them. We also raised two or three dozen chickens and geese, and sometimes about a dozen turkeys. There always was a vegetable garden close to the buildings. The main sowings in the fields were rye, wheat, barley, oats, rapeseed, buckwheat, clover, and millet. Sugar beets and parsnips were planted in the field to feed the cattle. There also was a tobacco plantation. In the vegetable garden, there were tomatoes, cucumbers, lettuce, beetroot, pumpkins, sunflowers, poppies, dill, parsley, cabbage, red and white carrots to feed the livestock, and hemp from which ropes and cords were made. Flowers grew around the house. We also raised rabbits. There were always two dogs and a pair of cats.

In the winter period, my father always made willow wicker baskets which were practical when sowing and harvesting potatoes or eggs and for various vegetables on the farm.

After war broke out, I returned to the settlement from Poznań towards the end of September 1939. In November, the local board of Ukrainian Militia ordered us to leave the plot, the whole farm, which was taken over by a Ukrainian from Koźlin (neighbouring village). Our whole family moved to Szubków, to my mother’s family. From there, on 10 February 1940, we were deported to Northern Russia, near Kotłas.

My siblings and I now live in England.​

​The blessing two homes and school in Osada Krechowiecka 1931 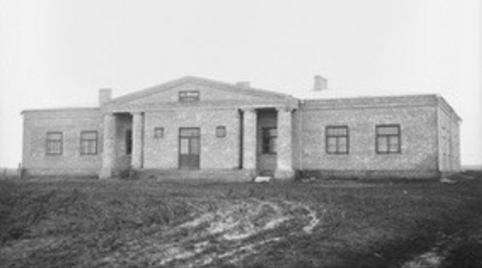 Gateway to the Osada with Wiesieleński farm in the background 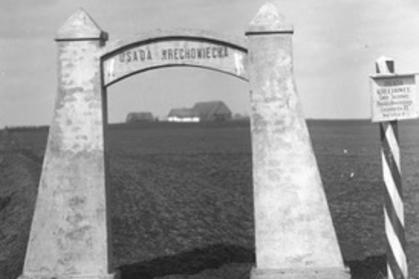 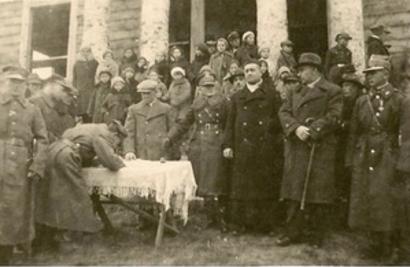