I dedicate this to the memory of my parents, Stanisław Pukacz and Katarzyna (née Rzonca), the nearest neighbours and all settlers from Osada Krechowiecka (the Krechowiecka settlement).
Czesław J Pukacz

It is not an easy task, at least not for me, because half a century has elapsed, to remember all the details related to those years, the years of my childhood. But, even from those which I have retained in my memory, I could easily write a long and extensive book. Nevertheless, these few sentences, at the request of editors whose task of producing and publishing a collective work of recollections about our settlements in Kresy, the Eastern Borderlands of Poland, will be just one small part of this work.

Unfortunately, WW II destroyed the efforts of these 18 years; everything was taken away from them; all their possessions and accomplishments were destroyed; the majority of them with their families were deported to Siberia, with half an hour’s notice for packing, not even being allowed to take the most necessary items with them. Today, not many of them are alive. We are still alive, we, their descendants, whose childhood and youth were spent on the settlements. Today, in a humble way, we want to reach the memories of those young years when we watched our parents, in their work, full of dedication and enthusiasm, with thoughts of our future and of building Poland on the Eastern Borderlands.

Although, as I have already mentioned, they lost everything, all their property, their efforts were not in vain. They left us a marvellous example of work ethic in order to achieve in life; they rooted in us a love for our home country; they brought us up as productive people and, for this, we are forever grateful.

For over eight years we have been meeting up in Fenton and in London, we, their descendants, in order to celebrate together that, despite being dispersed all over the world, we continue to recall with fondness the old times. We recall our parents with gratitude, we pray for those whom God has called to Himself for their eternal reward for their efforts and dedication.

And now for a few words about my parents, my siblings, my relations and the closest neighbours, our holding and farmstead.

Our father was born on 8 August 1889 in Radomsk. After finishing business school, he was called to the Russian army. His service took place in the Caucasus. In the year 1915, probably as a volunteer, he joined the 1st Cavalry Regiment under the command of Colonel Bolesław Mościcki. After the victory at the battle of Krechowce, this regiment became known as the 1st Cavalry Regiment Krechowiecki.

Father served in the regiment until 1921 as an assistant surgeon, at the rank of a sergeant. In that year, together with two officers and 80 NCOs, as a reward for loyal service, he received a piece of land of 12 hectares on the Osada Krechowiecka. This farmstead, on which was built a large artillery range, was a part of the polygon for the training of Russian artillery. The land had not been tilled for many years; it was covered with tall weeds; in any case, just as other farmsteads on the settlement. There were no buildings on any of them, just bare fields. Just as I have mentioned, everyone had to dig out a huge pit and build an earthen-hut before they were able to build homes and farm outbuildings.

Our plot bordered that of Piotr Swojnóg in the North side across the road; from the South with that of Władysław Wołkowski, from the East with that of Aleksander Międza, whilst on the West with that of Stanisław Boryń and Wincenty Rzońca, whose sister Katarzyna from Kieleck our father married. Apart from our parents, in the earthen-hut lived Wincenty Piskorski with his wife Józefa (née Budkiewicz), who was my godmother. I was born in the earthen-hut in July 1924. Our house was then being built. Two years after me my sister, Stanisława, was born in April 1926. After a further two years, a second sister, Władysława, was born in June 1928. After her, came Apolonia, on 3 August 1930. Then in April 1932 our brother, Ryszard, was born. After him, on 10 February 1934, came Leon. In February 1936 Leokadia was born but died at six months. In May 1938, Helena was born who also died after three months. We were six siblings left. Today, Stanisława, Władysława and Leon are alive. Pola died in Huddersfield on 4 April 1987; Ryszard in October 1941 in Russia on the way from Siberia to the south, in Czelabińsk . Our parents have also deceased. Father died from typhoid in Russia and our mother in England 12 years ago.

My route to school on foot took me through 11/2km of the so-called Bezodnia. Bezodnia was a marshy expanse covered with osier and wicker, accessible both in the Summer and the Winter. In the Autumn and the Spring, it was flooded. Then we had to take a circular route to school of about 3km. In school, we had a library, a shop with educational equipment and a sports field. We also had two scouting/guiding groups, boys and girls, as well as a cub group. The troops numbered around 50 each. The scout master was Władysław Koruslewicz, an educator and a form teacher. I belonged to the scouts from the age of ten and, somehow or other, I am still involved with the scouts.

After the building of the settlement church in the Karlowszczyzna wilderness, I became an altar server. Our group numbered approximately 40 boys. From the beginning, I was a chronicler, but towards the end I was the secretary. Our Parish Priest was Father Kąkol, a wonderful priest who, apart from his parish responsibilities, was a catechist in our school and also in the Hallerowo settlement. I have never stopped being an altar server but two years ago, after three years of theological study, I was ordained a permanent deacon.

My life up to about the age of ten was without a care. Life was serene. At home, we lived an affluent life; we had the help of a manservant and a maid. Then, once the family began to grow, mother’s health deteriorated. Serious operations, one after the other, put a strain on our income. Father was forced to sell some of the livestock, and he took on a loan. We had to release our servants, firstly the manservant, and then the maid. We had to restrict ourselves to the occasional help from Ukrainians from Koźlin, on the land, with the harvest, with the tending to the sugarbeet and the tobacco. These were difficult years because, after school, I had to help with work in the fields and at home, pull out of scout excursions, camps and camping. Only in the winter, when there was no work in the land, was I able to go ski-ing and on scout trips.

Our land was 10 hectares of cultivated farmland and two hectares of meadow. The black soil was suitable for growing sugar beet and wheat, but we also produced tobacco, hay, rye, oats, clover, buckwheat, barley and even millet. We grew potatoes, pasture beetroot for the cattle, cabbage and other vegetables. We also had an orchard, but it was young with apples in the main. Our livestock comprised a pair of horses, one three-year old foal, two milking cows, a heifer, several pigs and some chickens. This was our livestock at the time of our deportation to Siberia.

Our parents, apart from the jobs on the farmstead, took part in many social tasks on the settlement; father, in the co-operative and agricultural tasks and mother, in the Farmers’ wives’ circle. They arranged social events, such as dances, Thursday gatherings when hostesses served up delicious cakes, coffee and tea. The senior student classes from time to time went on trips to neighbouring schools to Hallerowo, the Jazlowiecka and Bajonówka settlements for social gatherings.

Many settlers built for themselves new homes, the old wooden ones were replaced with brick. In Równe, they built a settlers’ middle school and a school dormitory, and already over 20 children from our settlement attended there. The population of our settlement grew each year; it became better equipped, fields were beautifully tended; there were many orchards; there was a lot of greenery; the livestock was pure-bred. In short, it was very difficult to believe that all of this was created in these 18 years; so often during our meetings in Fenton or London we ask ourselves the question how would our settlement have looked if not for this cruel war? We can laughingly surmise that without doubt a great deal more beautiful and rich. It would have been a settlement flowing with milk and honey. Today nothing remains, not even one house [1] has survived nor one tree. Everything was destroyed, so that no trace of us was left. There is no church [2], there is no Osada Krechowiecka Community Hall, in Karlowszczyzna there is not even one oak; everything cut down to the root. And the whirlwind of the war has scattered us all over the whole world - our family in England, our extended family Rzońców in Poland on recovered territory in western Poland. Our neighbours, Boryń, Swojnóg and Miedza are also there.

All that remains are the memories of these long past years, the years of hard toil of our parents, the years of our beautiful, carefree youth. And it would seem it wasn’t so long ago.


footnotes
[1]         Danuta Gradosielskawho also lived on the Osada Krechowiecka has visited the osada twice, in 1995 and 2005. Her house is the only one which has survived, together with the fruit trees. She has a photo of the house from 1991.
[2]         Danuta Gradosielska who visited the Osada in 1995 and 2005 confirms that a pig farm has been built on the site of the church.

It is good that we, children of settlers in Kresy, have decided, albeit very belatedly, to record our recollections in order to ensure that our parents’ accomplishments are not in vain: 18 years of hard and arduous labour which produced such wonderful results, labour in setting up farmsteads, which they began literally from digging into the soil because they found bare, weed-infested fields without any buildings whatsoever, digging for themselves so-called earthen-huts in order to have a roof over their heads from the very beginning before they managed to build themselves a house and farm outbuildings.

To begin with, it was a three-class school and later a seven-class school. The school was attended by more than 200 children. The Headteacher for the whole duration was Miss Maria Klossówna, very popular and highly-regarded for her total dedication to the education of children, who raised our school to a high standard. 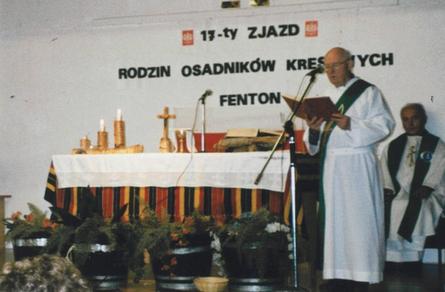 Headmistress Maria Klossówna on the left 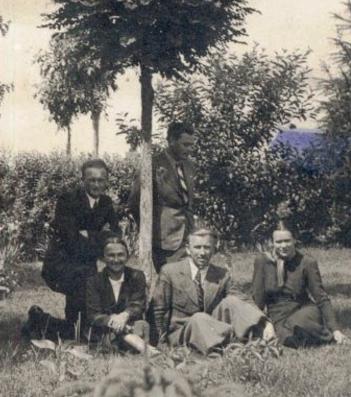 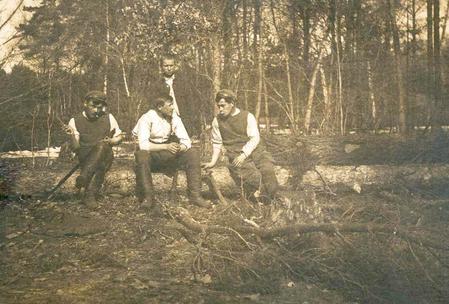 at the 17th gathering of families from the settlements of Kresy