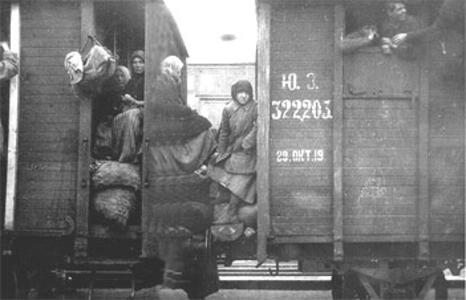 This journey took our mother and her siblings via Novosibirsk and Semipałatyńsk, through Tashkent and Samarkand to Guzar in Uzbekistan. It took them through all climates: from freezing weather and icy winds in Siberia, to baking heat in Tashkent where dysentery, typhus and scarlet fever became rampant. Communal graves in Uzbekistan could not keep up with the numbers who were dying.

At last - on the road to freedom!

The flicker of light which news of the ‘amnesty’ gave them was not without its moments of darkness and doubt as the older Lichwa children debated what they should do. They were afraid of the long and unknown journey but Mr & Mrs Cichocki insisted that they should not stay in Siberia and encouraged them to undertake the journey to freedom together.

To get to the nearest pick-up station from their kolkhoz, Michał constructed a wheelbarrow for his two youngest sisters to sit in whilst he pushed the wheelbarrow, and Kasia, Bronia and Marysia walked.

On the way, families would often break the journey and stop to work for the local Russians. This was usually field work and they would work for as long as they needed to in order to procure some food, generally bread and milk, to see them through the next stretch of the journey. Our mother and Haneczka during one such stop were left with a Russian widow whilst their siblings went out to the fields to work and, whilst they were with this widow, they stood petrified in the window waiting all day and frightened that their siblings would not come back. This widow took a liking to their brother Michał and tried to dissuade him from continuing with the journey. She tried to encourage him to stay to set up home with her. Some may have agreed to do so as in some ways life in Siberia had become familiar, whereas journeying to an unknown was daunting, but for Michał, there was no decision to be made and the Lichwa family continued the journey together.

General Anders believed that, if the civilians did not leave at the same time as the newly-formed army, their fate would be sealed, and that they would remain destitute in the USSR. He was particularly concerned about the orphans, of which there were over 100,000, many of whom were dying of infectious diseases, hunger and the stress of orphanhood, and by June 1942 the Polish authorities had gathered over 77,000 lost children and orphans and began to evacuate them from Guzar.

Our mother and Haneczka were with this group of orphans. Kasia had found it increasingly difficult to look after her two youngest siblings. The hunger they had been subjected to in Tashkent in Uzbekistan before being taken into the orphanage was insufferable, and both of them were suffering from typhus. One particular day Kasia was beside herself with despair as both girls lay motionless on their straw beds. She went out to get a pail of water to boil for them. Whilst she was out, she saw a local Uzbek out with his sheep. One sheep was limping and the Uzbek hit it on the head and killed it and told Kasia to take it home to cook for her family, which she did. Once this was eaten they were back in the same dire situation again.

On another occasion, Kasia and Marysia walked past a local Uzbek woman’s home and noticed that she was frying some ‘lepioszki’, pancakes. Marysia climbed up the Uzbek woman’s ‘morwa’ tree, a mulberry bush and began shaking it whilst Kasia caught and collected the fruit. The Uzbek woman came running out, shouting at Marysia to get down and, whilst she was shouting at Marysia, Kasia sneaked into her house and stole the pancakes.

The typhus grew worse; the two youngest were covered in red patches and they had lost their hearing too. Kasia was advised by another local Uzbek to take them to the hospital but she was reluctant to do this because very few, once hospitalised, were actually ever discharged and Kasia was afraid that the two little ones would die in the hospital. Kasia decided that, in order to improve their chances of survival, she would have to hand over the two youngest to the orphanage. They were both so ill that Michał carried our mother whilst Kasia carried Haneczka to the orphanage. The orphanage had been set up by two men: a Pan Zajer who knew the Lichwa family from the Posiolek and his friend. Both our mother and her youngest sister, Haneczka, were also by this time suffering from whooping cough, which is a very contagious disease.

Kasia went to one of the directors of the orphanage, not Pan Zajer but to his friend, and stood in front of him, sobbing her heart out. She had warned the girls not to cough in front of him but Haneczka suffered a bout of coughing. He refused to take them in because he had the welfare of the other orphans to consider. Kasia threatened to dump them outside his building. However, Pan Zajer took pity on the orphans, mellowed at the plight of the girls, relented and took them in under his wing. Once in the orphanage, they were kept in an isolated room until they improved. Kasia would visit them and bring them ‘placki z pokrzywy’, nettle latkes, wrapped in a towel, which they would devour ravenously. Pan Zajer was very fond of the family and, in order to help Kasia out a little, offered her a couple of small jobs; he engaged her to do his laundry and to keep the swietlica (a kind of meeting room) and the kitchen clean.

It was with this orphanage that our mother with her youngest sister, Haneczka, finally left Uzbekistan, under the protection of the Polish Army.

Her older sister, Kasia and Bronia, also left Uzbekistan but with the civilians, again under the protection of the Polish Army, and not with the orphanage.

After more than eighteen months of inhumane and inhuman existence rife with starvation, hunger, disease, physical pain and mental torture, the orphans  finally left their 'paradise' to continue their travels to unknown lands and new experiences.