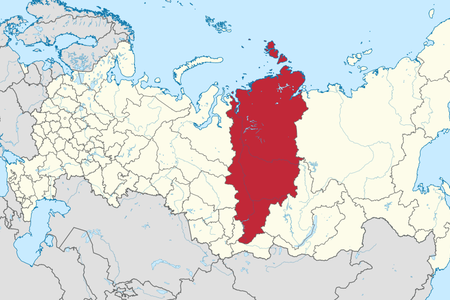 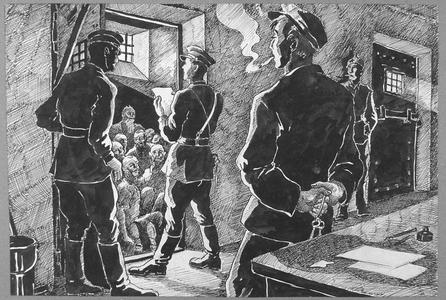 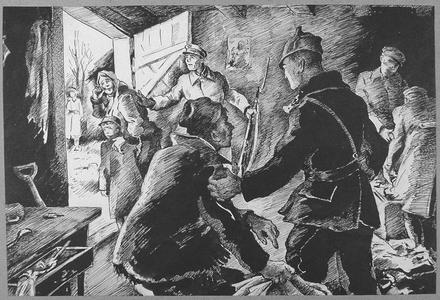 The address of their posiołek was: 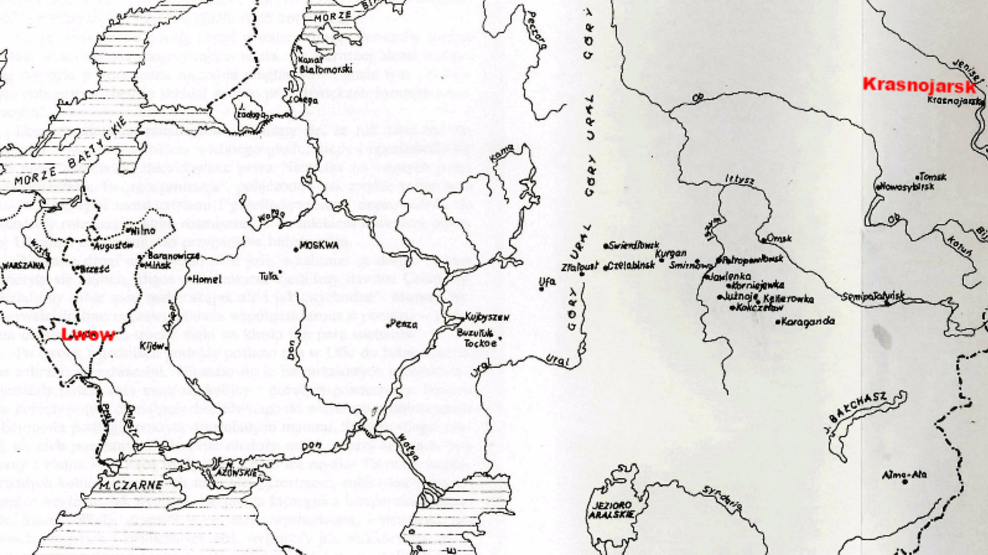 After a wait of three hours at the station, everyone was ordered to get into a cattle wagon. There were about four wagons in all. Each wagon was crammed with at least 40 people. They sat together with their neighbours, the Cichocki family. Mr and Mrs Cichocki had seven children, Kasia, Geniek, Tadzio, Karolcio, Miecio and Bronek. Kasia Cichocka was three years older than our mother and often described how our mother had taught her to dance. Our mother herself would recall how, when in Poland, her ‘ciotki’ (aunts) would hold great parties and how she would love dancing at these.

The family is ordered to get into the cattle wagon.

It was not long before people, particularly the old and the very young, became very ill. Some died, but there was no time for burials and no time to mourn. Occasionally, the train would stop. Large cauldrons of ‘kipyatok’ (boiling water) would be distributed, but little else. On the rare occasion, each wagon would be given a bucket of cabbage soup with bits of potato and other unrecognisable objects floating in it. An empty stomach and a dry mouth, hunger and thirst were constant companions.

The journey lasted about four weeks. The speed of the cattle wagon varied. Every so often it would stop on a siding to give way to other goods and passenger trains. The siding was always in an empty field, with not a soul to be seen.

Our mother's enforced inhumane and inhuman trek from her home town near Lwow to Krasnojarski Kraj.

(We will never forget the 10th February,
the day when the Soviets arrived whilst we were sleeping
and sent our children to Siberia) 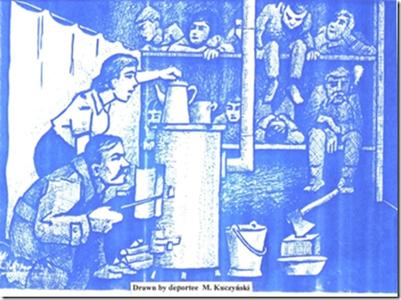 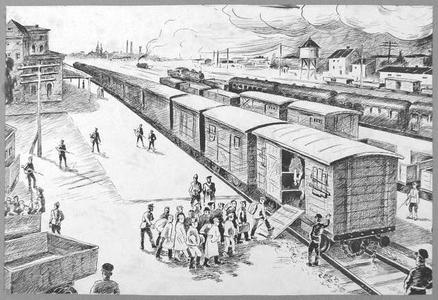 The NKVD read the official order of the deportation.

They packed clothes and food and as much as they could gather in the allotted time and bundled it onto a sleigh. Haneczka, the youngest and not quite four years old, together with our mother, was placed amongst the parcels and bags. The others walked through the snow to the station.

It was all understandably very confusing. Where were they going? How long would they be away?

Daily life in the cattle wagon on their journey to 'Paradise'.

The NKVD throw the Poles out of their homes.

The loud banging on the door at 02.00 in the morning of the  night of 9-10 February 1940 when the family was sound asleep brought disastrous consequences. Our mother's  home was suddenly surrounded by Soviet soldiers. Five Soviets rushed into the house with rifles drawn. They gathered our mother’s family into one room, her father, her mother, her brother Michał and three of her four sisters, Kasia, Marysia and Haneczka. Bronia was not at home as she had gone to visit her aunts, her mother’s sisters, who still lived in Łanowice, where our mother and all of her siblings had been born.

Michał was determined not to leave behind their beautiful black and white dog called ‘Kora’ and sat him on the sleigh, but one of the Soviets pulled the dog off and threw him to the ground. Kora howled loudly and it was only as the distance between them and their house increased that the howling become fainter. It was heart-rending.

It was bitterly cold in the cattle wagon although there was a small iron stove. They stood at the station for two days. There was no sanitation. A hole in the floor of the cattle wagon, screened by a blanket, served as the lavatory. Friends and family who got to hear that they had been taken from their home under guard brought them food, but it was difficult to hand it over to them.

After about two days’ unexplained waiting at the station, the cattle wagons moved off, and so began the Soviet ethnic cleansing campaign.

In the wagon in which our mother and her family travelled, was a young mother with two very young children, one only a small baby, and during the journey Kasia would often help by changing the baby and by rocking it to sleep. The journey took them north east in the direction of Siberia. They travelled past Kiev and Kuybyshev until in early March the cattle wagon finally stopped at the Uzhur railway station in Krasnoyarsk.

From there, they had to make their way on foot to a remote settlement (‘posiołek’), or kolkhoz, i.e. a Soviet collective farm, where they lived in barracks and slept on plank beds. They shared their barrack with the Cichocki family, their neighbours from Zmysłów.