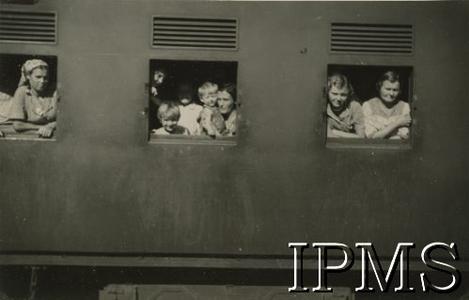 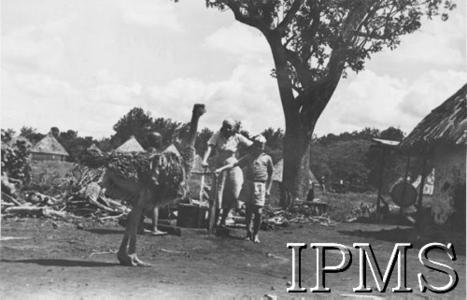 There were about 5,000 Poles in Tengeru. They organised schools, girl guides and boy scouts, and a hospital. They built a church and a cemetery. They farmed and did so successfully.  The Polish colonies were almost self-sufficient. Even the Masai came to them for milk. Whilst the Poles were not encouraged to mingle with the natives, the Masai were a particularly friendly people, and our mother did learn some words in Swahili and even a dance. It was in Africa that the two youngest sisters both learned to sew and they became wonderful seamstresses. Our mother frequently spoke about swimming in Lake Duluti.

Typical African huts in the background.

A group of  young people

from the orphanage during an excursion. 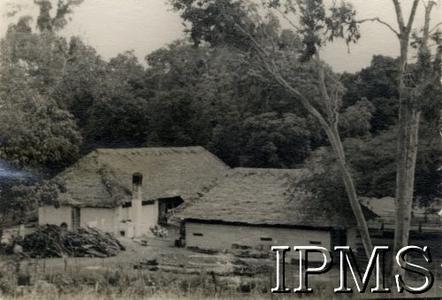 A photo of Haneczka in Camp Tengeru, sent to her sister Marysia on 2 June.

The largest group of Polish children went to Africa, to what was then known as Tanganyika, and in the end our mother, Haneczka and Kasia were in this group.

But even this had not been straightforward for the orphans:

Kasia at first found herself in Rhodesia having been separated from her siblings earlier on when she tried to rescue her sister Bronia from the hospital in Tashkent. Eventually, not long before they were to leave Africa for England, she joined our mother and Haneczka in Camp Tengeru.

Unbeknown to Kasia, our mother had been allocated India, but her sister, Haneczka had been allocated Africa because she was too ill to travel to India. Why? We do not know. Whether the journey to Africa was easier; whether the conditions in Africa were better; whether the boat leaving for Africa was due to leave later giving her more time to recover – we shall never know. What we do know is that our mother flatly refused to be separated from her sister. Our mother would not entertain the idea of being separated from her youngest sister, Haneczka, who would have been totally on her own, and without any family. So, our mother refused to leave Haneczka. The authorities finally relented and agreed to her going to Africa with Haneczka, to Camp Tengeru.

The journey from Ahvaz to Africa was by sea through the Persian Gulf. On the way they stopped in the Indian port of Karachi, where Haneczka made her first Holy Communion and where they were transferred to a much larger ship which then continued the route across the Arabian Sea and Indian Ocean to the port of Tanga in East Africa.

In the port of Tanga, they transferred to a smaller ship and sailed along the coastline to Dar es Salam where they were divided into two groups: one headed for Rhodesia and the other sailed north to Mombasa in Kenya. From Mombasa they journeyed by train to the main railway station of Moshi in former Tanganyika, currently known as Tanzania and from there by lorry to Camp Tengeru with Mt Kilimanjaro in the background.

The orphans were greatly taken by the jungle, the tropical orchards weighed down by the mangoes, the papayas and the clusters of coconuts and bananas. Mrs Cichocka, who had lost Tadzio, Karolcio and Miecio during the war in Siberia, used to serve cocoa in the kitchens in Camp Tengeru and would always encourage our mother and Haneczka to drink their portions quickly and to get back in the queue for more, but they never did. The soup was always thickest at the very bottom of the cauldron, so everyone was keen to be last in the queue. One disadvantage was that the bottom layer also contained the stones that came with the water which they took from the local river to make the soup with.

He arrived at the orphanage one December and said that he would like to have some children to spend Christmas with him and his family. He asked to see the roll call, recognised the Lichwa surname from when their families were neighbours in Poland, and selected them (ie our mother and Haneczka).

When Kasia finally joined her sisters at Camp Tengeru, she worked as a member of staff at the camp and was provided with a very small house of her own.  Our mother and Haneczka left the orphanage and went to live with her in the house but took part in all the activities and events organised by the orphanage.

During the years in Camp Tengeru, the children in the orphanage received their clothes from the USA via the Red Cross. The three sisters: our mother, Haneczka and Kasia also received news from Marysia from Jerusalem, together with photos of her in her air force uniform. Michał wrote to them from England once he arrived in Milton Haven.

It was not until 1948 that asylum was finally obtained for the orphans to relocate as displaced people to somewhere in the free world and our mother, Kasia and Haneczka, having no home to return to, were eventually reunited through the Red Cross with Marysia and Michał who had arrived in Great Britain with the forces.

The last stage of their enforced travels took place in 1948 when they headed for Great Britain.

Camp Tengeru lay between Arusha and Moshi. It housed the largest orphanage and this was where the two youngest stayed initially with Haneczka until Kasia joined them from Rhodesia in South Africa. The orphanage was very strict although fair and kind. On one occasion, our mother had gone out with her best friend, Kazia Samek, and they returned late.  The punishment was to scrub the wooden tables clean with glass. 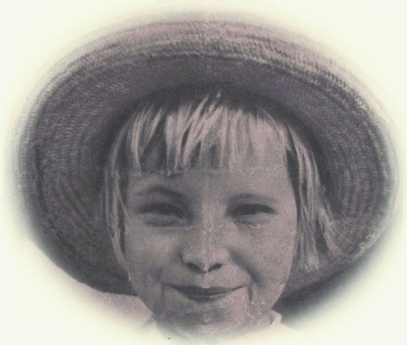 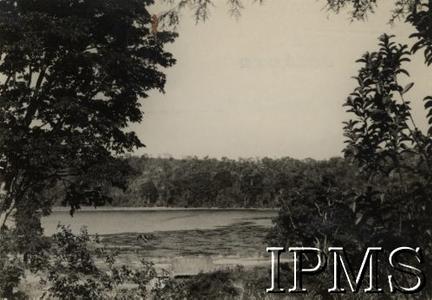 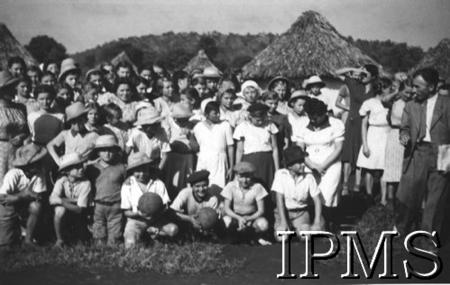 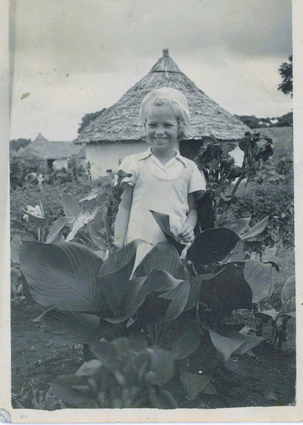 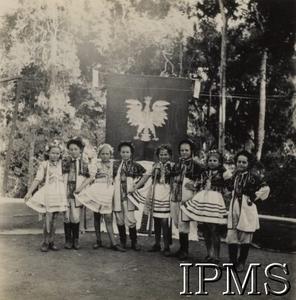 Our father’s father, our ‘dziadzio’ (who coincidentally was also in Tengeru with his wife and daughter, our father’s sister) worked as a policeman whilst in Tengeru.

At the port of Mombasa, they transferred to a train to the main railway station of Moshi, where they boarded a lorry to Camp Tengeru. 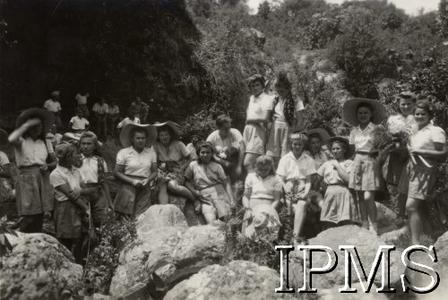 A photo of our mother and her youngest sister, Haneczka,

in Camp Tengeru, just before leaving Africa for England.

Our mother is on the very left.

Haneczka is in the front on the right.