Together with the orphanage and under the protection of the Polish Army, our mother and Haneczka made their way via Krasnovodsk, a Soviet port on the Caspian Sea, to the Persian port of Pahlevi (Anzali). Kasia and Bronia travelled with the civilians.

However, Bronia was now very seriously ill and was taken into hospital suffering from dysentery. Kasia was afraid of missing the boat and tried to get her discharged but the hospital would not agree to release Bronia. Kasia was in despair and made her way out of the hospital in floods of tears. She met a Jewish man who asked her why she was crying and when she explained, he took her back to the hospital, made such a fuss with the authorities that they released Bronia. Unfortunately, Kasia and Bronia were too late for the boat that took their youngest siblings to Pahlevi. They travelled later. 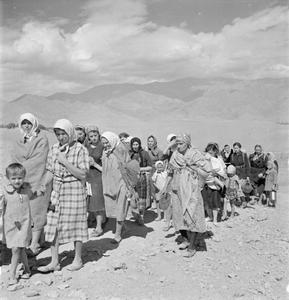 Once in Pahlevi, the two youngest remained in the orphanage and lived in tents.

Sadly, for Bronia it was all too much and she died from dysentery in Pahlevi.

Again, we have another sad story: one day, as  our mother and Haneczka were out walking with the orphans, they heard someone calling out to them. It was Bronia who promised to come over to the orphanage later on that day. She promised to bring with her a ‘kawon‘, a large juicy melon. But she never arrived. They learned later that she had died that same day. Mrs Cichocka told them that she had seen Bronia earlier in the day at the river’s edge doing her laundry. Her laundry had been bespattered with blood. 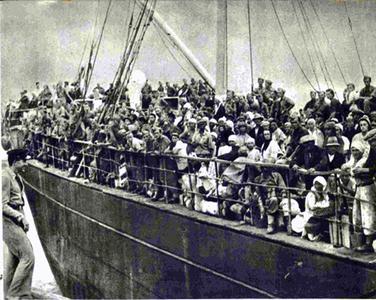 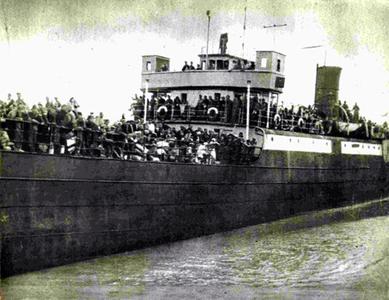 The vessel sails into the port at Pahlevi. 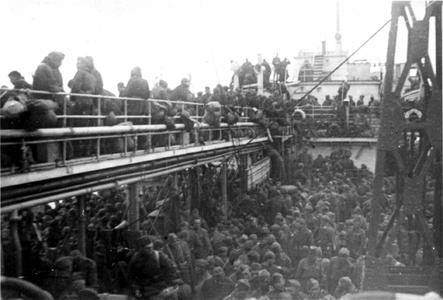 an atmosphere that was

Desperate to board the vessel in Krasnovodsk.

The despair and relief to get out are evident.

The journey on the boat was not without mishap. Our mother had the runs and would have to wait in a long queue to go to the toilet. No sooner did she finish in the toilet, she would have to return to join the queue again, so bad was the dysentery. The Lichwa children finally arrived in Pahlevi at some stage between 10 August and 1 September 1942.

Many did not survive the journey due to

distress, defencelessness, deprivation and disease from their experiences in USSR.

Our mother herself spent a month in hospital because she was suffering from diphtheria. As she walked into the hospital she witnessed other children and patients simply keeling over and dying in front of her very own eyes. It was very frightening and distressing.

In Pahlevi the orphans were inoculated and given a proper diet. From the Pahlevi orphanage our mother and Haneczka were then transported to Tehran in Persia in trucks along awkward twisted roads with breathtaking views to Qazvin, where they were put up for the night on school floors, before continuing their journey next morning to the capital. Our mother would recall this journey in trucks very clearly because a lot of the time they drove along the cliff’s edge and the steep view down was frightening.  After a short stay in Tehran, they journeyed to Ahvaz in the South of Persia from where they were then transported to Africa, one of the various new places of refuge for the Polish deportees ... but, even arranging this was not without controversary...