From there, we travelled to a transit camp in Daglingworth near Cirencester, and that is where father came to pick us up and take us to the Springhill Hostel. In time we were reunited with my brothers and sister. 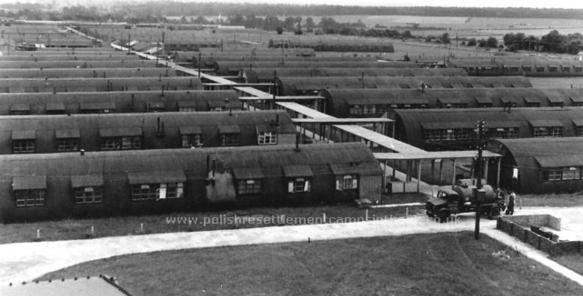 Life after the war

The war ended in l945 and, as all Polish Armed Forces on the Western Front fought under the auspices of the British Government, they were brought to the UK and accommodated in temporary camps all over England, Scotland and Wales. My father, together with a number of other soldiers, was directed to a German prisoner-of-war camp outside Broadway in the Cotswolds, called Springhill Hostel. But it was not until April 1948 that mother and I were reunited with father after almost eight years of separation. On leaving our camp near Masindi, Uganda, we were taken by coaches to Kampala, from whence we travelled by train to Nairobi (having slept on the platform awaiting a morning train), then on to Mombasa where we boarded a ship called “Caernarvon Castle” and, via the Indian ocean, the Red Sea, Suez Canal, the Mediterranean and the Atlantic, we docked at Southampton on 8 April 1948.

In time, the Armed Forces were demobilized - father ending up with £30 in his pocket and the clothes he stood in. He quickly found work on a nearby farm, being himself a farmer in Poland, and mother started work in a local fruit-processing factory. I went back to school, a Polish boarding school, under the auspices of the Department of Education outside Cheltenham. After the Polish school, I took up a secretarial course at a Cheltenham College. I lodged in Cheltenham during the week and spent week-ends with my parents at Springhill Hostel.

Father and mother debated for a long time where to settle permanently. We could not go back to Poland which had become a satellite of the Soviet Union (as Russia was now known) and a communist regime was established in our country. The regime regarded those who fought with the Allies as enemies of the State (at Moscow’s bidding), and so those who returned, almost all were arrested and deported back to the Soviet Union again. My father hated communism as much as Nazism and could not contemplate going back under those circumstances. Besides, the eastern part of Poland where we had come from was ceded to the Soviet Union by the three powers, i.e. United States (Roosevelt), Great Britain (Churchill), and the Soviet Union (Stalin), without any consultation with the Polish Government-in-Exile. (Stalin insisted that Polish servicemen were not to be invited to take part in the first Victory Parade to which the then Prime Minister of the UK, C Attlee shamelessly and meakly agreed). So in time we bought houses and settled in the UK. In l952, I met Jan Kalicki (yes, at a dance) and we married on 27 June l953. His history is very much like mine, except that his family was sent to Archangel in the arctic circle where they were made to work in forests felling trees waist-deep in the snow.

To conclude, therefore, those of us who survived the Russian gulags can truly say that we have been to hell and back. In truth, most of the time we were walking dead. I was too young (not quite five years old at the time of our arrest) to comprehend the enormity of it all, the inhuman conditions under which we lived, the starvation, malnutrition, diseases, unbelievable hygienic conditions, the utter despair of my parents who did not know where the next piece of bread was coming from and, above all, the absolute degradation of human dignity. Perhaps that is why my parents were very reluctant to talk about it. I became aware of all this as I grew into adulthood. As I write, a thousand images keep flashing through my mind, but I am unable to put these in either chronological or territorial order. I know that, at some point, after we moved to Uzbekistan, I was prepared and received my first communion and then, shortly afterwards, confirmation. But where and how these events took place I cannot recall. As I have already said, my parents did not want to talk very much about our ordeal in Russia. It was as if they wanted to blot it out of their minds completely. That is why my story is so sketchy.

During the war, the western part of Poland was occupied by the Germans where Polish people endured terrible tortures, persecutions, on-the-spot executions, mass arrests and deportations to concentration camps. There was a hidden German agenda that the part of Poland under their occupation was to be reduced to slave labour.

In all, nearly seven million Poles perished during the World War II, almost a fifth of the l939 population of Poland. It, therefore, saddens me greatly that, when the word “holocaust” is mentioned, people always think of Jews. They suffered terribly, but so did people of other nations. Yet somehow this has never been recognised and acknowledged in the same way. Not powerful enough lobby.

Nowadays, when people experience any kind of traumatic event, they go on and on about how it has changed their lives forever, and demand compensation and counselling. My parents, and millions like them, having gone through catastrophically tragic events — (two World Wars, the First and then the Second) and, having lost all their possessions, never complained, never asked for any hand-outs, and counselling was unheard of. Having been forced to face the reality of life, they just got on with it.

So, this is my story or as much as I can recall. At the time of writing we have two children: a daughter, Bozena, and a son, Janusz, and three grandchildren, for whose benefit this story has been written. We are happily settled in England and hold British passports, although we never rescinded our Polish nationality. Our parents are dead and are buried in this country, where we too will find our final resting place. In my heart, however, I have always remained a Pole and take great pride in being one. I hope that our grandchildren will share this pride — they are, after all, half-Polish.

P.S. No words are adequate enough to describe the ordeal we went through. The over-riding feeling of hunger was so strong, that years and years later I hated to throw away even the tiniest crumb of food in case I needed it later.