Having arrived at the railway station, we were brutally bundled into waiting cattle trucks fitted out with wooden shelves/bunks in order to pack in as many people as possible, some 50-70 people in one truck.

To understand why my family, the only one from the whole village, was arrested, I must go back to the year l918-1920 when, after the First World War, Poland regained its independence after some 123 years of being partitioned between Russia, Prussia and Austria. However, my country was still being threatened and attacked by Russia, and, faced with this renewed danger, the Head of Polish Armed Forces, Marshal Josef Pilsudski, appealed for volunteers to fight against this new aggression. My father, then 16 years old, volunteered. A decisive battle was fought on the banks of the River Vistula, just outside Warsaw when, despite being overwhelmingly outnumbered, the Polish forces completely routed and destroyed the Russian army. This was in August 1920 and, ever since then, this event, called by the Poles “Miracle on the Vistula”, is celebrated each year by Poles (wherever they are). In recognition of my father volunteering, as a reward, he was given a parcel of land by the newly-formed independent Government of Poland. People who were thus rewarded were called “Osadniki” which means “Settlers” on the new land given to them. And that is why my father was marked down for arrest and deportation to hard labour gulags (forced labour camps) in Russia, as he was considered to be a danger to the Russian nation and as a punishment for his volunteering.

At the outbreak of the World War II on 1 September 1939, my father was mobilised, but returned home after a few months following the collapse of Polish Armed Forces in the face of overwhelming aggression by Germany from the West and on 17 September 1939 by Russian invasion from the East. He was aware that he might be arrested, so he took to hiding in various places, hardly ever sleeping at home. As “luck” would have it, he was at home when the Russian soldiers burst in, which was just as well because they would have arrested the rest of us anyway, and we would not have had him with us to take care of us.

As I mentioned previously, we were then crowded into almost-unheated cattle trucks, and started our journey into the depths of Russia, which lasted about three weeks because on occasions we were shunted backwards and forwards and, during the course of this journey, a great number of people died either from exhaustion or were lost in transit. The journey was an inhuman nightmare. Because we were travelling in animal trucks, there were hardly any sanitary provisions - just one hole in the floor for toilet purposes. That in itself was monstrously hideous, exposing children, women and men to perform their private bodily functions openly. The stench was terrible. We were treated like animals. There was one circular cast-iron stove in the middle, which did not supply anywhere near the required degree of warmth. And, remember, we were travelling at the height of winter.

There was no supply of water either for drinking or washing. Now and then, the train would stop and so, during those stops, those who managed to pack kettles or pots, would gather snow into these containers, start up a fire, suspend these containers on hastily-prepared stands to boil the resultant melting snow, which would then be used for drinking or for washing needs. During those three weeks of meandering through Russia, it was well nigh impossible to have a proper wash.

Luckily, my mother managed to pack enough cooked food which, with careful rationing, just about lasted long enough till we reached our destination. She would share some of our food with those who were not so lucky. The train would, from time to time, also stop at stations for coke provisions, where hot water (kipiatok) could be obtained, together with some provisions. However, this was fraught with the danger of being left behind. I remember it was so cold that my mother’s hair froze to the side of the carriage, and I caught a bad chill and infection in my left ear which resulted in a perforation of my eardrum. This was only corrected when I was in my middle 60s. My lungs were also affected, a condition which has dogged me all my life. On one occasion, when there was actually fire burning in the cast-iron stove, the train moved off with such a sudden jerk, that I, standing next to it, put my hand on the hot pipe leading into the roof of the truck to steady myself, badly burning my hand. 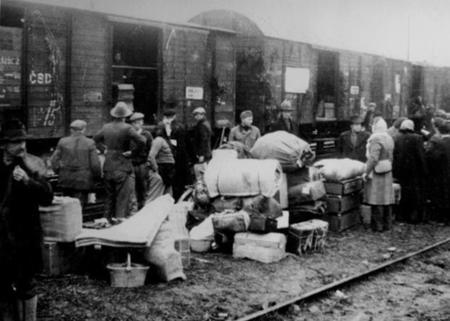 On the date of 10 February 1940, some 218,000 people were forcefully deported from Eastern Poland and, with further deportations during the year, this figure rose to almost 2,000,000. 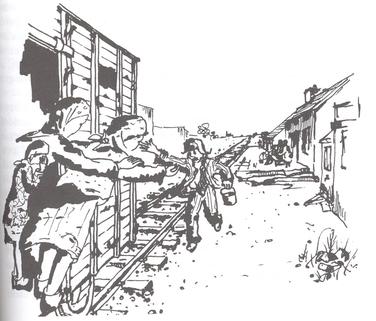 Polish families deported during the Soviet occupation of Kresy in 1940. (Courtesy Wikkiwand)

The train driver never gave notice of moving off; he simply started off, with people frantically climbing on board snatching their pots at the same time. Those who were not quick enough to board the train were simply left in the wilderness to find their way to the nearest railway station, or they simply perished.