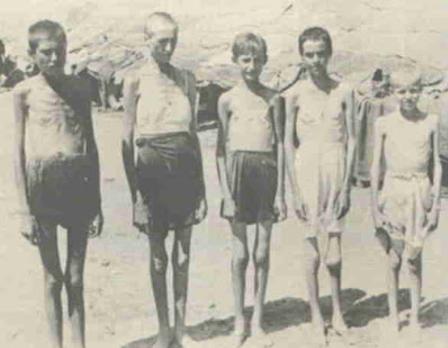 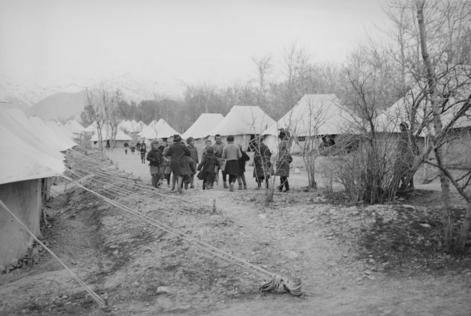 Some months later we the “orphans” and civilians were moved to Uzbekistan to a place called Guzar. It was here that I went down with severe dysentery and it was here that dead bodies were found in water wells. Mother’s unit was also moved to this part; she found me, and it was she who, by some miracle, cured me of dysentery. After a while, we moved to Turkmenistan and then on to Krasnovodsk (now Turkenbasy), a port on the Caspian Sea. There we boarded a ship where we were exposed to more appalling conditions. The ship was small and we were squeezed in like sardines. Sanitary conditions again were almost non-existent. There were only four toilet facilities on board and so, with people and children suffering from dysentery and other stomach disorders, it simply was impossible for everybody to avail themselves of these toilet facilities. Some children were so weak that they could not get up and queue for the toilet. The resultant stench was horrendous. My eye condition made things so much worse for me and, it was thus, that I awoke next morning to find a body on top of me.

I cannot remember how long it took us to reach the port of Pahlevi in Persia (now Iran). We, the children, were formed into groups; each group had an adult looking after it.

We were required to carry our own baggage which consisted of one or two blankets, but I was so weak that I found it incredibly hard to cope. As a result, I fell further and further behind our group walking to the nearest tent shelter, and I don’t know what would have happened to me if my mother had not found me. As she was attached to the military, her unit went ahead of us, but she knew that children were being shipped in, so she looked out for every ship arriving in order to find me. This she did and, being very cross with my guardian, soundly told her off.

After settling me in, which was on a blanket spread on the sand inside a tent, she had to return to her unit. A short while later, we boarded buses and were driven high up through the Elburz Mountains, at break-neck speed (drivers often being drunk) through hairpin bends to Tehran. There were a lot of accidents, where buses, unable to take a bend, simply rolled into the ravine below. I was always terrified of heights, so it was a nightmare journey for me. In the end, unable to bear it any longer, I crawled on to the floor of the bus and stayed there until we miraculously reached Tehran. There we were accommodated in tents (after undergoing more disinfecting procedures when my eye condition improved considerably) and, as the stay was prolonged, the Polish authorities in London organised schooling. That is where I went to Polish “school” for the first time in my life. Lessons were held in the open air.

Meantime, my mother, who by then was also in Tehran, found my brother, Gustaf, and me, and asked to be released from the women’s service in order to be with us. Her request was granted. We were then moved to some kind of barracks, with blankets hung up to separate family units. It was then that mother herself became very ill, and my brother and I had to struggle very hard to get her to the nearest hospital. I do not recall why we did not get any help from anybody.