Today is very long; the hours drag on and on. The sun starts to overheat everything. Essentially, the whole offensive is over, but I don’t feel like writing about it. What do I care about all of this - this war and mayhem? 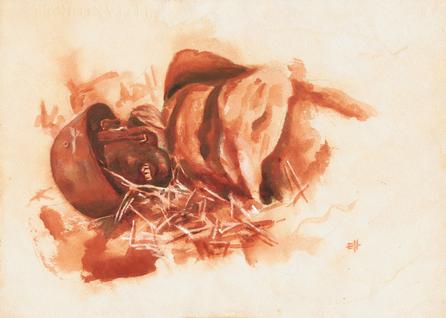 It’s been raining without a break. It’s strange that the tent isn’t leaking. We live in these tiny tents which are like dog kennels. They are small, uncomfortable and I can never properly stretch my legs. But they do have one benefit. I am alone and nobody tells me what to do. It’s quite pleasant sometimes to read in the evening by candlelight. A small white kennel, the tents are also white inside; it’s quite cosy. I can be alone with my thoughts. Until noon today and all day yesterday, I was in the port. They are unloading our equipment and I was guiding the trucks through the city to our camp. Everything we see now is a reminder; the forest and the green, the rain and the mud, the city people and the women. In fact, it is not a pleasant reminder at all. There is no joy in it. It’s like coming back to a miraculous land of fairytales and childhood, only to discover that not much is left of the former magic, only some canvas decorations; the play ended long ago…

Another lesson about war. At night we arrived here for a stop and Jurek showed me the cemetery. This is not the first military cemetery that we leave behind. I have seen many of them and each had a different atmosphere and mood. For example Tatischewo, forgotten fields at the edge of a forest, tiny crosses, mostly half-broken and also some recently added ones; cold, permeating wind chasing the last brown leaves across the grassland.

Dzalalabad: hot fiery clay, fiery heat from the skies, old, dark poplar trees, dogs trying their luck at the cemetery. Another cemetery in the sand close to the refinery at Khanaquin: the desert around, naked exotic Iraqi mountains, with a horizon, as if from a Tarzan movie. Dogs, ducks, boilers, the buildings of the refinery, the suffocating smoke of burning oil, barbed wire all around, crosses made of sheet metal or concrete. It was here that for the first time I found the grave of someone I knew from home. But other than that, the inscriptions on the graves were for me only empty, meaningless names.

It’s different here. When we read the names now by moonlight, we wonder how many of them belong to people we knew, friends with whom we were talking just recently.

A few mates from the officer’s school: little Palukeiski who, in Tatischewo in the snow, was going to training in summer shoes. Stasek Iwanovic from my team, a keen football player from Lwów, a reliable friend with whom I shared a tent, our first tent in the army in Tatischewo and Dzalalabad. And finally, Lucek Czerkowski, the quiet Lucek who, if it was necessary, would bully his team into such effort, that with him we felt we could conquer hell. I also found many from my former company: from the commander, Captain Janichki and many others, such as Sergeant Kowalski, Corporal Roszcok, Saniuk the view finder of our machine gun, next to whom I was sleeping for so long and, finally, the red-haired Mauer, known only as ‘the chestnut,’ with whom I spent time in the north in Volgastroi, and many others ...........

After the Battle of Monte Cassino

Finally we have finished the job. We’ve been working non-stop for a week. That means from evening until dawn. During the day we cannot move from our position; we are under constant enemy surveillance. The position is covered with a camouflage net. We managed to hang it on cables to enable us to remove it quickly, but we cannot go out anywhere. The position is small and very deep; a shelter which is probably strong enough to sustain a 105 millimetre field gun and that is all. We live in a large white house which is quite exposed, standing by the road, so that during the day we cannot go out or go in, or even open a window. In front of us there is a wide valley and on the other side of it there is a very tall line of summits, from the huge Monte Cairo, all the way to the Monte Cassino Monastery. These are all quite close. The range finder shows it is only three and a half kilometres to the monastery…

If you ever visit a battlefield, I would recommend that you never go alone. If there is someone to talk to, to make jokes with, one does not feel all this so strongly; it is easier to suffer the sight of decomposing bodies and their acrid stench. As for me I was walking alone. The only thing I did from time to time was to hum the German song, always the same one, ‘Lili Marlene’…

The smoke screen is filling the entire valley so that we cannot see the German positions. The Germans continue to sit quietly. At night they fire some mortars, but their artillery is silent for the second day. Only our guys shoot from time to time. They try to take aim and sometimes we can hear rapid, repetitive machine gun fire, but rarely. The weather is undecided; the mood is lazy rather than menacing.

At night the line was damaged again and I had to go to fix it once more, but now again everything is at a standstill. Before, even during the day, sometimes a jeep would go past or a motor cycle. But now there is complete silence. Everything looks dead. Houses are standing white and immobile among the greenery. Their windows are blind, closed. There are discarded cans, cases, canisters and cables. The cables are everywhere, on the ground, along the road, across the fields and in the air, from one tree to another, in all colours, black, red, yellow, they lie there without moving, but you can sense movement in them, a throbbing life… 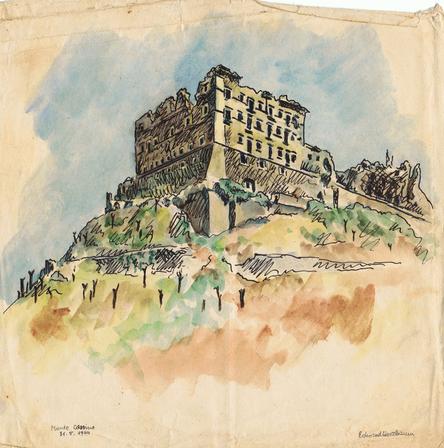 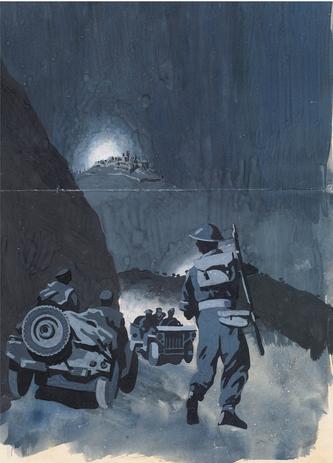 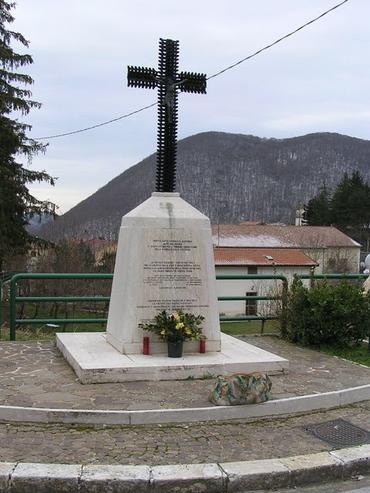 The night is chilly. We are smoking and going back slowly. I understand well why Jurek is embittered. Why? Why are they all lying here? None of them was prone to theatrical gestures, lofty words. They were just going about their business. So why? It’s easy to say that they were paying for the glory or that they fell to create a legend. But they didn’t care about the legend; they created it for us, not for themselves; the grim legend of Cassino.

I know nothing about politics, I don’t understand patriotism, but I can see one thing and that is the terrible, irreparable harm that has been done to people.

It’s getting tighter for the spirit; with each new name, it is as if a cold hand has been laid on the chest. On many of the graves there are no names yet, the records are stored in jars. How many more people that I knew will be found here? 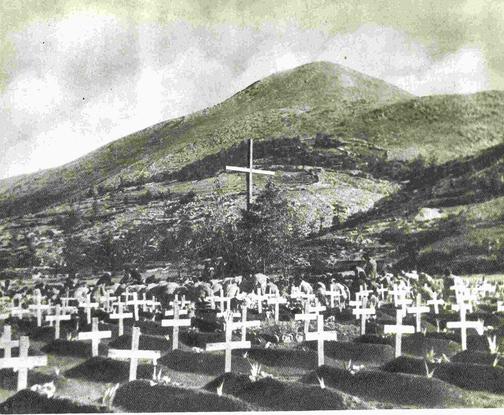 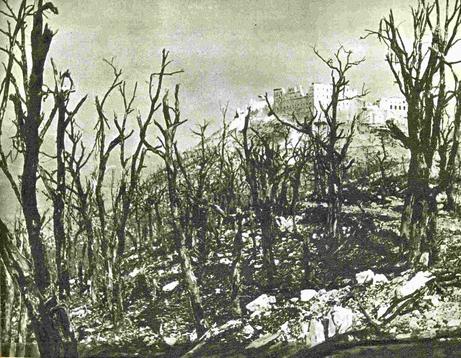