We sleep on wooden two level bunks on bare planks, of course, as there are no blankets or mattresses at all. Once in the night, the beds broke. One man was killed and several were crushed, and you can only imagine the screaming in the dark. Obviously we sleep fully dressed and at night it’s so cold that, in spite of being tired, we cannot sleep. 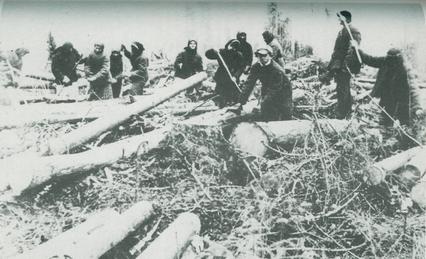 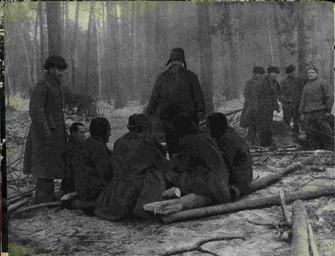 So what does our sub-camp look like? In the middle of a huge clearing there are a few barracks, a kitchen, a prison and toilets. The whole thing is surrounded by a tall fence and a double line of barbed wire and in each corner there is a tower for the riflemen. There is a gate and a small hut for the guard and that’s the whole dovecote. I should add that there is an acrid, characteristic smell, consisting of rotten herring, sweat, latrines and something which I cannot describe. The barracks are wooden, two stories high. 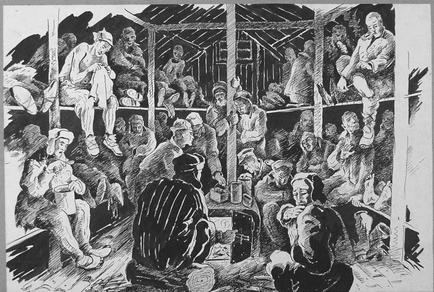 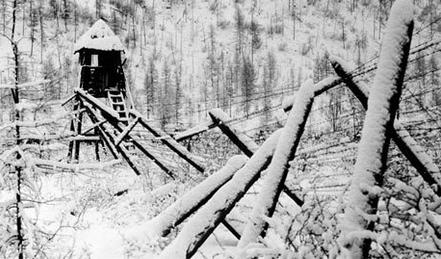 Hell is not an appropriate description, because it doesn’t describe anything but, if I talk about details, it is difficult to get an overall image. The commander, which means the master and ruler of our sub-camp, Diachenko, once a well-known Chekist, a secret police functionary from Ukraine, did something illegal and was sent to the camp. Immediately after his release he became the commander. He maintains what can be described as perfect order, given the situation, by means of small and never ending harassment. He is able to make our lives or whatever remains of them totally miserable. But it’s not only him. It’s everything, the conditions, the climate, the labour and the people. Everything is aimed at oppressing the prisoners and finishing them off as fast as possible. The commander’s staff is comprised of felons and criminals of the most serious kind. Barkoff, the vice commander, was imprisoned for a triple murder and several less severe crimes for which he received 15 years. Machmedov, the supervisor, boasts that he was caught during one of his numerous robberies and that an entire regiment of soldiers was mobilised against his gang. Another one of our functionaries butchered his entire family. Only one guy, Duganski, a gypsy, is here for stealing horses, or at least that’s what he says. All of them speak about their deeds with pride and other than that they behave like savages. They hit and kick everybody they meet.

But I should describe the whole camp. Labour here consists of cutting down trees. Over an entire, immense area of the forest, a network of sub-camps is set up, divided into so-called ‘uchastki’, meaning small parts, and each of these has its allotted area of the forest which must be cut.

The centre of our ‘uchastok’ is situated in an abandoned village on the banks of the River Szeksna. The entire neighbourhood was evacuated as early as 1937, and this spring it will be flooded. The commander of our ‘uchastok’ is allegedly a very good man, but no one has ever seen him, and apparently he doesn’t make any use of his goodness. Here locally, Diachenko is the master of life and death and, if he so wishes, he can set the dogs on anyone and it’s not just a threat, it did happen. And if he shoots someone, he would have no problem explaining it away.

If I cover myself with my jacket, it's cold from underneath and so as not to have such cold feet, I push my trousers down far enough to cover them and I put my shoes under my head. We are so crowded that men have to lie on the floor and it’s impossible to move around. At night, if someone needs to go and pee and everybody has a chilled bladder, his spot immediately disappears and he cannot find it again and he has to wait until somebody else goes out and he rushes to his place. Even then there are many of those, like myself, who don’t have their constant place at all, who sleep in the corridor or on the steps, so that going outside at night we always step on people.

At five in the morning there is a gong, the wake-up call. Disheveled, people get up from their bunks. They quickly do up the buttons on their trousers with numb fingers and they each grab their bowl or kettle or another vessel. There is no way to get washed in the zone. There is never enough water, not even in the kitchen and anyway it’s too cold and there is not enough time. We must stand in line to get our soup. People are organized into brigades, 20 men in each. Even before the wake-up call, the brigade foreman sends a few men to the queue for bread for the entire brigade. They issue pre- weighed individual portions depending on how many percent each man achieved during labour. To each portion of bread is added a small numbered piece of paper, like a streetcar ticket, for which we are issued soup twice a day in the kitchen. In the morning it’s almost clear water, maybe a little bit turbid, which tastes like dishwater. But that must be an illusion, because soap is extremely expensive here, more so than bread.

In the evening, the soup is sometimes a little thicker because it contains some raw oats, which are completely indigestible to the human stomach. There is no fat of any kind. We rarely get more than 500 grams of bread and often only 300 for the entire day. Moreover this bread is completely soggy, raw and sour. It’s no more than half the size of normal bread. We survive on practically nothing. If somebody had told me that one can survive even a week with such food, I wouldn’t have believed it. But now I can believe anything. We can barely swallow this breakfast because the bread has to be eaten with the soup in two gulps, before the gruesome show begins: the exit to work. When in the east the sky becomes grey and the stars which were shining a moment ago become invisible, fantastically-dressed people collect in the middle of the zone in the trodden-down space. They are wearing shorn fur coats, burlap bags or coats. They have rope or wire for belts, bare feet in straw shoes or just wrapped in rags. They are standing or rather stepping from foot to foot, each on his spot to overcome the numbing cold at least a little. It’s hard to describe the misery. People fight for ragged long johns from which they can make feet wrappings, and a piece of dirty paper is a treasure. Paper is needed to roll cigarettes. Black tobacco bought for a crazy price is rolled into any piece of paper; an old newspaper or a letter is a luxury. We are worse off here than in a desert because, if anything gets destroyed or lost, it cannot be replaced. Those who own an old mess can or a bowl are lucky. Others make themselves troughs from wood because, if you don’t have a vessel, you won’t eat. There is no way of borrowing anything. Everyone looks after only themselves and would never give anything away…