There again we were waiting for a few hours before they packed us tightly, like sardines, into freight cars, forty plus men in each. 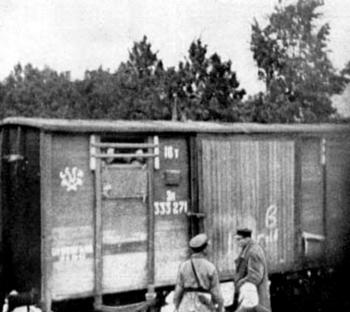 One day the action started. We were roll-called, counted, checked, rounded up and pushed from the room to the corridor, then back again and then to the yard and back to the room. We were searched, written down and cursed upon. Finally in the evening we were rounded up into groups and led downstairs and loaded onto lorries. In those lorries we were so tightly packed that we could hardly stand-up and then they made us sit down, so that any thought of jumping out or even making the smallest movement was out of the question. In addition three soldiers with rifles sat in each truck and in this way we were driven through the dark streets of Lwów to the railway station.

To some extent my silk shirt was the reason for my misery. It’s true that initially the lice wouldn’t stay in it, but it was also the reason that I caught a cold. Even in the barracks I had started to cough. In the train I managed to get a space on an upper bunk next to a small barred window. There were double bunks in the freight cars, but as usual not everybody found a place, no matter how tightly together the others were lying. Besides that, there was a hole in the floor for people to relieve themselves and a double grill across the window. It was hard to breathe even near the window. I was struggling to breathe all night and the stench was getting worse and worse. My neighbour, a Viennese man, was puffing and cursing me all the time because I refused to give up my place to him.

During the day it became hot and then hotter and it was downright impossible to breathe. We were sitting naked on the bunks, all soaked with sweat. I couldn’t even bring myself to look at my neighbour and each time he made a move I shuddered with revulsion. His body was sticky, flabby and shaky and lice were crawling across him like ants. Before we left, the soldiers threw a pack of herrings into the car and by noon we started moving. I had never eaten raw herrings before, and it was a thing good that I couldn’t bring myself to eat them this time. I say it was good because for the next three days they didn’t give us even a drop of water…