I was woken up by knocking at the door. In fact, they were hitting the door with a fist. Then someone was approaching the door, I heard voices, steps and a moment later, still half asleep, I was looking at grey uniforms and savage faces. There were three soldiers with rifles and long, sharp bayonets and one with a revolver. They told me to get dressed. ‘What, papers? Here they are.’ They looked at the papers, they searched, they looked under the pillow and finally they told me to sign something. ‘What is it?’ ‘Don’t ask, just sign it.’ They didn’t allow me to take a coat or hat. The tall one nudged me in the back with his revolver. I could see the scared face of my aunt and then I found myself on the dark street. I thought about the possibility of running away, but it was out of the question. The street was empty, the gates were shut and behind me there were three bayonets and a revolver. In front of one of the gates two of the soldiers waited with me, and the others went in. After a few minutes they came back with an elderly gentleman with an umbrella. Then they took us to the police station. There used to be a police station on the corner, and now it was occupied by a lot of militiamen in faded cotton clothes and some soldiers.

Everybody was half asleep and disorientated. Some had no stuff because they were taken off the street, ‘just for a moment, just to check your papers.’ Others had suitcases, backpacks and even a feather eiderdown. One fat, moustached guy next to me had so much stuff that when they told us to go out, he could not take everything and finally I had to help him. They loaded us onto a large truck and the fat man introduced himself formerly. ‘My name is Grapski.’ I shook his hand and I muttered something like, ‘I’m very pleased...’ but I wanted to laugh at these formalities. It was very cold as we were driven along the empty streets.

We arrived at St. Peter’s Street and they unloaded us into the yard of some old barracks. The sky was already getting grey when they took us out, one by one, frozen, to write down our names again and finally they took us to the third floor. There we were taken to a not very large room with one window and wooden bunk beds in the middle. We threw our stuff on them and I found a place next to my fat man and we waited. There were more and more people arriving. The room and bunk beds were full but they kept bringing more. Slowly it became day. I wanted to go for a pee, but the soldier at the door didn’t let anyone out. I asked him what would happen to us, but he shrugged and said, ‘I don’t know.’ I went back and stood by the window. Looking down I could see a fence and a street and behind the street some trees. Directly below me there was a sentry with a rifle and another one in the yard. A truck drove in again full of people who got down awkwardly. Soldiers with bayonets on their rifles were guarding them, as if there would have been any way of escaping from the enclosure. I was hungry. I wondered whether at night there would be any way that I could jump down onto the tree branch, but in fact I was on the third floor. ‘A little bit too far,’ someone said behind me as if he had guessed what I was thinking. I turned around reluctantly. The speaker was slim, not very young, but he had an interesting, youthful face. He smiled a little cynically, but something made me hold back the unkind word which I already had on the tip of my tongue. Instead, quite unwillingly, I said what I was thinking. ‘What will happen to us?’ The man smiled with some benevolent anger. ‘Maybe you could tell me.’ ‘So what should I do?’ ‘Lie down and have a rest.’ I turned around discouraged. The other man just laughed. ‘How old are you?’ ‘I will be twenty soon.’ ‘My God,’ he sighed, ‘twenty,’ and he went away, leaving me alone.

One night they woke me up. A soldier, this time without a bayonet, led me downstairs, through the back yard and again up some stairs. In a small, very brightly lit room in which the air was thick with cigarette smoke, there were several NKVD functionaries. One of them started to ask me what I had been doing before the war, what I was doing in Lwów, why did I live here and not somewhere else and how did I get into the prison. The others were standing or sitting down, saying nothing, they just kept staring at me. I wasn’t listening at all. I was answering automatically and I was thinking only, do they or don’t they know. In fact I was quite sure that they knew. So why were they asking me about everything except this thing? I felt relieved when finally they asked, ‘Have you ever been at...?’ ‘Of course I have not, I don’t even know where that street is.’ ‘I used to live at...’ ‘And do you know such and such?’ I decided that the best thing I could do was to answer nothing, just be surprised and shrug. ‘That’s alright.’ The guy who was questioning me seemed to be very happy that I did not know such and such. And then suddenly several of them pressed my wrists forcibly into the desk, as if I was a crazy man who wanted to attack people. I didn’t understand anything. I had no intention of trying to break free. I was sitting quietly. ‘So you don’t know, you don’t know?’ I still didn’t understand what they wanted, when I felt a sharp pain on the top of my hand. The pain was like a hot current going all the way up to my armpit, while my entire arm went numb. It was not a sting, it was a burn.

I pressed my jaw together so hard that the toothache was stronger than the pain in my arm and then I released. It seemed to me that it had gone. At any rate, I started to see again, because before that it had gone completely dark. I saw a watch on the table in front of me. It didn’t move, the second hand stood still. I closed my eyes and I kept them closed so long that I had no more breath left and I looked at the watch again. The second hand was moving, it had moved five seconds, but as soon as I started looking at it, it stopped again. Where was I? What was this pain in my arm? Oh yes, they were burning me with a cigarette. ‘I don’t know.’ ‘I haven’t been there.’ ‘I don’t know.’ Fifteen seconds. Then when I kept staring, the second hand started to move faster and faster, now it was running as if it wanted to make up for lost time. It was very silent in the room and I could hear the footsteps of the sentries outside on the gravel. ‘I was not, I don’t know, I don’t know.’ Two minutes. I didn’t know if I really couldn’t feel it or if I was only trying to persuade myself. Now they took the cigarette away but they kept holding my wrists. ‘You don’t know?’ The voice was full of curiosity and also boredom. ‘I don’t know.’ ‘I told you I don’t know where.’ Yes that was good. Now the sting was on the other hand. I wanted to convince myself that the second time was easier, that I felt less, but I couldn’t, it was even worse. I started to struggle, kick, pull away and then I was calm again. I looked at the watch in front of me. The second hand had moved around three times and then they let me go. I fell on the chair wet through with perspiration. The whole room started to spin, the chair seemed to fall and I leaned against the desk with my hands but my fingers were completely numb and my palms did not grip, the muscles in my arms were stiff as if after very heavy exercise.

In front of the desk, there was a small man in plain clothes and he stared intently into my face. He came round to look from the side and finally he shrugged his shoulders and said something like, ‘This is the wrong one.’ The soldier led me across the yard again. On the steps, on each floor, I had to wait for a long time to gather my strength. I stopped under a light and I looked at my hands. On top of one hand, right in the middle, there was a pink stain and a very small pinhead-sized drop of blood. On the other hand there was a large transparent drop of some liquid, like gelatine. Was that what hurt so much? Before I went back into the room, the soldier allowed me to sit for a few minutes by the window, to cool down. When I lay down on my spot on the bunk bed next to Mr Grapski, I fell asleep immediately and I didn’t even feel the hard boards or the lice and bed bugs which were regularly falling from the upper bunk… 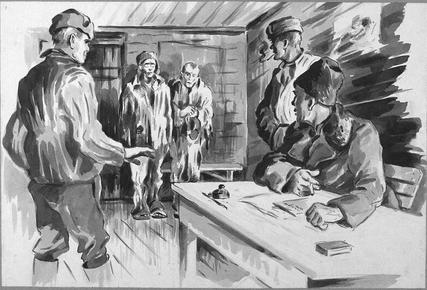 There was a young soldier sitting by a lamp, writing down personal details. He didn’t answer any questions, except with a short, ‘You will see.’ In the corner there were more arrested people.